Three Weddings and Some Fireworks
[The Marriage of Figaro, Los Angeles Opera] 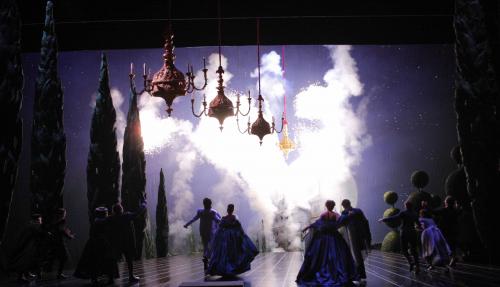 Calm satisfaction, and the multivalent comforts of discovering that mind and heart and soul have all just been fed exactly enough and not too much, are conditions neither easy to describe nor particularly interesting to read about, methinks, so I am on something of a fool's errand in attempting to write about Los Angeles Opera's current revival of its production of Le Nozze di Figaro [The Marriage of Figaro].  And yet here we are, I writing, you reading, so I'd best make the attempt.

Given that Mozart operas have not been hard to come by in this town, and that Figaro is one of the more beloved pieces in the standard repertoire -- consistently in the top 10, and frequently in the top 5, most-performed operas in any given year -- it is something of a surprise to me that last Sunday's performance was my own first meeting with it on the stage.  As usual, it's been my loss.  Figaro has immediately earned a place in my personal affections alongside the comic romances of Shakespeare, and makes a particularly fine companion piece to Much Ado About Nothing. (The semi-military somewhere-in-the-past-two-centuries costume design in the current production is not far removed from Kenneth Branagh's film of Much Ado 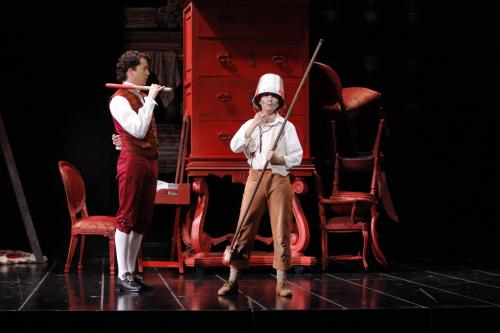 'sLa Folle Journée [The Crazy Day], ou Le Mariage de Figaro, which stands in the history of French theater in a position comparable to that of The Godfather Part 2 or The Empire Strikes Back in American film: the even more admired sequel to a much admired original.  Beaumarchais introduced the character of Figaro, the clever barber of Seville, in 1772, in Le Barbier de Séville, ou la Précaution Inutile.  Although derived from the long line of rascally servants in the commedia tradition, the figure of Figaro immediately acquired a life of his own in French popular culture.  A sequel was demanded, and Beaumarchais attempted to deliver one in 1778.  Beaumarchais was ambitious to exceed his earlier play in depth and sophistication and, to that end, included several speeches directly hitting on social controversies of the day, particularly the rights of women and the uselessness of much of the herditary aristocracy.  The censors would have none of it. While the text circulated surreptitiously high and low for years, it did not reach the stage until a version with much of the 'seditious' material still missing was finally mounted in 1784, to great acclaim.

Within two years, Figaro had come by way of Mozart into the hands of the poet/dramatist Lorenzo Da Ponte, who adapted it in to an Italian libretto for the court of Vienna, decorously striking out nearly all the overtly political material to leave a plot that belongs in part to the long and honorable tradition of French boudoir farce with just a soupçon of the long and honorable tradition of French satire of the foibles of the powerful. His text approved, Da Ponte finagled the commission for the opera's composition back in to the hands of Mozart, who produced a score that set a new standard for the melding of character, story and music.  Those who are not inclined to hand the palm along to Wagner can still argue, and not frivolously, that Figaro (and/or Mozart's other Da Ponte collaborations on Cosi Fan Tutte and Don Giovanni) remains unsurpassed as a seamless masterwork.

It must be said that, as masterpieces go, Figaro is a particularly lovable masterpiece.  Mozart and Da Ponte evoke no cruelty toward their characters, even when they are most mockable, and the happy ending -- all the right couples settled together in all the right combinations topped off with, in the text and on the LA Opera stage, a spontaneous burst of fireworks -- feels authentically earned. 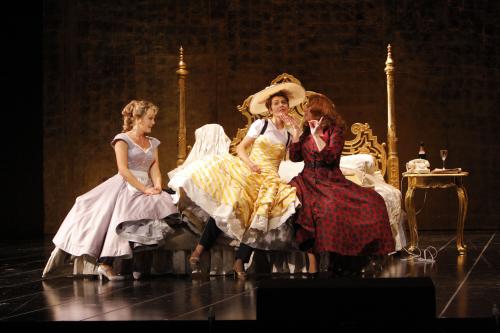 This is the third revival of LA Opera's current version of Figaro, under the direction of Ian Judge, and it is a smooth running saucy and sensual humanist comedy machine.  The proceedings are abetted by an able and likable cast, most making their Los Angeles Opera debuts.

The principal returning performer is Daniel Okulich, last seen here in harness to the thankless title role in The Fly -- an opera that got at least as many things dead wrong, musically and librettically, as Figaro gets right.  Okulich worked hard to be part of the solution to that insoluble production, and for his reward he has been brought back in much better circumstances.  He makes a fine Figaro, one who is not perhaps so clever as he would like to believe he is.

(Also returning from The Fly: Placido Domingo in his guise as conductor. We do love our Placido in this city, and he was welcomed loudly and affectionately each time he appeared.  Domingo is a focused and earnest sort of conductor, showing admirable energy in view of the fact that he has also been singing the lead in LA Opera's premiere production of Il Postino.  He hunches and hops quite a bit at the podium when he's at work, reminding me somewhat of the gopher in Caddyshack.  I mean that in the nicest possible way, I really do.)

The women's roles are essential to a successful Figaro, and this production is aided immeasurably by a delicious Susanna in the form of Marlis Petersen.  Of all the characters here, Petersen's Susanna is the one who seems never to be at a loss; she is vivacious, strong minded, quick on her feet, and immensely tolerant of those around her.  (Rebekah Camm takes over the role in the remaining performances.)  Meanwhile, in the trouser role of Cherubino, Renata Pokupik is comic gold, providing an array of limber twitches and slouches as the lust-besotted teen who is roughly two parts brain to three parts heart to five parts hormones.

Rounding out the principals, Martina Serafin is all patience and rooted sobriety as the long-suffering Countess Almaviva.  As the Count, Bo Skovhus makes an elegant lout, misusing his authority not so much because he can as because he does not notice that he is doing so.

There are three performances still ahead, October 10, 14 and 17.  As a Boy's First Figaro, this production serves very nicely and it was a lingering pleasure to have made its acquaintance at last.

Just before all joyousness breaks out at the end of Act 4, Mozart trots out perhaps the most effortlessly moving short stretch of music ever penned, at the moment when the Countess Almaviva forgives and accepts her husband, knowing full well that he is as flawed and unreliable now as he has been from the beginning.  Milos Forman made admirable use of that moment in his film version of Peter Schaffer's Amadeus

I'm still not quite sure how I feel about the costumes, which ranged from knee breeches to seersucker suits. But I do know that the sets were utterly stunning.

You're right: I should have singled out the set design as a great contributor to what works in this production. The "moonlit villa in the distance" set for Act 4, in particular, is a real stunner.