Drive-In Saturday:
Nothing Beats the Great Smell of Brutalism 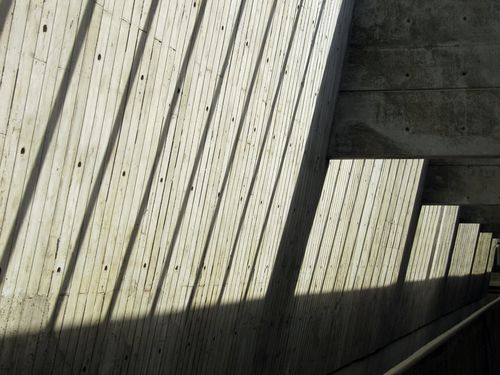 Brutalism: it's the 20th Century architectural style so many Love to Hate. Marked by harsh, unfinished concrete surfaces, windowless or admitting light from Caligarian angles, the style has become associated with cold authority and faceless bureaucracy, perhaps best exemplified by the much loathed City Hall in Boston.

Brutalist buildings have come in handy to suit the needs of a certain sort of filmmaker.  While they tend to be seen now as relics from an unfortunate past, locked into the era of the late 1950s to mid-1960s, Brutalist structures have served well in film as shorthand for The Dystopic Future.

CFCF is the nom sonique for Montreal-based producer/synthesist Michael Silver, whose most recent release,The River

, is reported to have been inspired by Werner Herzog's cautionary tale for opera lovers, Fitzcarraldo.  While Herzog is the progenitor of the music on the River, this video for an alternate version of the track "It Was Never Meant to Be This Way" looks to a different film maker: David Cronenberg.  The moody pulse of the piece is accompanied by radically reedited sequences from Stereo, one of Cronenberg's earliest films, made in 1969 and shot in and around the University of Toronto's Scarborough College, then about two years old.  Brutalist unease is on display in abundance. 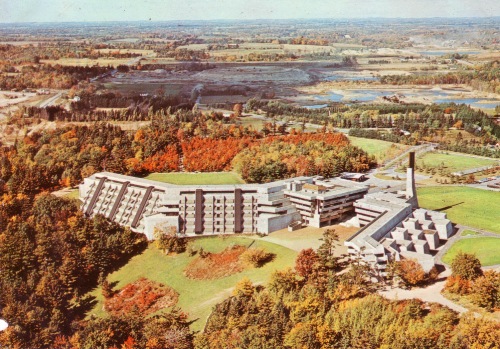 Stereo in its original form moves much more slowly than the edited music video version.  It lacks the explicitly nasty physical violence for which Cronenberg is known, but it touches on many of the themes that have marked Cronenberg's work for the rest of his career: mental telepathy, radical sexual tension shading into violent expression, science as at best untrustworthy and often actively malevolent, and so on.

Cronenberg filmed Stereo without sound, reportedly because his equipment was too noisy to make live recording of dialog practicable.  The film's soundtrack instead consists of a series of voiceovers, purportedly by CAEE scientists, punctuating long silent sequences that often move at the truly glacial pace so beloved of self-consciously serious film makers of the late 1960s. The black and white cinematography—Cronenberg shot and edited the film himself—effectively heightens the off-putting architecture: large physically empty spaces become spiritually empty and more than somewhat threatening in themselves.  Personally, I find the architecture more interesting than anything that is happening in it.

Here, for those who have an hour available, is the complete original version of Stereo:

I have a personal favorite Brutalist building: the University Art Museum [now the Berkeley Art Museum] and Pacific Film Archive at UC Berkeley. Constructed between 1967 and 1970—and therefore still relatively new when I got there in 1974—the Museum is structured internally as a series of descending terraces, arcing around nautilus-like from top to bottom. The topmost gallery was (and presumably stil is) devoted to displaying the Museum's substantial holdings of the work of abstractionist Hans Hoffman.  The exposed concrete works remarkably well as a display environment, particularly but not exclusively for modern and contemporary work. Natural light penetrates the space well, making it a surprisingly airy pile o' slabs on a sunny day. 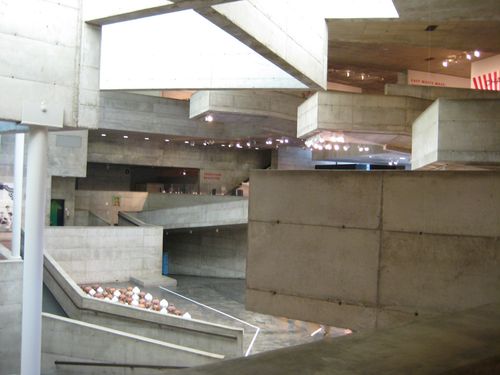 Regrettably, the Museum building has been found to be seismically deficient—something of a concern when a branch of the San Andreas Fault is literally only a few blocks away.  Additional support structures have been added, keeping the place open but somewhat compromising the original design. The current building will, however, be closed in the next few years and the Museum and Film Archive moved to a new location in downtown Berkeley, still to be constructed.

I assume demolition will be the ultimate fate of the original Museum building.  That saddens me, because I am surprisingly sentimental about the place after spending so much time inside it in my Bright College Days. (I say "surprisingly" because Brutalism is an obvious nominee for Least Cuddly Architectural Philosophy Ever.)  Perhaps, after the collections have been moved downtown and before the wrecking ball arrives, some enterprising filmmaker can put the space to use one last time, to preserve its memory.  Or as a cool place in which to whack zombies.

From my office large plate glass windows, I have a beautiful view of both the Trinity River and the Clear Fork Branch. Beyond are small but discernable headstones and crosses in the historic Oakwood Cemetery.

And smack dab between all this awesomeness are the two new junior college downtown campus buildings; "brutalistic" concrete behmouths that literally piss me off every M-F morning.

I can't stand them, "ugly" is not nearly sufficient an adjective for the crap they are.