The Turks have a homely proverb applied on such occasions: they say 'the fish stinks first at the head', meaning, that if the servant is disorderly, it is because the master is so.

—Sir James Porter, Observations on the Religion, Law,
Government, and Manners of the Turks
(1768) 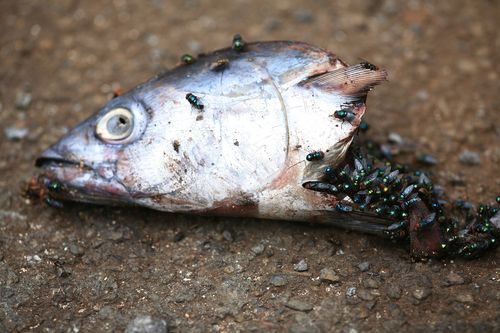 This post is a continuation or further update of my previous post on the near-instantaneous removal by Los Angeles' Museum of Contemporary Art (MOCA) of the mural it had itself commissioned from the Italian street artist, BLU.  We rejoin our story, already in progress . . . .

MOCA was initially surprisingly reticent in explaining what had occurred and why.  In particular, even after the museum eventually issued a statement, there was no clear indication of the extent if any to which the decision lay with art-dealer-turned-MOCA-Director, Jeffrey Deitch, the ostensible moving force behind MOCA's upcoming exhibition devoted to street art.

The Los Angeles Times has now filled some of the gaps in an article by Jori Finkel, who interviewed Deitch by phone.  Deitch is quick to claim complete credit or blame for the decision to paint over the work even before the artist's own paint had a chance to dry:

'This is 100% about my effort to be a good, responsible, respectful neighbor in this historic community,' Deitch said. 'Out of respect for someone who is suffering from lung cancer, you don't sit in front of them and start chain smoking.'

He rejects the talk of censorship.  'This doesn't compare to David Wojnarowicz.  This shouldn't be blown up into something larger than it is,' he says, describing a curator's prerogative to pick and choose what goes into a show. 'Every aspect of the show involves a very considered discussion.'

The unfortunate thing, he acknowledges, was the timing, as the artist began the mural while Deitch was out of town earlier this month for the art fair in Miami. . . .

When he returned from Miami and saw the mural, then more than halfway completed, Deitch said he made the decision to remove it very quickly, unprompted by complaints.  'There were zero complaints, because I took care of it right away.' He asked Blu to finish the work so it could be documented as part of the exhibition and appear in the accompanying catalog.

So, unlike Smithsonian Secretary G. Wayne Clough who crumbled precipitously when Republican lawmakers looked meaningfully in his general direction, Jeffrey Deitch proudly declares himself the sort of visionary cultural leader who succumbs to pressure even when none is applied.  That he had the artist finish the work so that it might be "documented" at the moment of its destruction is almost too much.

Deitch is right about one thing: this is not censorship in the usual sense. Censorship at least has the courage of the censor's misguided authoritarian convictions.  This is merely unprincipled cowardice, with a soupçon of vandalism.

Deitch's apologia confirms that for him market forces and the concomitant desire to be popular and well-liked trump any other concern.  Sad, particularly for the museum he is tasked to lead.

The artist's blog for today (14 December) features a new photo of the whitewashed wall, and this comment:

this time news are going faster than my blog
i will make a short resume:

1. Moca asks me to paint a mural
2. I go to L.A. to paint the piece and I almost finish it
3. the Moca director decides to erase the wall
4. on the next day the mural is erased by Moca workers

5. journalists are still not sure if this can be called censorship
so they start asking my opinion about that

Still unanswered: What rights does the artist have, or will the artist choose to assert, under California's Art Preservation Act?  Did the unfinished mural qualify as "fine art" under the statutory definition?

“Fine art” means an original painting, sculpture, or drawing, or an original work of art in glass, of recognized quality, but shall not include work prepared under contract for commercial use by its purchaser.

Can MOCA assert that it had "purchased" the uncompleted work "for commercial use" rather than gratia artis (for art's sake), so that the mural is not to be deemed "fine art"?  And if not, how do Deitch and MOCA avoid culpability under the statute's broad prohibitory language?

UPDATEs 1129 & 1156 PST: The Los Angeles Times did not have a direct response from the artist when it published Jori Finkel's piece linked above. Now they do:

It is censorship that almost turned into self-censorship when they asked me to openly agree with their decision to erase the wall.  In Soviet Union they were calling it 'self-criticism.'

Deitch invited me to paint another mural over the one he erased, and I will not do that.

The new LAT post also includes the best photo I have yet seen of Blu's mural in its most-completed state.  The photo is credited to MOCA, so it is presumably a part of the Director's promised "documentation" of the work.

And Christopher Knight has more to say, including a retrospective look at the last time a wall of the same building caused a kerfuffle.

UPDATE 121610:  Apparently, "curatorial choice" is the flag being flown by Jeffrey Deitch and those who would justify his mishandling of this case.  As Hrag Vartanian reports at Hyperallergic the artist, in a further update to his own blog, begs to differ.

Hyperallergic has also posted a very good overview of the artist and the context of this mural within his work to date.

Posted at 09:44 AM in Art and Museums, Arts and Culture At Large, Legalisms | Permalink | Comments (0)