In the third segment of my four-part ramble through the details of my 2010 List of Favoright Musics, we turn away from the exciting world of alt-pseudo-new-nu-Classical and step toward . . . what?  Naming styles and genres is such a puzzlement these days.  I suppose much of this group would be classed as "indie," and there are enough guitars 'n' drums 'n' basses involved to qualify most of it as "rock," but then what do we do about all the violins and saxophones and oddly tuned percussion and such?

The connection between these five items lies in their fondness for rhythms and the way rhythms can play and phase off of one another.  The "pulse" of the High Minimalists (Riley, Reich, Glass) is often present, albeit popularized and played with.  Also, you could in theory dance to much of this music, though you might well draw strange and troubled looks from passers-by if you tried it. Menomena, a trio from Portland, OR, seems always to be described as an "experimental" band, and I cannot say why.  Nor do I find that I can really describe the thing that Menomena does . . .  or the things that Menomena do.  In some ways, these are conventional pop songs; in their details, they are nothing of the sort.  Even when they are setting out the traditional guitars, drums and bass, and kicking the traditional gluteus, it all comes out sounding New and Wrong.  Give "TAOS" a try, below.  It is just a song about being awkward and inebriated at parties, and yet it has a sort of galactic sweep to it that the material cannot, in itself, justify. Which is to say, it's really neat.

If Vladimir and Estragon had an iPod with them by their tree, this is what would be on it.  And then they'd try to hang themselves with the earbud cord.  Smiling. 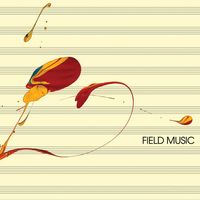 Always trust content from the Brewis Brothers.  I have frequently seen Field Music compared to early XTC, and it does share with that band an utterly English sensibility, a love for tidy song structure, and a fondness for a clickety-clacking rush of crosstalk among the guitars and drums.  I personally find Field Music more satisfying, even cuddly in some ways.

Field Music (Measure) is, in the physical world, an old fashioned double album, 20 tracks concluding with a 10-minute impressionistic sound collage.  While there is a readily recognizable Field Music sound throughout, there is also splendid variety of musical ideas flying in every direction, with harmonic twists enough to maintain constant interest.

This video for "Let's Write a Book" is a rush of Pop Art, like a moving grooving James Rosenquist painting, with the Brewis lads themselves getting the Roy Lichtenstein benday-dot treatment.  The title track is available below. 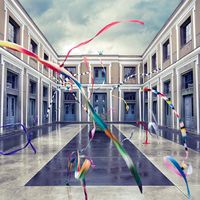 Denmark's Efterklang is the group here that hews most closely to the alt/new classical mode I have been on about in previous segments.  They recorded their previous album, Parades, twice: once in the studio

and once (as Performing Parades) with the Danish National Chamber Orchestra

.  In some ways, if they were just starting out somewhere in Brooklyn, they'd be a perfect New Amsterdam ensemble.

As with Menomena, I am having difficulty articulating just what works so well in Efterklang's music.  At the same time, I am wondering whether perhaps I have put this album too far down on my List.  So many arbitrary decisions go into the process: what's an enthusiast to do?

Listen to the piano part in "Modern Drift" below, or the big violin break in the middle of "I Was Playing Drums" belower, and try not to think Reich/Glass.  Yet Efterklang is its own thing, and that is a happy wonderment.

If there was a "PostMinimalClassicism" merit badge, Efterklang would be out in the woods earning it. 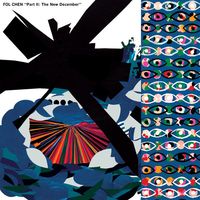 Although for reasons of its own the band calls no attention to the fact, beneath the floorboards of Fol Chen lies the still beating heart of the late, lamented Bedroom Walls.  Now, however, what was once elegantly eccentric chamber-pop comes tricked out with an attic full of hip-hop trickery, electro-paraphernalia and just plain noise, as well as an inscrutable underlying post-apocalyptic conceit.  I've bought into it—here it is on my list, right?—but many will just find the twitching and gesturing annoying.  Ignore that impulse, if you will.  In the end, with some little effort, this is fine and pleasurable stuff. 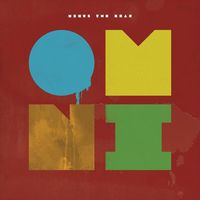 Minus the Bear is the musical equivalent of hot buttered popcorn: virtually no nutritional value, but once I start consuming it I can't stop until's it's all's gone.

The band does not pretend to depth in this collection—nearly every song is about sex or drinking or, occasionally, drugs, and the combinations in which these things might be indulged, and the surface level complications that may follow therefrom if you catch my meaning if you get my drift—nor does it insist that Attention Must Be Paid to its Profundity.  What Minus the Bear brings to this material that others do not is simple in theory and hard in practice: this band is a beautifully tuned and virtuosic music-making machine, its parts locking together with the precision of a Swiss watch.

If it is the guiltiest pleasure on this list, at least that pleasure is genuine and earned.

NEXT: In the final installment of this survey, people singing songs with guitars, getting back to the land, communing with nature, crying in the chapel, wishing you were here, and wallowing in their yearning, hopes, and dreams.  Now that's what I call music.

These posts are remarkable. It will take me a year of listening to catch up. Very amused by your "teaser" for Part IV, too.