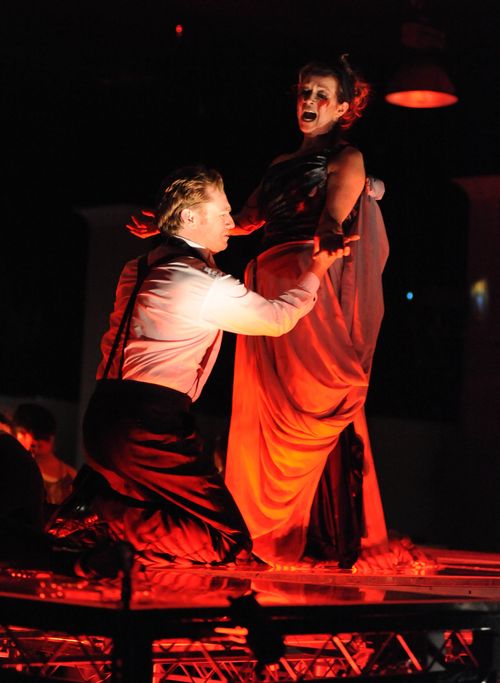 If Tolstoy had wanted proof from the ancients of his dictum that "each unhappy marriage is unhappy in its own way," he need not have looked any further than the marriage of Jason and Medea.  "Seduce and abandon" was a standard operating technique for the Greek heroes, but Medea is the only object of that treatment who is known to have fought back, with famously gruesome and horrible success.  Roberto Calasso writes

Right from the start, beautiful as she was, Jason felt a strange repulsion for Medea.  She was a woman who knew only two states: either hopeless unhappiness, desertion, lonely misery, helpless rejection; or dazzling, lightning-swift power.  It was conceivable that one might go through all kinds of adventures with such a woman (and she could be pretty useful too, more so than many a hero); but could you live with her day in day out?

Jason's answer was: no, he could not.  And that made all the difference.

Saturday evening, Long Beach Opera began its 2011 season with an adaptation of Luigi Cherubini's 1797 Medea.  The opera has been shorn of its choruses and pomp, translated into English, slimmed down from three to one 100-minute act, and peppered with textual interpolations from Euripides' version of the story.  The resulting piece is a portrait of a marital pressure vessel, building from the start to an inevitable explosion.

Cherubini, an Italian who had a long and successful career as a composer and head of the Conservatoire in Paris, was much admired by Beethoven, and the surface similarities between the two men's music are striking: you could substitute Cherubini's Medea overture for, say, the third movement of Beethoven's Symphony No. 7, and the listener who did not already know the symphony might never notice.  It is grossly unfair and a wild simplification, but not unhelpful in terms of how the two are currently assessed, to think of Cherubini as a sort of Electric Light Orchestra to Beethoven's Beatles, with the key difference that Beethoven actually claimed to have been influenced by Cherubini, and is known to have admired Medea in particular.

Cherubini's opera is not based directly on Euripides, but on Euripides as filtered through the French sensibilities of Corneille.  We join Medea's case in medias res, Jason having abandoned her to pursue an advantageous marriage to Dircé, daughter of Creon, King of Corinth.  Medea objects vociferously to the arrangement.  Because she is widely feared and distrusted, she is ordered into exile by Creon, on pain of death.  She negotiates one extra day to compose herself for departure, then uses it to exact her ghastly revenge: Creon and his daughter die engulfed in poisonous flames generated by Medea's "wedding gift," and Medea confronts Jason with the corpses of his young sons, freshly murdered by their own mother.  (As the Wabbit sez: "What do you expect from an opera, a happy ending?") 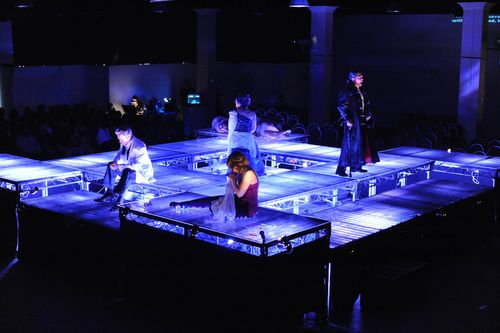 Long Beach Opera is mounting its version of Medea in a now-empty big-box furniture store.  The stage is above, and surrounded by, the audience.  The lighting is largely from beneath, through gratings and plexiglass.  The six singers remain on stage throughout, curling up in their corners when not needed.  The arrangement is effective overall, despite occasional sight line issues, and provides the sort of intimacy with the performers that is a Long Beach Opera hallmark.  For the tightly coiled emotion of Medea, that intimacy makes for a riveting time.

Both the costuming and the performances take a mixed modern-meets-archaic approach.  Creon struts in leather.  Jason sports half-undone formal wear and the aura of a scruffy and overmatched Brad Pitt.  Dircé, in the production's one actual misstep, is a high-strung party girl taking refuge in the bottle, a sort of Paris Hilton by way of Kim Kardashian with an unhealthy dollop of Snooki. Playing off against these contemporary types is Medea, one side bedecked with curling tatoos (snakes are implicit in all that Medea does), in the company of her slave/nurse Neris and two nameless Women, who may be real or may be merely projections of Medea herself.

At this point in its history, Long Beach Opera seems to operate as something of a repertory company, filling out its casts from a pool of recurring performers.  Every member of the Medea cast has been seen here before in recent years.  It is a strong, strong bench on which to draw.

Central to it all in this case is Suzan Hanson as Medea.  She first sang in Long Beach in 1995 (Les Illuminations), then returned as a sterling Brünnhilde in the second half of LBO's mini-Ring in 2006.  She has reappeared in most every season since, most memorably last year as Pat Nixon in Nixon in China, a character who is a more than polar opposite to Medea.  As is only right, Hanson's Medea dominates all comers, eliciting pity or fear as the need arises with a remarkable economy of gesture.

As Cherubini wrote it—or at least as the opera has been revised and refined by conductor/director/designer/dramaturge-about-town Andreas MItisek, in collaboration with Suzan Hanson—Medea is essentially the only character who receives more than one major aria.  The other performers make the most of what they are given.  Their characters cannot but fall before the primal force that is Medea, but they fall with grace and point.

Ani Maldjian has become LBO's first choice for high-wire soprano singing combined with a great grip on a character.  To her credit, she derived all the pathos available from the somewhat misguided direction she was asked to pursue as the unfortunate Dircé.  She delivered her character's principal aria flawlessly, but my own view of whatever she was doing at the time was entirely blocked by Medea's three recumbent companions. (The Los Angeles Times suggests that autoeroticism was involved, in which case perhaps I don't want to know.  It would just have compounded the other errant directorial choices Maldjian so adroitly overcame.)

The role of Neris is performed by mezzo Peabody Southwell.  Here, I hope I may be forgiven for confessing that I am something of a Peabody Southwell fan-boy: her performance as the Fox two years ago in The Cunning LIttle Vixen (Ani Maldjian was the memorable Vixen in question) was a pitch-perfect bit of characterization, and her turn in the trouser role of Ramiro in Vivaldi's Motezuma was central to selling the otherwise ridiculous (but it worked!) premise of that production.  She is an extremely gifted singer-actor, with a voice that commands attention whether she is singing or speaking.  While her character served largely as a one-third of the company of Women surrounding, supporting, and acting for Medea (Ariel Pisturino and Diana Tash are Woman 1 and Woman 2, respectively), Southwell stepped into her own with Neris' searingly gorgeous aria (to a moving bassoon accompaniment) pledging unending support and solidarity to her wronged mistress.  (The company has not let slip the details of its casting from the remainder of this season.  I am hopeful we will see more of Peabody Southwell, and every other member of this cast for that matter.) 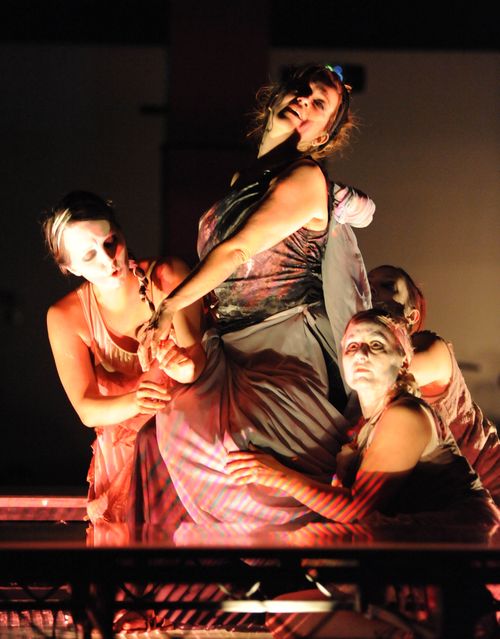 What's that?  You want to know about the men in the cast?  Do they matter in the face of such daunting women?  They do, I suppose.  The role of Jason is somewhat thankless: he may be a hero, but he has nothing to offer in the way of a defense against the provocation he has given Medea.  Ryan MacPherson suggested a Jason whose heroic days are behind him, trading on his tales of adventures gone by, genuinely puzzled as to how things have gone so horribly wrong and why Medea won't just Move On.  Roberto Gomez, as Creon, continues his run as Long Beach Opera's perpetual king: whenever there's a king needed these past few years, whether serious or silly, it has fallen to Gomez.  His Creon is trying So Very Hard to maintain control of the situation, to no avail.

Medea is not a rollicking walk in the park or a jovial feel-good anything.  It is a persuasive telling of one of the core tales of Greece, one of those stories that compels us to confront the fundamental bloody messiness of life and the terrors that likely lurk just beneath the lovely surfaces of the world.  It is another high point for Long Beach Opera and for all involved in putting it together, and you will not regret having looked it in the eye and taken it in through your ears.  Go, and see for yourselves.

Two performances of Medea remain: at this writing, tickets are definitely available for an added performance on the afternoon of Saturday, February 5; the closing performance the following afternoon may have some limited availability, but is officially "sold out".

Ah, but that I could go see for myself (now my turn to turn a bit greenish . . .), but at least I have this incredible review of yours to savor. Loved the subliminal captions, and of many delicious comments, I'll pick out this: "a Jason whose heroic days are behind him, trading on his tales of adventures gone by, genuinely puzzled as to how things have gone so horribly wrong and why Medea won't just Move On."

that's the sentence I picked out too as most poetic. wish I could see this opera too. thanks for a another great review
Bridge