Home Archives Profile Subscribe
A Ramble on Gavin Bryars
Miles Must Go Before We Sleep
[Benjamin Britten, The Turn of the Screw,
Los Angeles Opera] 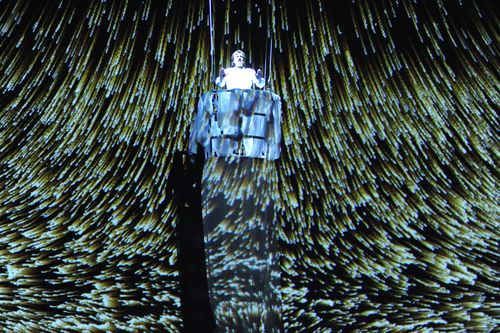 In the heady days of the late 1960s, there were filmgoers who would attend screenings of Disney's Fantasia or Kubrick's 2001: A Space Odyssey for the particular purpose of enjoying those films in the company of their favorite drug, to be ingested at Just the Right Moment so as to reach the height of its effects concurrently with, say, a corps of dancing mushrooms or astronaut Dave Bowman's encounter with whatever it is he has his encounter with. The film was thus more than a film, it was a Trip.

My advice is: Don't do drugs, kids.

Instead, obtain a ticket to the remaining performance of Philip Glass's Akhnaten at Long Beach Opera, next Sunday afternoon, March 27.  Because Akhnaten is a Trip.

More pageant or oratorio than true opera, Akhnaten (1984) was the third of the trilogy of biographical theater pieces composed by Glass during that period, following Einstein on the Beach and Satyagraha (re Gandhi).  Akhnaten was composed at roughly the same period as the film score for Koyaanisqatsi

and with that score marks the full arrival of the composer's mature style, and Glass's full embrace of writing for full orchestra rather than the small keyboard-based ensembles of his earlier, more purely "minimalist" work.  While Akhnaten has been performed by several companies in the U.S., Long Beach Opera's production marks its long overdue West Coast premiere.

Akhnaten is concerned with the fleeting 17-year reign of the pharaoh of that name, and with his ultimately failed attempt to adopt a new, monotheistic brand of religion.  In a series of scenes, we are shown the funeral of Akhnaten's father Amenhotep III, Akhnaten's coronation, his institution of religious reform, his fall at the hands of a sort of Egyptian counter-reformation, and the reduction of his great city to a handful of dust.  In the company of his mother and of his wife, Nefertiti, Akhnaten is last seen making his own way to the afterlife of memory.  The action proceeds largely through a series of tableaux, and the vocal heavy lifting frequently falls more to the chorus than to the principal soloists. 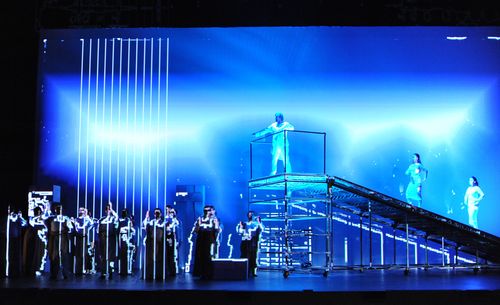 More so than most operas, Akhnaten could potentially succeed purely at the level of sound, with no visual or dramatic content at all.  The score is filled with Glass's trademark moiré pattern of shifting chords and arpeggios—the string section contains no violins, and the rhythmic stucture is punctuated by low brass—and easily produces a receptive quasi-hypnotic state.  Most of the text, derived from period sources such as stelae, tomb inscriptions, and The Egyptian Book of the Dead, is sung in ancient languages that to a contemporary listener become simply another element of the pattern of pure sound, into which we can ease ourselves and become lost.

Long Beach Opera, its famously straitened budgets notwithstanding, has elected to hypnotize the eyes as fully as the ears.  The tangible scenic elements are minimal: shifting ramps, cardboard boxes, a balloon-basket of sorts in which Akhnaten ascends while delivering his grand "Hymn to the Aten."  Those elements and the performers are, however, awash in a series of elaborate interactive video projections created, largely in real time, by Frieder Weiss.  Weiss has devised a system of cameras, processing power and projection to take the physical action on stage as his input and to return it as patterns and particles whose movements and changes respond directly to that action.  They shimmer, they ooze, they spark, they bubble, they overwhelm and absorb. 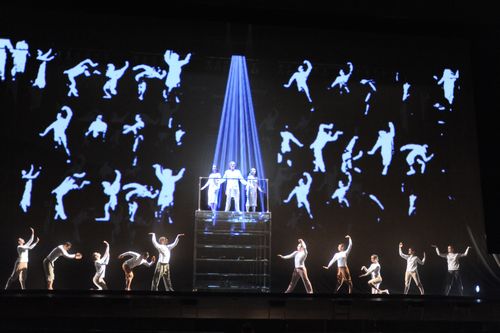 In a more plot- or character-driven piece, all this zippy visual ornament would only distract, but it works—and occasionally amazes—as an environment for the ideas and abstractions at the heart of Akhnaten.  On stage, the soloists and chorus are supplemented with dancers of the Nannette Brodie Dance Theatre, whose bodies and stark poses provide much of the fodder for Weiss's video manipulations.

Even more so than in last season's Nixon in China, the Chorus fulfills its central vocal role with both power and finesse, especially in the opening funeral sequence and in the Act III overthrow of Akhnaten's regime.  The solo parts are often entwined within the choruses, limiting the opportunity for those singers to stand out. The major truly solo roles are those of Akhnaten himself, written for countertenor, his wife Nefertiti (mezzo/contralto) and, to a lesser degree, his mother Tye (soprano). These are "characters" in only the most general sense, and Glass does not call for the sort of human drama that is so often a specialty at Long Beach Opera.  In a largely ensemble-based work, Peabody Southwell shines in particular in the role of Nefertiti.  Her splendidly burnished tone and seamless connection with the orchestra continue to impress and I hope, as I have said I do most every time she has sung here, to be hearing much more and soon.

Direction and design of this production is credited to LBO conductor and artistic director Andreas Mitisek, though I suspect he would freely share that credit with Frieder Weiss and Nannette Brodie, given the importance of their contributions to the whole. As conductor, Mitisek leads his orchestra in a persuasive accounting of Glass's complex score.  From my position toward the front of the house, the orchestral sound was full and satisfying, conveying urgency or sublimity as needed.

Long Beach Opera has pressed its resources toward their limits in this production, and it must be acknowledged that, here and there, some seams did show the strain.  The sound system occasionally produced an inexplicable random popping at stage right.  Set changes between scenes were neither as quick nor as quiet as could be wished.  Jochen Kowalski's Akhnaten was bedeviled by pitch issues in his duets, but he seemed to come through when it most counted in the "Hymn." The decision to perform the opera in two acts rather than three made the third feel unnecessarily truncated.  (As an audience member, I would not have objected to a Wagner-length presentation of Akhnaten with no intermission at all, but I suspect that is more than we should reasonably demand of the hard-working performers.)  None of these issues was a sufficient distraction to undercut the total impression of the Long Beach Akhnaten, which is that of a hitherto hidden marvel brought stunningly into the light. 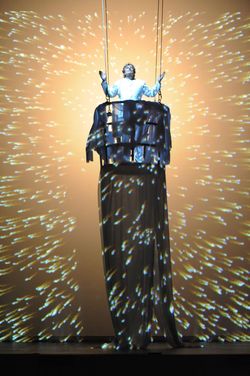 The Long Beach Press-Telegram interviewed Frieder Weiss on his video technique.  Weiss acknowledges that standing in the blaze of his projections is not the most pleasant experience for the performers.

At intermission during Saturday night's premier, I quipped: "With all the exotic video tech on display . . . we may have to rename it iKhnaten."

Ah, and now it is the turn of us East Coasters to be jealous! I don't even like Glass, and yet I really, really, really would have liked to be there for this. Thanks for taking us there at least vicariously!