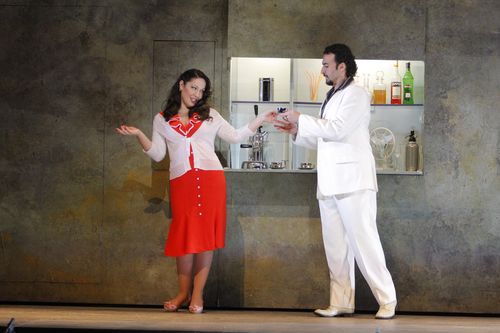 Giaochino Rossini was all of 22 years old when he premiered Il Turco in Italia (The Turk in Italy) in Milan in 1814.  It was his eleventh opera.  He gave up opera after 1829, having composed some forty of them, and his output as a composer tapers off markedly after the early 1830s.  He lived until 1868, devoting much of the latter part of his life to his passion for food and cooking and devising Tournedos Rossini, among other chefs d'oeuvre later included in chefs' oeuvres the world over.  I'm feeling inadequate, how about you?

The Turk is identified by its creators as a dramma buffo, a "comic drama," but drama is the last thing on its mind.  The plot is adapted from an earlier opera of the same title; Rossini's librettist was Felice Romani, a veritable libretto-factory of a fellow who would later be responsible (culpable?) for the texts of numerous bel canto hits by Bellini and Donizetti.  While the story is set in Naples, most of its mechanics are as old as Rome or older:

The traditional aging husband, Don Geronio, has himself a vibrant and flirtatious younger wife, Fiorilla.  She, at the moment, is probably carrying on with the vapid local tenor, the aptly named Don Narciso.  There are gypsies in the neighborhood, and among them is the lovely Zaida, one-time favorite of the might Turkish prince Selim.  Zaida has fled the seraglio in the wake of her jealous companions slandering her with charges of infidelity; she pines for her beloved, but hot-tempered, Selim.  No sooner has Zaida told her tale than who should arrive in Naples but Selim himself? Fiorilla and Selim are promptly and mutually smitten, and plan to run away together.  Don Geronio strains to hold on to his wandering wife; Zaida strives to regain her beloved; Don Narciso is perplexed that Fiorilla, or anyone else, might be interested in anyone but him; Selim is torn in his loyalties.

At least in the Romani-Rossini version, the plot is further compounded by a heaping helping of meta- in the form of the local poet/playwright, Prosdocemo.  Desperately seeking a plot for his next play, he begins by observing and then proceeds to attempting to influence the actions of the other characters, all the while compiling copious notes and complaining when the necessary gestures and unities go unobserved.

Confusion and arias ensue, climaxing in a masked ball in which all of the principals dress as either Selim or Fiorilla, creating further confusion . . . 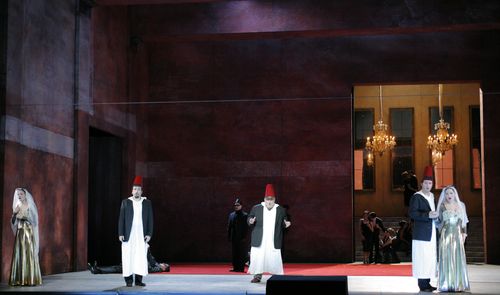 until all eventually ends well with the right couples in the right combinations: Geronio recovers Fiorilla, Selim is reunited with Zaida, and Narciso is left with his own sweet self.  The happy couples settle down for a night of TV. 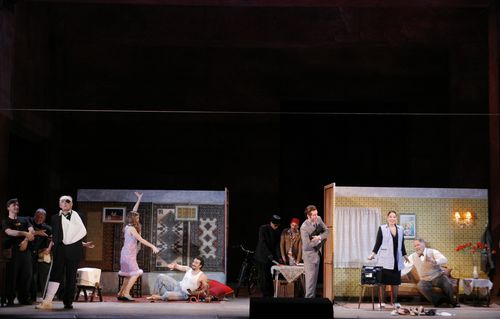 As the televisions in the photos above attest, Los Angeles Opera's production keeps the tale in Italy, but moves it solidly in to the late-mid 20th century.  There's no harm done: these character types are more or less timeless, and foolish people following their hearts and hormones are never out of place or out of date.  Rossini and Romani wrote an Italian sex comedy, and that's what we get, albeit with the odd anachronism of Selim arriving in town via flying carpet.

This production originated at the Hamburg State Opera under the direction of the well-known-in-Europe Christof Loy; direction in Los Angeles passed to Axel Weidauer.  Il Turco is a solidly built comic contraption, and Loy's production exploits the possibilities it offers.  The gypsies' caravan is, for example, a small caravan trailer from which some three dozen colorful vagabonds emerge, clown-car-like, during the overture.  A potentially intimate moment between Selim and Fiorilla is interrupted by a burst of steam from the espresso maker (timed to a reference to coffee in the libretto, so it's a legitimate directorial choice).  The male chorus, whether playing at stagehands or in eveing wear, swoons over Fiorilla at the slightest provocation.  Narciso first appears in leather and pomade, like some Neapolitan James Dean.  The unfortunate Poet gains his plot, but only at the cost of an escalating series of injuries.

The Los Angeles cast is uniformly fine, mixing sterling musical skills with a knowing flair for comedy.  Nino Machaidze smolders, pouts and poses as Fiorilla, lofting some impressive high D's in her cadenza's.  Kate LIndsey's Zaida has less to do, but must be the most appealingly wholesome seraglio alum ever.  Paolo Gavanelli sputters mightily as the long-suffering cuckold Geronio, and handles the extravagantly elaborate staccato patter singing that the part requires with effortless facility.  Maxim Mironov is hunkily stupid as the hunkily stupid Narciso, and provides full tenor value for them as likes that sort of thing.  Not least among the principals is the veteran Sir Thomas Allen as the hapless Poet, resenbling a cross between Dino de Laurentis and Umberto Eco, bearing his wounds with pride as he blesses Apollo and the muses.

There is no real substance to chew over in Il Turco, or to distract from simply enjoying the foolishness and top-drawer vocalism. Earlier enthusiastic notices were spot on and should be heeded. Two performances remain: Thursday, March 10 and Sunday, March 13.  Go and see it, presto.

P.S., While Los Angeles Opera has been touting itself as the first "major" company to produce Il Turco in this country in over thirty years, some of us know that the intrepid Long Beach Opera staged it in 1995.  This photo comes from that production, directed by Christopher Alden.  As can be seen, Christof Loy is not the first to think of bringing a Felliniesque updating to the piece. 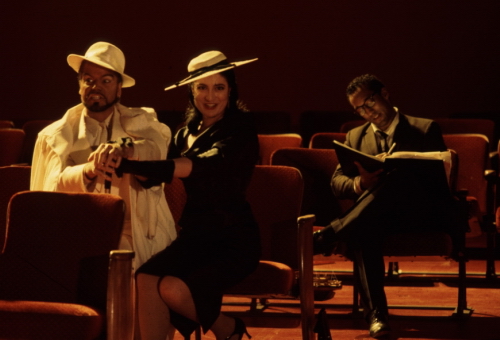