Miles Must Go Before We Sleep
[Benjamin Britten, The Turn of the Screw,
Los Angeles Opera] 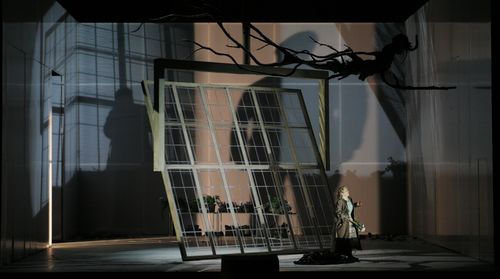 Henry James liked ghost stories.  I would venture to guess that if you catalogued them you would find more ghosts, as such, in James's stories

than you would in Poe's.  The typical James ghost story is tricky: it tends to be ticking along as though it is an entirely typical James story, all social observation and subtle class distinction, until the reader suddenly realizes with a jolt that we have all somehow slipped unbeknownst in to the uncanny.

In his most famous ghost story—his most famous story, period, I suppose—"The Turn of the Screw," James actually throws his change-up.  "The Turn of the Screw" tells us that it is a ghost story, practically from its first page—it is presented as a reading, during a country house weekend in which the guests are trying to "top" one another's ghostly tales, of a true account of strange events that occurred a number of years before—but it proves to be instead an exercise in ambiguity and unreliable narration, a "James story" masquerading as a ghost story not vice versa.  Are the supposed ghosts "real" in any sense?  Are they purely imaginary manifestations of the nameless memoirist's neuroses or (for the diagnosticians of the day) hysteria?  Who, exactly, is young Miles referring to as a "devil" before his little heart stops in the famous final paragraph?  Generations of high school students have scowled in James's general direction as their teachers struggle to interest them in these conundra.

When Benjamin Britten set out to adapt "The Turn of the Screw" as an opera in 1954, he and his librettist, Myfanwy Piper (who suggested it to him), took liberties with James's story, but they are all to the good.  In James the ostensible ghosts of the valet Peter Quint and of the prior governess Miss Jessel are seen (maybe) by the new governess, but they are not seen to act, other than by their apparition, and they do not speak.  Piper's libretto brings the ghosts into the house, and permits them interaction with the children, Miles and Flora, as well as some of the most affecting vocal passages in the work.  Piper and Britten effectively eliminate the ambiguity of whether Quint and Miss Jessel are ghosts—we take it that they are—and shift the attention to the more interesting problem of why their ghosts remain and what it means for them to be ghosts and for the children to be connected to them. 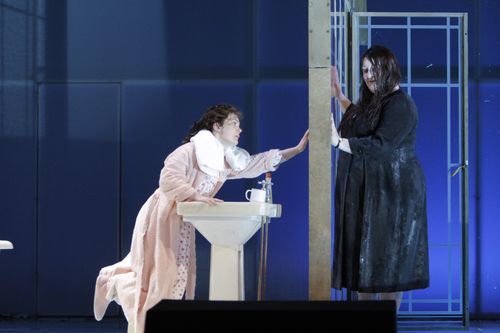 Los Angeles Opera is concluding its 2010-2011 season with a five-performance run of The Turn of the Screw in a production imported from the Glyndebourne Festival.  There are two remaining performances, March 27 (Sunday) and March 30 (Wednesday), and I somewhat regret to say that tickets are unquestionably available.  The house on Saturday night was two-thirds full at best, comparable to later performances of the very-troubled Lohengrin earlier in the season.  There appeared to be no post-intermission attrition, which is only right given that this production is a full-on success in all the ways the Lohengrin was not.

The original version of this production premiered at Glyndebourne in 2006, and was devised and directed by Jonathan Kent. (Francesca Gilpin directs in Los Angeles.)  The action has been shifted from the late 19th century to the middle 20th, two eras that differ little from one another when it comes to the opera's core concern with Britten's recurrent theme: the outsider.  From the standpoint of pure mechanics, the set design in this production is as remarkable as anything in Achim Freyer's much more elaborate Ring cycle.  All of the action is enclosed in a large "white box" space, but within that space people, objects and set pieces are constantly on the move, seamlessly shifting in and out of scenes on concentric turntables.  From above barren tree limbs (tree roots?) ascend and descend, and the entire scene is dominated by an enormous flipping and rotating wall of windows.  (There is a good deal of looking out of windows, or seeing unwelcome presences looking in, in James's story.)  By shifting the angles and inclinations of the window wall, it can serve for the main front of the country house at Bly, as a greenhouse, as a slanted attic ceiling, and even, lying nearly flat on the stage floor, as the lake from which Miss Jessel first manifests herself.  The set, and the play of light and shadow upon it, is almost worth the price of admission in itself.

But there is much more going on here than wildly impressive stage machinery.  LA Opera's Turn of the Screw is the rare production in which the meshing of every element with every other is as seamless as possible, with the result coming as near perfection as it is likely possible for a Turn of the Screw to get. Benjamin Britten scored the opera for a compact 13-piece chamber orchestra.  It begins, in fact, not with an orchestral prelude but with a Prologue accompanied by piano and sporadic, tentative percussion.  The orchestra arrives full bore as the nameless Governess travels by train to meet her new charges, and then wraps the proceedings in a constantly changing selection of ensemble and solo parts.  The ease with which Britten seems able to complement or comment upon every line, phrase and development in the text is remarkable, especially in those passages throughout the opera in which only a handful of instruments are actually playing.  A well-placed solo clarinet or oboe is as scary as any thudding crescendo.

James Conlon is apparently as partial to Britten as he is to Wagner, and is actively pursuing a series of Britten stagings in conjunction with the composer's upcoming centenary.  Conlon's conducting approach suits this score exceptionally well, and the playing under his direction is translucent and filled with purpose: each part can be heard plainly, on its own and in connection with each other part, running like a perfectly crafted timepiece.  Perhaps most impressive: without any forcing or overplaying, none of this was lost in the cavernous expanse of Dorothy Chandler Pavilion, which has been known to muffle or swallow much larger forces.  (I was toward the rear of the orchestra section, and the sound arrived in fresh and toasty condition.)

The singing cast of six is strong across the board.  Patricia Racette is the Governess, standing firm or unraveling in the face of unseen forces from moment to moment without ever slipping into shrillness.  Ann Murray, as the housekeeper Mrs. Grose, is the only character who never goes quite round the bend, and provides a welcome anchor of (perhaps naive and uninformed) calm. Michael Kepler Meo, age 12, plays young Miles (a role he has played previously with other companies) and is a most impressive young artist.  His singing voice never misses, and his acting is poised and pointed, particularly in the disquieting interactions with his governess in which Miles is troublingly 'adult'.

Because this is a Britten opera, it follows as the night the day that there must have been a part for the composer's companion and inspiration, the tenor Peter Pears.  That role is the deceased Peter Quint, and Quint's music is the most overtly otherworldly in the piece.  In James's story, we only know Quint from the unreliable and highly judgmental account of Mrs. Grose, and he is presumed to be a bit of a rotter and overreacher, looking to rise above his station much like Mellors the gamekeeper in Lady Chatterley's Love.  In Myfanwy Piper's text—this, by the way, is another of those operas I could cite for my oft-repeated rule that one should never underestimate the importance of a good libretto—Quint is given the opportunity to declare himself as the voice of the sinister charms of freedom and wild nature, dangerous certainly but not innately "evil."  Why, he even quotes Yeats!  ("The ceremony of innocence is drowned.") Quint wishes to influence Miles so that he might gain a friend and sympathizer, not for any pleasure in his destruction.  (Miss Jessel, on the other hand, is more simply out for revenge, not the least of it directed toward her presumed seducer Quint.)  The role of Quint falls here to Willam Burden, who sings with all necessary eeriness and brings a movingly wounded dignity to the part.  In the closing scene the central tragedy lies in the death of young Miles, but there's a hint of lingering sadness over the "defeat" of Quint as well, another rejection of the perpetual outsider.

Obviously, this is no happy go lucky lark of an evening.  It is music drama of a very high order, and absolutely worth seeing and hearing.  Los Angeles Opera has had a strong season and I would select The Turn of the Screw as the very strongest thing in it.

This is the second time Los Angeles Opera has presented The Turn of the Screw, which aws last seen here around 1991 in a production directed by Jonathan Miller.  That version was impressive, to be sure, but in retrospect it seems unnecessarily heavy-handed, layering melodrama on material that works perfectly well without it.  Hearing Britten's score again for the first time in 20 years, particularly with the clarity brought to it by Conolon, I was impressed by how much of Britten's good influence has been absorbed by a number of the current composers I most support.  Nico Muhly, for example, makes no secret that Britten is one of his (seemingly innumerable) influences; I suspect Judd Greenstein of carrying some Britten in his musical toolkit as well. It leaves me wondering what Britten himself might have done—something unexpected and really interesting, I have no doubt—had he been able to access the occasional synthesizer or electric guitar.