This is the cover of a forthcoming CD.

["Was" the cover, actually: see the update below.] 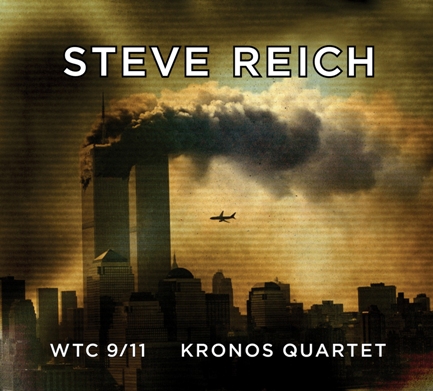 Specifically, this is the cover for the recording of WTC 9/11, by composer Steve Reich, forthcoming from Nonesuch Records on September 6, 2011, five days prior to the tenth anniversary of the terrorist attacks of September 11, 2011.

When this image first appeared yesterday via a post by Christian Carey on Sequenza 21/, I anticipated that it might not set well in some quarters, and I posted a few admittedly glib remarks about it on Google+. This post is meant as an expansion and as a more unhurried reflection on those earlier remarks.

WTC 9/11 is Steve Reich's musical response to the events of September 11, 2001, in New York City. It is about 15 minutes long, and Nonesuch gives this description of its method:

The piece is scored for three string quartets; Kronos [Quartet] recorded all three parts for the album. WTC 9/11 also uses pre-recorded voices, the speakers’ final vowels and consonants elongated in a stop-motion sound technique that Reich says is the 'means of connecting one person to another—harmonically.' Those voices and their texts belong to NORAD air traffic controllers, as they raised the alert that the airplanes were off course; FDNY workers on the scene; friends and former neighbors of the Reichs, recalling that day; and women who kept vigil, or Shmira, over the dead in a tent outside the Medical Examiner's office, reading Psalms or Biblical passages.

The piece has been touring in live performance by the Kronos Quartet since its world premiere at Duke University in March of this year. A review of the west coast premiere in San Francisco is here. The Village Voice review of the New York premiere is here. The first two minutes of the piece can be heard here.

Beyond those two minutes, I have not heard WTC 9/11, so the work itself is not before us. This post is only concerned with what the recording of the work will look like.

It is no surprise that this cover design has upset, and has drawn objection from, many who have seen it, including particularly many who move in the same musical and artistic circles in New York as Steve Reich himself. A simple statement of those objections came from Steve Smith, music editor of Time Out New York:

And publicist Amanda Ameer was similarly so:

These objections have been raised in the highest good faith, by people who (I believe) were there in a way that I, for one, was not. I was here in California, thousands of miles distant. As with everyone else on earth not in lower Manhattan and the surrounding buroughs that morning—or not in Washington/ Alexandria or near the crash site in Pennsylvania—my experience of the thing is beyond secondhand, largely mediated by the television screen. Even Steve Reich, whose apartment was only four blocks from the World Trade Center, was out of town in Vermont that day, although others in his immediate family were there on the spot.

Taking the objectors' good faith as a given, I would defend Nonesuch and anyone else—Reich? Kronos Quartet? If I was a journalist, instead of just some fellow with a blog, I might inquire further—who had a hand in or gave consent to the selection of this cover image. The choice is not only defensible, it is appropriate and perhaps even necessary as we approach the tenth anniversary of the events to which that image bears witness.

One of the details that made September 11, 2001, so awful was that it was a truly beautiful autumn morning in New York City, clear and blue and crystaline. The original image that is the basis for the Nonesuch cover reflects that, and the manipulation of that image for the CD cover unfortunately recalls instances such as TIME magazine's infamously darkened version of OJ Simpson's booking photo. Here, though, the manipulation is more easily justified: despite our all knowing what a glorious morning it was before the first plane struck the first tower, the feeling of September 11, 2001, in retrospect and in collective memory is dark, smoke-filled, clouded with the horrible dust of collapse. That sense of the day is reflected in the dismal palette of the CD cover, and in the contrasting fragment of blue sky that still peeps through in the vicinity of the composer's surname.

Granted, that sliver of sky is as close as this design gets to subtlety, and it cannot really be argued—at least it won't be argued by me—that this cover is, as a stand-alone piece, anywhere near "great" art. It is something of a blunt instrument. It is nevertheless legitimate.

This is a strong and confrontational image, but not I think a case of facile or mercenary "controversy for controversy's sake." "This thing happened," it says. "Look at this." And WTC 9/11 adds: "This thing happened. Listen to this." I can speculate that many of those who are troubled or offended by this CD cover have defended, or have made, art that is as confrontational and discomforting of others' sensitivities on other subjects as this is to their own sensitivities on this one. It is the nature of sensitivities to be offended in this world, frequently or even particularly by art, and the sensitivities in play here are neither more nor less entitled to be protected from offense than any others.

As I suggested in my original comment, one of the reasons this cover comes as something of a shock is that we have established a habit in this country over the past ten years of not looking directly toward September 11, 2001, of wrapping those events in a gauze of piety or "Don't Tread on Me" American exceptionalism (or worse, both)—what Christian Carey, speaking more about Reich's piece than about the cover, referred to as "languid sentimentality and unfortunate jingoism"—or of simply looking away, couching denial as a form of respect.

Whether we were personally present or not, we are all of us a decade past that day. The facing of this world's most unpleasant aspects is a part of what art is all about, and reflection upon them is part of the point of Steve Reich's piece. The cover image is not a cheapening or commoditization of the event it portrays. It is a palimpsest, a writing-over of an underlying image by way of commentary, focus, heightening of the already potent sting of the thing itself. September 11, 2001, happened, in lower Manhattan and elsewhere, and it was terrible as terrible can be. But it does not and should not follow that the only way in which we grapple with it is to declare that images of that day are beyond the pale.

Update [081111]:  Steve Reich, who acknowledges ownership of the decision on the original WTC 9/11 cover, has chosen to withdraw and change it. In a statement issued through Nonesuch today, the composer writes:

When the cover was being designed, I believed, as did all the staff at Nonesuch and the art director, that a piece of music with documentary material from an event would best be matched with a documentary photograph of that event. I felt that the photo suggested by our art director was very powerful, and Nonesuch backed me up. All of us felt that anyone seeing the cover would feel the same way.

When the cover was released on the Nonesuch site and elsewhere, there was, instead, an outpouring of controversy mostly by people who had never heard the music.

When WTC 9/11 was performed by the Kronos Quartet, first in Durham, North Carolina, at Duke University and then shortly afterwards outside of Los Angeles and then at Carnegie Hall and again at the Barbican Centre in London, the reaction of the public and press was extremely thoughtful and moving. To have this reaction to the music usurped by the album cover seemed completely wrong. Accordingly, the cover is being changed.

The statement comes dangerously close to being a "non-apology apology" or even a case of "blame the victim," and it has been taken as such in some quarters. It is not really an apology or argument, as such, at all. I take it as simply a statement that a choice has been made and a summary, compelling or not, of the thought behind hat choice.

I, obviously, was something of a defender of the original cover in the first version of this post, but I allowed as how those who were most opposed to that cover were offended in truth and in good faith, not donning the mere guise of offense for ulterior motives. The authenticity and the understandable nature of the negative reaction is such that it is difficult to believe that anyone could have been surprised by it. There were good reasons to select that cover image, but the notion that no one would notice or care would not be among them.

I still believe the original cover was and is defensible. I also believe that it is a decent thing—neither courageous nor cowardly, just decent and reasonable—to withdraw it.  Art sometimes has the element of a game, but it is never a zero sum game. No one has "won" or "lost" in these decisions.

No new design has been released at this writing. The Reich statement does not suggest that the September 6 release date will be changed, so we can expect to see the revised version soon enough.

Posted at 10:23 AM in Arts and Culture At Large, Current Affairs, Music | Permalink | Comments (2)

Blog Me, Daddy, Eight to the Bar!

This little blog launched eight years ago today, on July 2, 2003. The posts are less frequently now than they once were, and less glib, but The Blogging still carries enough satisfaction with it that this Fool is likely to keep wandering these woods for some time to come. 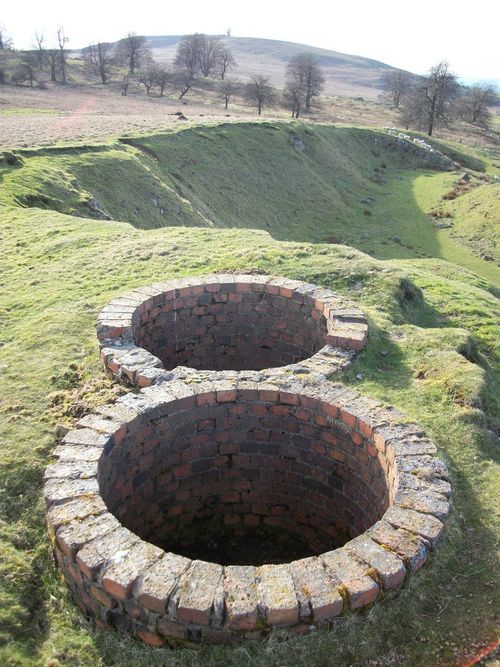 For last year's seventh anniversary, I linked back to seven posts from the past seven years.  This time, a selection of eight posts from the preceding twelvemonth that do not, I think, embarrass their author too much.

Although it is not really reflected in that selection, this blog has been skewing increasingly toward the subject of music.  Something like 80% of posts so far in 2011 have fallen into that category, and I predict that the trend will continue for the next little while at least, as I have a sizable backlog of musical subjects that I want to write about but that haven't yet escaped to the screen.  As with so many other good things, music is more easily consumed than written about.

So, off we go into the unknowns of a ninth year of blogging.  And to see this point our in a musical vein: Czech, please!