Bold as Brass:
Some songs featuring, or with critically good bits for, the Horn Section
[Cross-post from Spotify Classical Playlists blog] 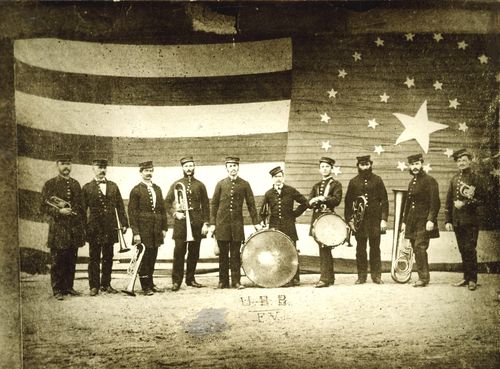 [The post below is a repost/cross-post of a guest post I was invited to write for the unofficial Spotify Classical Playlists blog. The playlist in question is decidedly not classical, so it was a pleasant surprise to be asked over to that particular venue. For those interested, the US version of the Spotify streaming music service can be accessed here.]

Much of the fun of creating Spotify playlists lies in the innumerable ways in which lists can be themed. Some Spotificists choose the straightforward “jam” mix: songs they like, songs they happen to be listening to Right Now, songs for partying, songs for canoodling, and on and on. Others opt for the archival approach, collecting complete sets of things or definitive surveys [“Jos. von Rottweiler - The Complete Bassoon Pavanes, 1610-1623”]. My preferred method is thematic free association.

Bold as Brass: Some songs featuring, or with critically good bits for, the Horn Section [40 tracks, 2 hours]

This list is essentially what its title says it is: a group of songs linked only by the fact that there are horn parts in [most of] them. All the songs are songs that I happen to like, usually because of the way the horn part works.

Two recent releases were catalysts (cata-lists?) for this selection, each bringing a marching-band sensibility to bear on non-obvious material. Both of them appear in the collection: the Hackney Colliery Band, represented by its take on Blackstreet’s “No Diggity.” The other inspiration is Asphalt Orchestra, the avant-marching band project under the umbrella of NYC’s Bang on a Can, whose take on Frank Zappa’s “Zomby Woof” (it appears here as "Zomby Wolf") is a hoot and delight.

Thinking about marching-band influenced tracks rapidly expanded to include horn/brass parts generally, leading to the list as it is now.

Beyond the presence of horn parts, other rules are in play, of course. Most of them have been broken as often as they are followed. For example, I have tried to avoid obvious choices in favor of the less well known. There is nothing here from the Rolling Stones (though I have included a song from a Keith Richards solo outing) and none of the many possible choices from the Beatles. That the Beatles are not on Spotify only simplified a choice I would have made anyway. I have tried to avoid the well-known generally, so I feel a bit guilty over the inclusion of “Tusk” and The Who – but I’m too fond of the songs to omit them.

Theoretically, I adopted a one-song-only-per-artist rule, but that has been broken, too. The ostensible Elvis Costello number, “Stalin Malone,” has lyrics and presumably was recorded with vocals, but the album version is strictly an instrumental performed by the Dirty Dozen Brass Band. The Dirty Dozen reappears in its own name with “Feet Don’t Fail Me now.” EC himself reappears, singing this time, in a selection from his collaboration with New Orleans legend Allen Toussaint. (New Orleans is fully represented, by the Dozen and Toussaint and by the unexpected “second line” that burst out in Elvis Perkins’ “Give My Fond Regards to Lonelyville.”) In another violation of the one-song rule, I’ve started things off with Eric Mathews, under his own name, with his wonderful “Fanfare,” and he reappears as the horn-playing half of Seinking Ships on “One Day Forever.”

While the hors are prominent and obvious in many of these selections, they sometimes take their sweet time joining the party. Midnight Oil’s “Power and the Passion” doesn’t set the brass loose until it’s final minute, but that minute makes the song. “Christi,” by semi-obscure Chicago psych-folk group The Singleman Affair, has a wonderfully woozy horn part in this live version, but nowhere else: the studio version released earlier this year is good, but missing the little bit of wacky joy that the trumpet brought to it live.

Perhaps the biggest breach of the rules is in the title of the Playlist itself. The song “Bold as Brass” comes from a very early (1977) Split Enz album, when it was still Phil Judd and Tim Finn’s band, before Neil Finn came on board. It is a song I have liked since its original release . . . and despite its title, has no brass part. But this is my playlist, by gumbo, so I can say with Walt Whitman: “Do I contradict myself? Very well, I contradict myself!”

I hope that this music brings you the pleasures it brings me. If so, trumpet it to all and sundry.