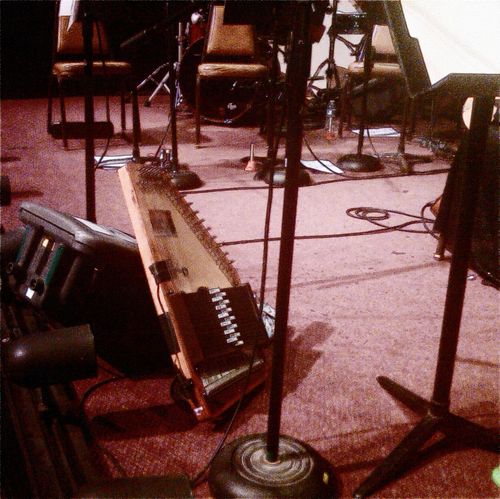 After singing Sarah Kirkland Snider's Penelope earlier in the evening, Shara Worden returned to the Carlsbad Musical Festival stage to close out Day 1 of the Carlsbad Music Festival in her guise as My Brightest Diamond.* In a festival actively interested in the interstices where socalledclassical and socalledpopular musics overlap, this was the program that leaned furthest toward the latter realm and the audience reflected it, with a goodly proportion of younger MBD fans joining the older-skewing core Festival goers.

in 2006, the standard take on Shara Worden was that she was a "classically-trained" singer who combined the theatricality of Kate Bush with the urgency and underlying darkness of PJ Harvey. Not bad, as overgeneralizations go. The assessment needed revision soon after when Worden released A Thousand Shark's Teeth

. Although it came to market after Workhorse, the songs on Shark's Teeth were largely recorded in the same sessions. The later-released songs, while they still found the occasional use for heavy electric guitar, evidenced a more complex aesthetic and larger ambitions. One song in particular, "Apples," is a little gem of Joycean epiphany that continues haunt me as the catalyst for a "blog post I've been meaning to write for years but have never gotten a handle on" on the subject of ostensibly "pop" music that aspires to, and shares the concerns of, art song. [Also, Shara Worden's delivery of the phrase "and we ate them" in that song makes me smile every time.]

Saturday night's set was devoted to the songs from Ms. Worden/MBD's forthcoming All Things Will Unwind

, which was recorded with the contemporary chamber ensemble yMusic—which itself has a terrific collection of new instrumental music, Beautiful Mechanical

, releasing this week. Bowed strings and woodwind instruments are privileged on these songs over guitar, and the seeds of exploration of form and theme begun in earnest on Shark's Teeth seem to have come to full flower in this collection.

yMusic was not present on Saturday. The performance was supported by a group that overlapped to a large extent with the earlier Penelope ensemble. The Calder Quartet swapped out a violinist and a cellist from the group in favor of their other violinist and violist. Drummer-percussionist Ted Poore provided a rich, supple rhythmic foundation in both ensembles.

Shara Worden is a live performer of tremendous gifts: she has the fearsome intelligence and theatricality of, say, Peter Gabriel, somehow combined with the air of the most charming and welcoming of hosts, topped by a sparking enthusiasm reminiscent of the best second grade teacher you ever imagined. Early highlights among the new songs included "We Added It Up"—which comes complete with a timely reference to neutrinos in the chorus—and the haunting "Reaching Through to the Other Side" (embedded below).

I expect to return to these songs in more detail once I've had a chance to listen to the new album next month, but I can say now that if singable social-consciousness still had a place on the radio, we could look forward to hearing "High Low Middle" for years to come. Starting from the observation that "when you're privileged you don't even know your privileged; when you're not, you know," it manages to channel the spirits of Woody Guthrie and Cab Calloway in the same song, which is no small feat.

Returning for an encore accompanied by Ted Poore at the drum set, Worden grabbed a Stratocaster (without a strap) for "Golden Star" and "Inside a Boy," letting loose a torrent of crunch and distortion, often while adopting the one-legged stork posture once favored by Jethro Tull's Ian Anderson. (Worden needed the raised knee to keep her Strat from falling to the ground.) It left the audience, as they say, wanting more, and was a ringingly affirmative ending to a distinctive and variegated day of top-drawer music.

Reaching Through to the Other Side by My Brightest Diamond

* My Brightest Diamond is to Shara Worden as King Crimson is to Robert Fripp: a "band" name in which the core writer/performer is the only constant over time.

Photo-illustration by the blogger. More professional documentation of this Festival day can be found in this Facebook gallery.

Well, I love your digression, first of all. Now, beyond that, that voice, that voice, that voice! Now, when you catch your breath from all this, I do hope you will write that post about "Apple," which I've now had to add to my ever-growing wish list. Your description of Worden live is perfect, perfect--loved this line particularly and know just what you mean (though my second grade teacher was a mean old crow) "topped by a sparking enthusiasm reminiscent of the best second grade teacher you ever imagined."