The Brash Chords of Redhage
[Jody Redhage: of minutiae and memory] 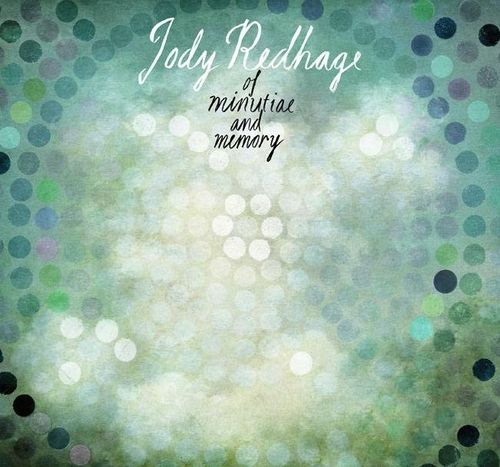 The history of recorded music is spotted with record labels that, however briefly, achieve a level of reliability such that the listener can safely purchase nearly anything the label releases and be confident that All Manner of Thing Shall Be Well [if what that label Does is what you Want to Hear]. Motown achieved this blessed state for a time in the mid-60s, as did Stax/Volt; the early hungry days of David Geffen's Asylum label would qualify. There are doubtless many who could make a pitch for certain periods at Verve or Blue Note or others as achieving that sort of peak in jazz. None can say how long it will last, but New Amsterdam Records seems to be in the thick of one of those fortune-favored eras. The label's 2010 releases dominated my personal year-end assessment, and its 2011 roster is bidding fair to do the same. I have fallen far behind in writing these up, but there's no time like the present to start remediatin' the backlog.

Jody Redhage has the distinction of having been the very first artist released under the New Amsterdam imprint, in 2007. Her second New Amsterdam release, of minutiae and memory, is recently out, and it does nothing to detract from the remarkable roll of fine, fine music that New Amsterdam has been unfurling.

Jody Redhage is a double threat: a cellist who sings. (She can legitimately claim to be a triple threat, adding "composer" to her credits, but she has not included any of her own compositions on this newest release.) Her playing and singing is tricked out, in many cases, with digital and electronic accompaniment or treatments. The end result is generally mesmerizing, immersive and nutritious.

Although each of its eight pieces by eight different composers can stand alone, of minutiae and memory works best as a whole. The album sequencing is practically perfect: two tracks' worth of warming up and throat clearing followed by six more pieces, each with its particular facet of excellence.

Joshua Penman's "I Dreamed I Was Floating" serves as the entryway to the collection, clear lines in the cello in an echoing space centering the listener and allowing the player to limber up a bit. The transition to Anna Clyne's "Paint Box" is abrupt, marked by a loud, close-mic'd intake of breath. "Paint Box" depends more than most of the other pieces here on electronic fiddling-about, with Redhage's speaking voice chopped and spliced whilst it chats about colors and repeats, inexplicably, the word "clockwise." To my ears the piece, better in theory than in the actual listening, is the least satisfying in the collection.

All is immediately forgiven, however, with Paula Matthusen's "of memory and minutiae," a thing of wonder and astringent beauty. Beginning with Redhage singing an unaccompanied Swedish prayer text, the cello and ambient electronic enhancements move in to create an enveloping meditative atmosphere redolent of piercing cold, stillness, stone, and crystalline stars. One holds one's breath as in the presence of old souls, not wanting to disturb, hoping the moment can extend and extend and extend. Redhage moves on from strength to strength with Wil Smith's "Static Line," a highly effective drone-piece. Long and, yes, static lines on the cello layer over one another, with the action occurring in the phasing of tones and overtones in the interstices more so than in the lines themselves. At unexpected moments, startling patterns emerge and fade. The piece is like a haunted Rubik's cube in aspic, working itself as if without human aid.

And then: Missy Mazzoli. Mazzoli is the most established "name" among the young composers represented here and her "A Thousand Tongues" does not disappoint. It is recognizably a Mazzoli piece, with the bed spring keyboard parts and the sense of simultaneous urgency and concentration that are among her signatures. When Jody Redhage begins to sing midway through, everything roots down and presses on to whatever lies ahead.

The traditional yearning voice of the cello returns to center stage in Ryan Brown's "The Light By Which She Ascended," which surrounds extended keening lines with ambient street noise, reminiscent of (and, it must be said, superior to) the best of Max Richter. Stefan Weisman's "Everywhere Feathers" shifts attention back to Jody Redhage as singer: a contemplation of life and the life to come sung over a rising, rotating Bach-evoking chordal progression. Finally, the collection settles in toward silence by way of Derek Muro's "Did You See Me Walking?", in which cello and voice work largely in unison, musing on a solitary walk through small-town mist, into which they eventually disappear. The arc is complete, and this listener at least is well satisfied.

Listen here, then do what is right and buy this collection from your preferred supplier of Good Music.

If I had but a tenth of your chops on writing about music, I would be happy indeed. That said, I'm pretty happy just reading what you write. NAR does indeed seem to be on a continuing roll, and I'm certainly glad to be reminded again about this album, which you'd noted before and which I'd flagged for a listen. Though I see a lot of good listening is in store, I was particularly intrigued by the inclusion of Matthusen. I learned of her about a year ago when she had a composition up for Orpheus's Project 440 that I liked very much, then somehow lost sight of her. (Love this line: "The piece is like a haunted Rubik's cube in aspic, working itself as if without human aid.") Listening to her now, after which I will indeed "do the right thing" and snap this album up.