There is Nothing Like a Dame
[Così fan tutte, Los Angeles Opera] 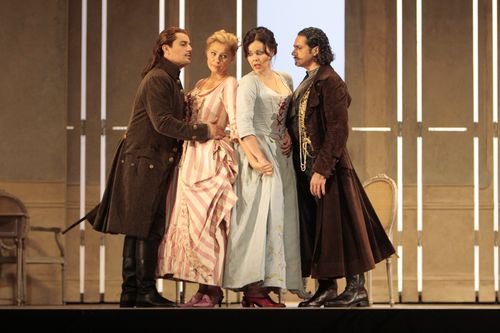 Listen: do you want to know secret about Los Angeles Opera? I won't even make you promise not to tell. Shhh.... Ready?

When LA Opera Music Director James Conlon is conducting, it is at least an even money bet that he will receive the loudest applause at the end of the evening.

Now, I happen to believe there is nothing wrong with that arrangement. Conlon is deeply knowledgeable in the repertoire, technically gifted, and an unstoppable enthusiast for the works he presents. He is, as I have probably written before, the best Talker About Music that I have heard since the golden age of Leonard Bernstein. His pre-performance talks draw full houses in their own right. Los Angeles is fortunate to have him (at least until 2013).

That Conlon should draw the loudest curtain call response for this season's Eugene Onegin is perhaps unsurprising: there are some fine performances on stage in that production, particularly among the women, but the the work of Conlon and the orchestra is what ultimately carries the night. What is more surprising is that Conlon should still win out, if only by a hair, in the applause sweepstakes when it comes to the company's concurrent production of Mozart's Così fan tutte, in which all six of the principal singers shine with exceeding brightness. 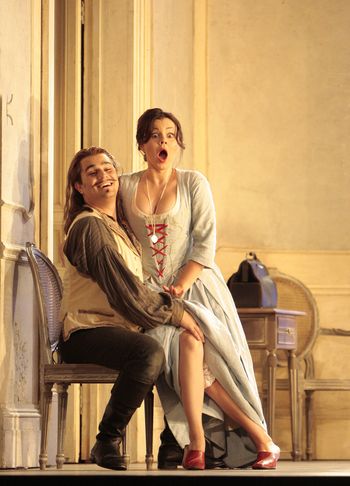 To review, Così fan tutte is the last of the three operas Mozart devised in collaboration with librettist Lorenzo da Ponte. It is often said that because the women in their first two projects (Marriage of Figaro and Don Giovanni) had been portrayed in such a favorable light, the poet and the composer felt the need to redress the balance of the sexes by telling a tale of female duplicity. I don't believe their hearts were really in it in that respect.

I cannot speak to da Ponte's relations with women, but Mozart was certainly no misogynist. Two of the relationships most central to his life, and most cherished by him, were with his sister and his wife. While no more of a feminist than his era allowed, Mozart seems to have had no difficulty accepting women as something more than a lesser form of life.

The dashing Neapolitan heroes of the tale, Ferrando and Guglielmo, are the fastest of friends and have become engaged to two beautiful sisters, Dorabella and Fiordiligi. As we join them, the friends are praising their beloveds to their older companion, Don Alfonso. Alfonso assures them that all women, even these the friends so prize, will prove unfaithful given the opportunity. He proposes a wager: if they will follow his every instruction, he will prove that his faith in women's infidelity is well founded. The friends agree, and Alfonso promptly arranges that they will appear to be conscripted and sent off to to the front. The lovers part tearfully, the men march martially away, and in no time Don Alfonso is introducing the sisters to two Albanian gentlemen of his acquaintance. The "Albanians" are, of course, Ferrando and Guglielmo, now disguised (in this production) as Orlando Bloom and Inigo Montoya, respectively. Each sets to wooing the other's fiancee, at first with no success. Rebuffed, the men demonstrate the sincerity of their petition by "taking poison," nearly dieing before the eyes of the horrified sisters before they are miraculously saved by a passing practitioner of magnetic healing (the sisters' servant Despina, also in disguise). Their hearts softened by the Fauxbanians' suicidal ardor—and persuaded by Despina that they are unlikely to be found out—each sister eventually succumbs and agrees to marry the other's beau. The men are most unhappy with the lesson that the wily Don Alfonso has taught them: that indeed "così fan tutte", "all women are alike". As the new marital arrangements are about to be formalized, the friends reappear as themselves, confront the women and . . . all ends in tentative reconciliation in the light of Don Alfonso's second lesson: that we should all be guided by Reason because, lord! what fools all we mortals be, man and woman alike. 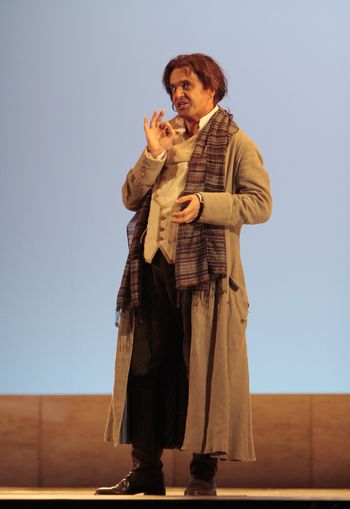 This production is an import from Glyndeborne, where it was originally devised and directed by Nicholas Hytner. It is pleasant to look at and provides a comfortable setting for the work of six seriously fine singing actors making the most of what Mozart and da Ponte have given them, singly and in combination.

First among near equals are Aleksandra Kurzak and Ildebrando D'Arcangelo as Fiordiligi and Guglielmo. As the more level-headed and sophisticated of the sisters, Kurzak is the most reluctant to give in to temptation and gets the best arias in the piece, which she sings with gorgeous range and sensitivity. She also shows a gift for the "grace under pressure" style of comedy, with a few big-eyed Lucille Ball faces for good measure. D'Arcangelo's baritone is a burnished and resonant thing, which he places exactly where he wants it to go. For those to whom such things are important, he is quite the smolderingly handsome fellow. He, too, has a talent for comedy, of a more earthy and physical turn. It is reported that he will be back to Los Angeles next year to portray Don Giovanni, and his performance here makes that a production to begin anticipating now.

Ruxandra Donose was last seen here, frequently in lingerie, as the female lead in the horror show that was The Fly. It was not her fault, and she managed to maintain her dignity under extremely trying circumstances. As Dorabella, the marginally more flighty and slightly more open to possibilities than Fiordiligi, she charms completely. The two sisters frequently sing at the same time and in those passages the combination of Kurzak's and Donose's voices is a luxuriant pleasure. Saimir Pirgu, an actual Albanian playing a pretend-Albanian, brings matinee idol style, a winning grin and a clear and shiny tenor voice to the role of Ferrando. Roxana Constantinescu is appropriately sharp-eyed and bawdy as Despina, especially when advising her mistresses to do as they will, since what the men don't know won't hurt them.

Don Alfonso is in some ways a more grounded and responsible Pangloss, out to teach his young friends the ways of the world and the errors in their assumptions about it. Lorenzo Regazzo gives us a younger than usual Alfonso, his devotion to reason derived from experience rather than years. He combines a lounge lizard's insouciance with some of the out of plumb, possibly inebriate aura of Christopher Lloyd, even occasionally breaking the fourth wall for the audience's benefit. He is our generous host, the off-center center of the piece, and he brings an embracing humanistic warmth to his final lessons for the younger lovers. 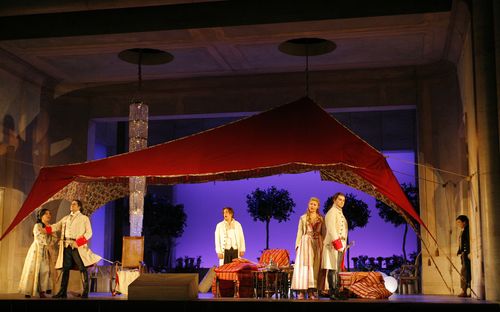 Così fan tutte is a comedy, an opera buffa, and it bears emphasizing that this production is just plain funny. The jokes work, and for the most part they have not been imposed by the production team, but grow organically from the loam of character and situation. This Così is smart, funny and beautiful. Would that they could all be like that.

Enjoyed your review & was of course amused by this aside: Ruxandra Donose was last seen here, frequently in lingerie, as the female lead in the horror show that was The Fly. It was not her fault, and she managed to maintain her dignity under extremely trying circumstances.