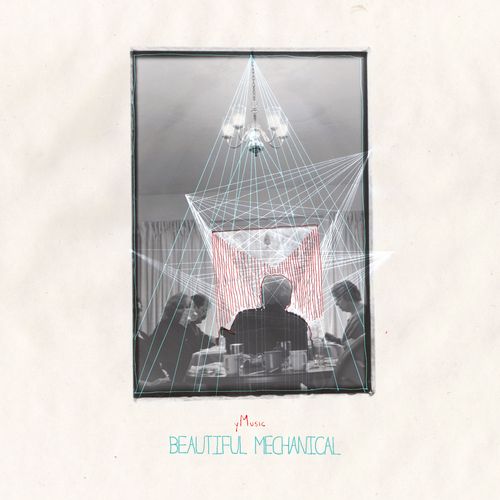 So, here we have Beautiful Mechanical

by yMusic, and Beautiful Mechanical by yMusic is that Great Good Thing, a collection of music in which each individual piece stands niftily on its own and in which the selection and sequencing of the pieces in relation to one another provides that extra smackerel of satisfaction that is the mark of a Really Fine Record Album.

yMusic is a six-member ensemble cofounded by Rob Moose (violin/guitar) and C J Camerieri (trumpet/french horn) and includes four other hard-working New York musicians: Alex Sopp (flute/piccolo), Nadia Sirota (viola), Clarice Jensen (cello), and Hideaki Aomori (clarinets of all descriptions). All of the members are active in both the alt-classical/indie classical/whatever world [as suggested by this collection being released by New Amsterdam Records] and as collaborators, collectively and individually, in an array of other musical projects. They are at home equally in concert hall, studio, or dive bar, wherever the music may take them. (Daniel Kushner has written a thoroughly informative profile of yMusic's origins and world view, here.)

Beautiful Mechanical collects seven pieces by six composers, all written with the yMusic players in mind. Only two of the composers are best known as capital-C Composers; the other four are more commonly thought of as songwriters and performers. The quality of all seven compositions renders that a distinction without a difference.

yMusic introduces itself with the titular "Beautiful Mechanical." The composer credit goes to Son Lux, the performance/production name favored by Ryan Lott. Most or all of yMusic's members appeared earlier this year on the second Son Lux album, We Are Rising (

which in addition to being very good has the distinction of having been written and recorded in a single month). The more usual Son Lux sound works the darker, sparser, more angst-ridden regions of hip-hop and electronica. "Beautiful Mechanical" takes advantage of the organic warmth provided by non-electronic, non-amplified instruments while still carrying a semi-industrial edge. It is a propulsive, even sprightly piece, a distant contemporary relation of Raymond Scott's "Powerhouse" (fondly remembered as the "assembly line" music in many a Looney Toon). "Beautiful Mechanical" would be the perfect score for an image-building manufacturing documentary, of the kind that might be shown in a 6th grade classroom ca. 1961.

"Proven Badlands" by Annie Clark (aka St. Vincent) follows, and its first 90 seconds or so achieve a sort of eccentric perfection. The woodwinds begin, suggestive of Debussy or Ravel; a moment later, the trumpet takes up the same theme, but now it evokes some craggly bit of the American West—the Great Basin or the Black Hills; an ominous thrum develops in the low strings; the trumpet blasts in with a fanfare befitting a high speed car chase, and we are on our way through a 7-minute kaleidoscope of shifting mood and terrain, with nary a dull moment.

Shara Worden (My Brightest Diamond, whose forthcoming/ anticipated All Things Will Unwind

features yMusic as its core players) is represented by the two shortest pieces, a pair of atmospheric nocturnal miniatures. "A Whistle, a Tune, a Macaroon" seems to pick its way through marshes by moonlight, with plucked strngs and low warbles of the flute. "A Paper, a Pen, a Note to a Friend" is more percussive, if no less mysterious in its intentions, an invitation to ritual movement. In her recent performance at the Carlsbad Music Festival, Shara Worden used yMusic's recording of the piece for her bemasked entrance; yMusic performs it al fresco in the second video, below.

The two Worden pieces serve as parentheses around "Daughter of the Waves," by Sarah Kirkland Snider, regularly mentioned here as the composer of fool-favorite Penelope

. In a recorded interview, the composer has said that this piece was influenced by its being composed during her pregnancy and that the title references both her daughter's name (Dylan, Welsh, 'child of the waves') and the turbulent emotional states of pregnancy. It is open to many interpretations, and could as easily be heard as a [small-i] impressionist seascape/shorescape, Debussy's La Mer or Britten's Sea Interludes retooled for small ensemble, although it is not particularly imitative of either. It is superior mood music for those with ever-changing moods.

, released earlier this year. In some ways, the pieces display a town mouse/country mouse relationship, their respective sound profiles driven by the constituent instruments in the two groups. "Dawn, Clearing, Dance" builds from a series of shifting interlocking pulsating melodies, the players metaphorically leaping and catching like a seasoned trapeze act. It resembles "Change" in the prominence of the woodwinds—Alex Sopp and her flute are central to both pieces—but the presence of the trumpet, the emphasis on the string players, and the absence of piano or (prominent) guitar give "C,D,D" a more pastoral, bumptious feel. (The second half of the first video below is devoted to an excerpt from "C,D,D.")

As a coda, yMusic offers Gabriel Kahane's "Song." Rob Moose is a longtime collaborator with Kahane and the other members of yMusic put in supporting appearances on Kahan's quietly sensational Where are the Arms

, of which I will have more to say in another post. Befitting its title, "Song" seems at first a simple, melodic piece featuring yMusic co-founder Camerieri's yearning trumpet and Moose's quiet guitar. As happens in Kahane's own songs, however, apparent simplicity is deceptive and the melody tends to strike out in unforeseen directions each time the listener thinks to predict where it is going. It is a conclusion both calming and bittersweet.

After living with this music for several weeks, I find that bits and passages from every one of the pieces on Beautiful Mechanical have taken to arising unbidden in my head throughout the day. It is like a fine red wine with a finish that lingers enticingly and ends too soon.

Video: yMusic in performance, with and without Shara Worden.

Bonus: Richard Brautigan reads his poem, "All Watched Over by Machines of Loving Grace" (1967), from which the title of this post is drawn:

I suppose a law practice is more lucrative, but listening to music like this and writing these marvelous reviews has got to be a lot more fun (or am I projecting . . .). Of many great insights, I enjoyed your compare/contrast between Greenstein's piece on this album and his piece Change on Awake. SKS's piece, BTW, I heard performed as part of the Ecstatic Music Festival last year, thought it a beauty then, and was delighted to find it among the pieces here. Last, not least, the group of musicians that make up yMusic are very fine as you note. I'm not conversant with their individual work in equal measure, but I can attest that Sopp and Sirota are outstanding.