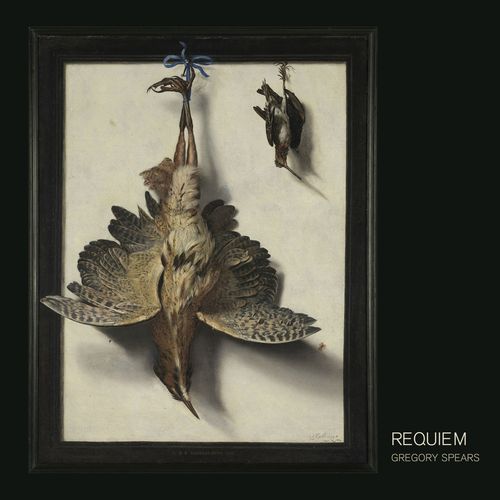 No, no, no. That is a silly conceit. Let it go, and begin again—

Ezra Pound's famous edict to the artists of modernity was "Make It New." His own approach to that edict was to dig in to vastly old work, such as that of the medieval Provençal troveurs, and to bring it to light in a way that might speak to a contemporary head and heart.

, releasing next week on New Amsterdam, Makes It New.

Spears takes old, old elements—stories of bird-girls, the woody sound of the recorder, the sharp ping of the unpedaled Celtic/troubador harp, the Latin Requiem Mass—and by dint of focus and attention, brings them to speak to us and compels us to listen to them. It is a riveting, unexpected and unearthly piece that creeps under the skin and occupies the inner space where mystery dwells. It lingers well beyond its relatively brief 36 minute length. At its end, one is certain of having been somewhere, but the returning traveler would be hard pressed to explain the place to those who haven't gone themselves.

Requiem was not composed for any religious occasion, but to accompany a dance performance: a piece entitled "Hen's Teeth" created by choreographer Christopher Williams and premiered by Dance New Amsterdam in 2010. "Hen's Teeth" in its turn was based in part upon an old Breton tale, "Pipi Menou and the Flying Women."

In the tale, the shepherd Pipi Menou discovers three swans that, when they alight, become beautiful young women. He tricks them, first, into taking him to the stronghold of their father, a magician, then persuades them to smuggle him into the house in a basket, in which he lies hidden during the day. The basket is conveniently located next to the room of the youngest and most appealing daughter, whose favors Pipi enjoys by night. When the jealous older sisters threaten to reveal all, Pipi and his beloved supply themselves with jewels and escape, Pipi clinging to her back as, reswanned, she flies away. In some versions, the swan-damsel converts to Christianity and they live happily ever after; in some, their children are eventually stolen back from them by the vengeful forces of magic.

Not, we can agree, the conventional material of a Requiem.

The seven sections of Spears' Requiem interweave segments from the traditional Requiem mass with excerpts from a Breton telling of the Pipi Menou tale as collected in the 19th century. We are in a realm where magic and faith shade into one another, as further exemplified in Spears' third textual source: a neatly ambiguous 16th century poem—is the love of which it sings carnal, spiritual or both?—by Jean-Antoine de Baif whose speaker compares her(?) self to a "swan of purity," singing most beautifully as it languishes and dies.

And the music? Six singers—two sopranos, three tenors, a bass—are accompanied by a spartan ensemble of recorder, two harps (one ancient, one modern), electric organ, and viola, though long stretches are a capella. Several centuries' worth of harmonic practice are on display; the leaps from one to another have a remarkable organic quality. Requiem feels balanced and suspended within itself in much the same way as Feldman's "Rothko Chapel," but with somewhat more melody and incident joined to the rigor and austerity of its meditations.

Beautifully recorded in the reverberant space of New York's Corpus Christi Church, Requiem is attuned to some deep, immersive sense of time and spaciousness that transports the listener well beyond the ordinary. Utterly unexpected and highly recommended by this Fool.

Value-Added Content: A Flickr set of performance photos from "Hen's Teeth"—caution, some of those birds are topless—can be found here.

I recommend acquiring Requiem the old-fashioned way, as a physical CD. Not only will that provide you with access to the texts, its packaging will allow you to admire the reliably elegant design and typography skills of DM Stith.

Requiem can be streamed in its entirety via the player below. The eerily gorgeous final section, "Postlude," is available as a free download here.

Disclosure: Generally, when I write about music, I have paid my own way, i.e., bought the tickets or the CD or the download, or whatever. In this case, I received an advance review copy. The provenance of the CD had no bearing on my opinions of it. This being my personal blog, if I didn't actually hold the views of the piece that I have expressed above, I wouldn't have bothered to write or to post them. Fair enough, FTC?

Cannot believe this. Was just today perusing the Sonic Festival site, as I'd not been able to get there live, and was almost immediately taken by Gregory Spears' piece Buttonwood. Can hardly wait to read this post--off to a contemporaneous concert now, but, in the words MacArthur, I shall return.

Getting review copies, now, how about that? Love your FTC (including link) disclaimer. But most of all, how serendipitous that, just as I learn of Spears at all, he's got a CD coming out at NewAm. Am listening now, after reading your tantalizing post, and must agree, this is an unexpected pleasure. The instrumentation, the story lines he takes from, well, everything about it looks good.