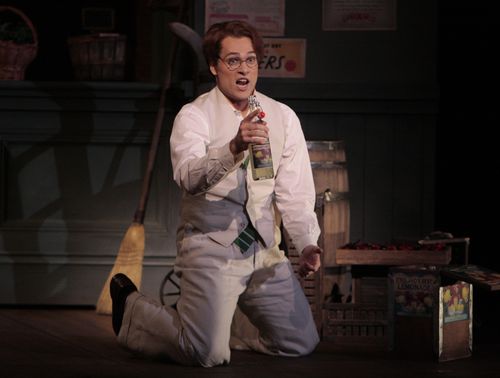 Puritanism, prudery and their ilk are always with us. The aging scold, wielding morality as a cudgel to control the lives of others, glowers down at us across the centuries. This past week in American politics, oddly enough, has been marked by wave upon cresting wave of self-aggrandizing thuggery in the name of All That is Pure and Good. And so it was that Saturday night during the intermission of Los Angeles Opera's performance of Benjamin Britten's Albert Herring, I was moved to launch this remark to Twitter:

Leaving the snoots and the horse's patoots to their own devices for a time, let's say what should be said: Albert Herring is above all a terrific comedy, seemingly all sunshine and innocence at first but, like the glass of spiked lemonade that is its fulcrum, carrying a hidden kick. It would be hard to better musically or dramatically the production now running at the Dorothy Chandler Pavilion, which has to stand as the sleeper highlight of the 2011-2012 LA Opera season. 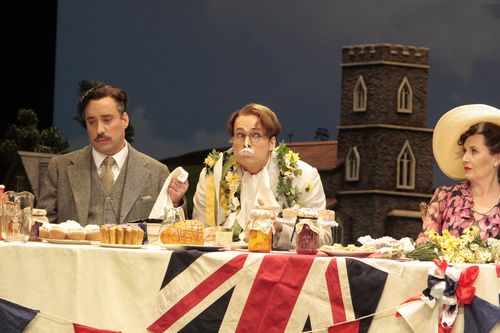 The plot of Albert Herring is simplicity itself. The English village of Loxford lives, in relative content, under the eye and thumb of the censorious Lady Billows. With the aid of her trusty housekeeper Florence Pike, Lady Billows attempts to know all that goes on in the town, and has a particular devotion to the sniffing out and eradication of anything that may even imply the sin of unchastity. Each year, the most chaste and worthy of the Loxford village girls is selected and honored as May Queen. Alas, this year—the year is 1900, but this production is shifted forward to ca. 1947—the selection committee comprised of the mayor, the vicar, the schoolmistress, and the superintendent of police, find that none of their suggested nominees will satisfy Lady Billows' standard. At a loss, Superintendent Budd proposes they select instead a May King, specifically Albert Herring, working with his widowed mother to run the family greengrocery, universally known as quiet, inoffensive and perhaps not all that bright. Lady Billows is persuaded, and volunteers an honorarium of 25 pounds, seemingly on the theory that money can't buy love but may persuade the recipient not to go looking for it.

Albert's reluctance is overcome, with the aid of some threats from his mum, and May Day arrives. Sid, the butcher's assistant—Albert's contemporary, not at all a bad chap, really, but has a way with the ladies and is ready for a lark when he can find one—spikes the May King's lemonade with a hefty ration of rum. A ration of hilarity ensues. Albert determines to find more to life than has been his lot, and disappears into the night. Finding he has gone missing, all assume the worst. But, no: as his mother and others in authority bewail his untimely death, Albert returns with three pounds spent and quite a tale to tell. Lady Billows and company are scandalized, the balance of power between Albert and his mother is equalized somewhat, and everyone lives uncertainly ever after. 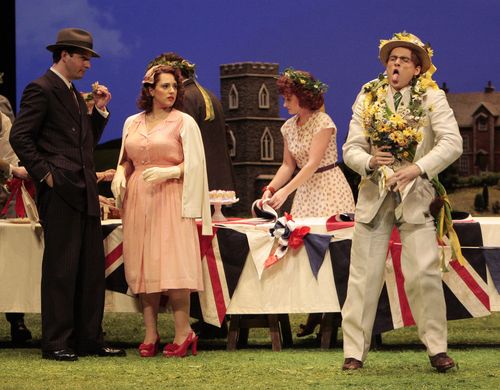 So then: this production comes to Los Angeles by way of Santa Fe, under the direction of Paul Curran. It is, physically, smaller than what typically fills the expanses of the Dorothy Chandler Pavilion. The effect, thanks to particulary clever use of perspective, is not so much that of a small production in a big space as it is of a really fine bit of letterboxing in high definition. A great deal could be said in praise of the scenic design of Kevin Knight and, particularly, the flat out brilliant lighting scheme from Rick Fisher.

Albert Herring is a true ensemble piece, each character being of near equal importance to the whole. The performers here are laudable across the board. As Albert, Alek Schrader is immediately likable, and only grows more so as he reveals what runs deep beneath the still waters of the underestimated greengrocer. Janis Kelly's Lady Billows is formidably unpleasant, while navigating the high flying ornament Britten assigned to his "elderly autocrat." The opera is full of allusions to other composers and other operas, and both Lady Billows and the headmistress Miss Wordsworth (Stacy Tappan) are called upon to emulate Mozart's Queen of the Night, and do so with seeming ease. Ronnita Nicole Miller, as the redoubtable housekeeper Florence Pike, is a particular pleasure, entirely supportive of her Ladyship while always watchful for the chance to relax with a cigarette and movie magazine. Liam Bonner as Sid and Daniela Mack as his best girl Nancy, from the bakery, are the very model of healthy youthful sensuality, for which Lady Billows would surely pillory them if she could.

Britten's score, for a chamber orchestra of thirteen musicians, operates almost as a handheld documentary camera, moving in around and through the action, focusing attention on first this detail, then that, and providing a running commentary. The necessary musical forces are small enough that conductor James Conlon was able to bring the entire orchestra on stage at evening's end, to receive the warm adulation it deserved. 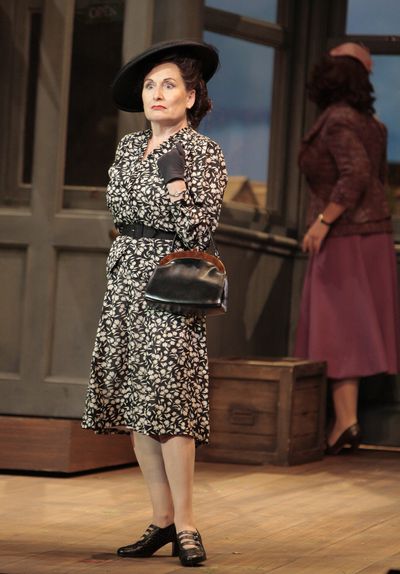 Ultimately, Albert Herring speaks to anyone who is, or who ever was, young and alive and ready to light out for the territory of their own self and to return more fully human. That is a valuable thing, and that this production is continually and genuinely funny is a bonus not to be sniffed at.

Four performances remain through March 17. Christine Brewer, who sang the role in Santa Fe (and who was this blogger's first Isolde, *sigh*) will be Lady Billows in the final two. You really should go, if you can.