Surrealism or Bust
[Tears of a Knife and Breasts of Tiresias,
Long Beach Opera]

In programming an opera season there are ideas that, if they are not pursued by Long Beach Opera, are just not going to be pursued in southern California, or perhaps at all.

A double bill of Surrealist one-act operas would be one such idea.

In practice, it is not a perfect idea but, beginning in fear and unease and ending in a hearty belly laugh, it proves—like certain waistcoated white rabbits—to be more worth pursuing than not. 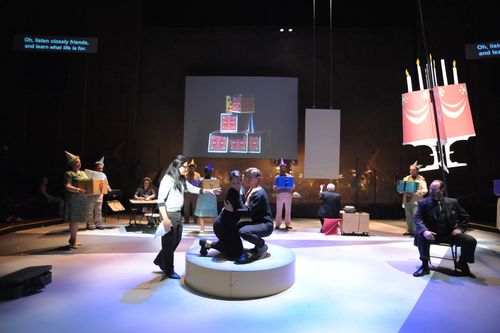 Sunday afternoon, LBO offered up the first of two performances of its pairing of Poulenc's The Breasts of Tiresias [Les mamelles de Tirésias] with Martinů's Tears of a Knife [Les larmes du couteau or Slzy noze]. Tiresias is the main event, with Knife as a curtain raiser, and one would not want to see this program the other way round.

Knife is the more purely (unrepentantly?) Surrealist of these two pieces. Written in 1928, its libretto is the work of Georges Ribemont-Dessaignes, an authentic Dadaist. (A 1920 exhibition of Ribemont-Dessaignes's visual work came with a catalog essay by M. Dada himself, Tristan Tzara.) A distant ancestor of mid-century theatrical eviscerations of domestic life, Tears of a Knife introduces us to young Eleonore who has fallen in love with and wishes to wed the corpse of a recently hanged man. Her highly conventional mother is appalled, preferring a match with their neighbor, "Mr. Saturn." Eleonora goes ahead with her marriage to the hanged man, but he is unresponsive to her. She attempts to inflame him with jealousy, only to find that the faux rival she sets up is actually Mr. Saturn. Ultimately, she kills herself and discovers that not only was her dead beloved really Mr. Saturn all along, "Mr. Saturn" is only a pseudonym for ... Satan!

Tears of a Knife is brief, under 30 minutes, but few would wish it longer. Martinů's music is well-crafted and frequently interesting in the angular, jazz-inflected mode of the early 20th century, but the Ribemonte-Dessaignes text often reduces itself to willfully obscure post-Symbolist poetic fragments, likely no more dramatically potent in French than they are in English translation. After that bitter medicine, however, we are treated to the spoonful of sugar that is The Breasts of Tiresias. Poulenc's 1944 opera is a setting of the 1917 play by Guillaume Apollinaire, who coined the term "surrealist" to describe it. Alongside Jarry's Ubu Roi, Apollinaire's play is commonly identified as the fons et origo of the skewed and rude approach to drama that flowered after World War II as the "Theater of the Absurd" of Genet, Beckett and, particularly, Ionesco. It embraces not only the illogical logic of dreams, but a vigorous wackiness that makes its lampooning of convention far more palatable than the acrid cocktail that precedes it on the Long Beach program. Poulenc filled it with music that is both high-spirited and elegant, ornamenting and elevating the relentless silliness of the plot. It is an explosive bit of operatic patisserie, a lovably ludicrous bombe surprise.

The catalyst for Apollinaire's plot lies in the feminist yearnings of the housewife Thérèse who, having grown tired of the domestic life with her nameless Husband, liberates herself by transforming in to a man: Tiresias. In the play's most famous image, her breasts fly away as helium balloons. She embarks on a life of manly adventure, ultimately becoming a military ruler who decrees there shall be no more births in her domain. The abandoned Husband, meanwhile, dons women's clothing and embarks on a career of spontaneous generation, production tens of thousands of infants in a single night by force of will. In the end, Thérèse returns to her Husband and her original form, and the assembled cast urges the members of the audience to go home and immediately make as many babies as they can. 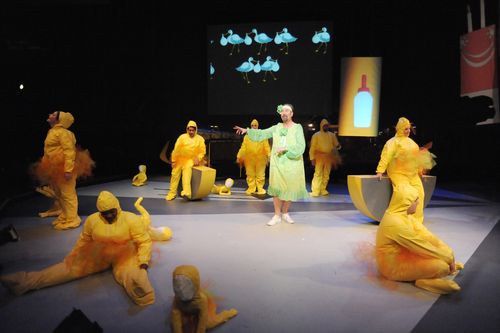 Both operas are mounted in Long Beach under the direction of Ken Roht, who previously oversaw the company's 2010 production of Good Soldier Schweik. As with that production, Rota manages the trick in Tiresias of producing something surprisingly affecting within a raucous, circus-like atmosphere. If he is somewhat less successful with Knife—and he is—the fault lies in the material and not in Roht's conception or in the performers. Roht is aided significantly by the video projections of John J. Flynn: a long, Viola-slow sequence of decaying roses that runs under Knife and a series of risible (and risque) images poking puckishly at Tiresias.

Soprano Ani Maldjian has established herself as a superb singer and skilled actress as LBO's cunning Vixen and a ruthless Madame Mao, among others, and she again brings those qualities to bear on the instability of Eleonore and the aspirations and triumphs of Thérèse/Tiresias. Poulenc gifted his heroine with some exquisitely complex and gorgeous music, which Maldjian negotiates with heartening ease. As Saturn/Satan and the put-upon (and fertile!) Husband, Robin Buck is similarly impressive, especially in the extended sequence in which he must raise his new found brood whilst fending off the inquiries of the press and the amorous intentions of the local gendarme.

The aforesaid gendarme, in a truly terrible wig, is Roberto Perlas Gomez—for once, not playing a king in Long Beach—who also introduces the gender-bending proceedings as the Theater Director and serves silently as a version of Eleonore's deathly beloved. Suzan Hanson (Medea, etc., etc.) fills an abundance of supportive roles—Eleonora's mother, a terpsichorean Announcer of News—with focus and aplomb. Benito Galindo and Doug Jones are Messrs. Presto and Lacouf, a sort of macabre Abbott & Costello (or Tweedles, Dee et Dum) who lose everything to one another at the casino, then slaughter one another in a duel. The chorus and two dancers serve as symbols, shadows, babies, citizens, supernumeraries and what have you, moving everything along as needed.

On balance, when all is said, this may not be the most probing examination of the Surrealist impulse, but it is a varied and ultimately entertaining exploration of a much obscured bit of musical territory, from the only company in the region with the, shall we say, helium balloons to attempt it. 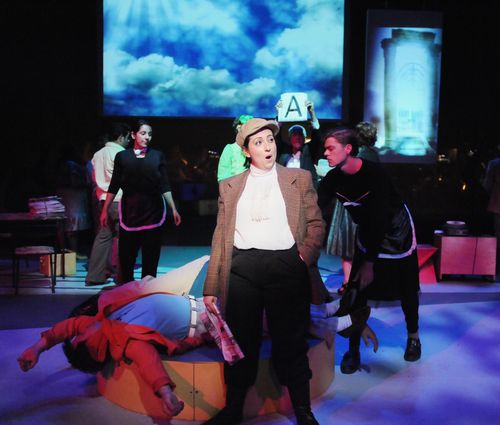 The surrealist double-bill repeats on Saturday, March 17, at 8:00 p.m., in the Long Beach Center Theater, and at least a few tickets remain available at this writing.

I am very late to arrive here, but enjoyed every moment of my stay (including some very tasty links, those re Ribemont-Dessaignes, about whom I probably should have known, but did not, among them). From what I've read about LBO here, I would venture "not at all" to your first comment on the likelihood of performance elsewhere, and more's the pity. Another thoroughly enjoyable review.