Something Boroughed, Something New
[wild Up, "Craft" in Venice] 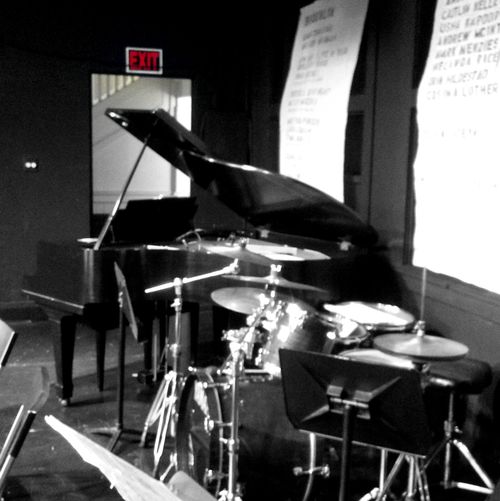 The wickedly engaged and engaging new music collective wild Up returned to Beyond Baroque in Venice on Friday evening (repeated on Saturday afternoon) for a continent-spanning exercise in comparison, contrast, and What's Happening Now. "Craft" was the announced title for the program, which set new music from Brooklyn* alongside new and newer music from Los Angeles. Although it was framed in confrontational terms of "Brooklyn vs. Los Angeles," there was no real rivalry or conflict in evidence. Rather, the evening reemphasized that both coasts are in the midst of an expansive and fertile period of new music making.

A piece by piece rundown: 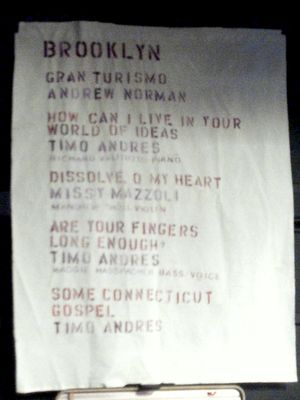 The night began with a jolt of energy and action in the form of Andrew Norman's 2004 violin octet, "Gran Turismo." [Caution: the player at that link launches automatically.] Inspired by the eponymous video game, combined with the speed-and-motion paintings of Italian Futurist Giacomo Balla and Baroque precision string practice, it is (to borrow from John Adams) a short ride in a fast, meticulously crafted machine. The piece moves nonstop, shifting and recombining its parts constantly over its whipfast eight minutes, themes and playing techniques sparking kaleidoscopically from player to player to player, leaving the audience wide awake and fully attentive.

Ordinarily, wild Up is not a conductorless ensemble. The absence of conductor/artistic director Christopher Rountree was explained in an introductory video, revealing that long after this program had been set, Rountree found himself required to spend time this week and weekend as assistant conductor to (ha ha!) the Brooklyn Philharmonic, so that instead of conducting "Brooklyn music" in California, he was obliged to talk to Californians from Brooklyn, about Brooklyn's music and their own.

Composer, pianist and elegant dresser Timo Andres has been in Los Angeles for several days, both to attend wild Up and to perform with the Los Angeles Chamber Orchestra in three concerts featuring his compositions. He contributed three out of five of the Brooklynese pieces for wild Up, beginning with the solo piano revision of his "How Can I Live in Your World of Ideas?", performed by Richard Valitutto. (The original dual piano version appears on Andres' excellent 2010 debut recording, Shy And Mighty

.) Where "Gran Turismo" burns, "How Can I Live..." smolders while tossing out unexpected sparks.

Missy Mazzoli's "Dissolve O My Heart" for solo violin was commissioned and premiered through the LA Philharmonic last year. It alludes to Bach, but quotes him only once before twisting off in its own knotty, pensive direction. It is perhaps the most magisterially off-putting piece of Mazzoli's that I have heard; a piece to be admired rather than loved. Andrew Tholl navigated its sinuous course with focus and grit.

In recent years, an entire performance genre has developed around solo string players—such as violinist Todd Reynolds, cellists Zoe Keating and Jody Redhage, and contrabassiste Florent Ghys—playing off against recorded versions of themselves, often generated with laptop and looping pedals on the fly. "Are your fingers long enough?" (2010), commissioned for and played here by bassist-vocalist Maggie Hasspacher, is a Timo Andres contribution to the genre. Equipment troubles forced a restart, but they were forgotten within moments of launching in to the second attempt. The material that ultimately loops upon itself incorporates more open space and less obvious rhythms than some other pieces of its kind. Midway, the surprise is sprung as Ms. Hasspacher begins to sing a text drawn from Hart Crane, the apparent sweetness of her song—it sounds at first like a child's counting rhyme—poignant against the relative darkness of the bass and the melancholy secreted in the verse.

Andres' "Some Connecticut Gospel" (2008) which closed out the first portion of the program winningly. Written for a mixed ensemble of strings, winds, piano, it is a backhanded homage to the spacious generosity and love of place sometimes displayed by Charles Ives, evoking a sort of Platonic Form of Connecticut and generating a mood of cautious, hoped-for optimism. 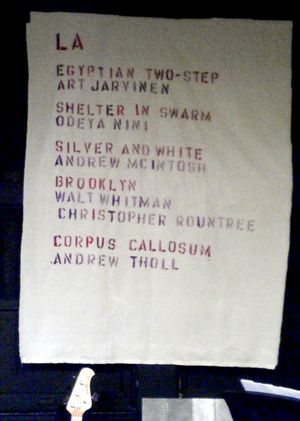 After intermssion, the California segment  of the program began with the oldest piece of the night: the late Art Jarvinen's "Egyptian Two-Step" of 1986. The piece is an eccentric hoot, its twisty marimba part recalling Frank Zappa (with whom Jarvinen was a collaborator), reeds, piano and electric bass shoogalooing about, and twinned cans of compressed air providing rhythmic punctuation. It could not be heard without grinning.

In the absence of Christopher Rountree, it fell to Richard Valitutto to offer some thoughts on "Los Angeles music," which noted the do-whatcha-want quality with which the region is often tagged and the less often noted introspective element of much Los Angeles art. Odeya Nini's "Shelter in Swarm," which followed, was as introspective as Jarvinen's two-step was ebullient, its structure built on microtonal drones revealing glimpses of unlooked for order within a seemingly entropic field.

wild Up violist Andrew McIntosh contributed the premier of "Silver and White" for a quartet of viola, cello, trumpet and trombone. As I craft this post a day later, I find that I have not retained a sufficient memory of the details of the piece to provide you, reader, with a good description of it. That gap in recollection is galling, because it was one of the very best things on offer last night and I am unable to tell you why. I can only say with certainty that the conjunction of strings and muted brass was riveting and that this was a piece that I hope to hear again, and soon.

Christopher Rountree, in absentia and in his role as composer, contributed "Brooklyn," in which his recorded reading of Walt Whitman's paean to the place was set within an energetic musical framework expanding outward, as Whitman himself so often did, from the quotidian toward the galactic, an eloquent roar of approval for being alive and in a time and a place full of other lives.

To conclude by circling back toward the energy with which the evening began, the closing piece was wild Up violinist Andrew Tholl's "Corpus Callosum", a thrilling contraption mirroring the dual nature of the brain structure for which it is named, the elements of the elaborately mixed ensemble pairing off to lob a succession of pulsing, scintillant musical ideas at one another. Where Rountree's piece grabs hold to the living Brooklyn of another era (Whitman's), Tholl bursts out with the sharp-edged glint of the living Los Angeles of today.

So, what have we learned? If nothing else, wild Up's program demonstrated handily that geography is not really destiny at all when it comes to making gripping contemporary music. The awkwardness of the Los Angeles-New York relationship, particularly the West's presumed sense of inferiority, is a cliché in which wild Up will not indulge. Quality is the great equalizer in music, and quality is being generated at an impressive rate on both coasts, and likely in between. To overstate the case a bit, we can part on this note, from notable New Yorker Herman Melville in his effusive essay on Hawthorne:

"Genius, all over the world, stands hand in hand, and one shock of recognition runs the whole circle round."

These are good musical times, and wild Up are their prophets.

*    "Brooklyn" has it seems become the geographical signifier of choice when referring to new music by youngish composers from the eastern U.S., particularly those whose music is also labeled "alt-classical" or "indie classical" or suchlike. This imagined Brooklyn encompasses, at a minimum, all five boroughs of New York and the States of New Jersey and Connecticut. As with many another imagined realm, its exact bounds are obscure, and may be crossed without knowing it.

George, I am so, so glad you reviewed this concert! Sitting here on the east coast, I was getting greener and greener about not being able to go ever since M. Lafferty sent out her alert. In your usual clever way, you've brought the concert "up close and personal." wild Up is definitely a group to watch out for, and I thank you for making them known to me.

As for your memory gap on the McIntosh piece--I'm relieved to see you suffer from this at least once in a long while! I, on the other hand, suffer from this in perpetuity; hence my eternal gratitude to young composers and performers who give me the crutch of audio so I can relisten repeatedly.

Another great review from you.

Yours, from east to west,