Surprise! Blawg Review, the blog carnival for everyone interested in law, is ready for its comeback and its close up.

Launched originally in April 2005, and overseen by the still-anonymous Editor, Blawg Review ranged about across the legal blogging landscape, appearing each Monday in a new and different exotic locale for the next six years before seemingly going silent following its 314th edition this past August.

It has been my pleasure to host Blawg Review on my legal blog, Declarations and Exclusions, on five occasions, beginning with Blawg Review #51. Since April 1, 2006, I have also hosted, here, five April Fools' extra editions, in the same week as the Decs&Excs editions. That's ten hosting turns for me, an ample store of evidence from which our Editor was able to infer that, yes, I'm just a blogger who can't say "no" if you were, hypothetically, to float the notion of refiring the boilers under Blawg Review and ending its sabbatical on an April Fool-ish note. Thus it comes to pass that Blawg Review #315 will be up at Decs&Excs on Monday and that the sixth annual April Fools' Edition is now before your disbelieving eyes.

While the original installments of Blawg Review were simple collections of links to the prior week's best or most interesting or most curious legal blogging, it early on became common, albeit never mandatory, for each host to adopt a Theme for his or her presentation. On this day last year, Blawg Review #305 took the form of a tribute to and adaptation of "I've Got a Little List," from Gilbert & Sullivan's The Mikado. Today, I hope I may be pardoned if I return to the same well and build this 2012 April Fools' edition around another popular G&S number, the introductory song of Major-General Stanley from The Pirates of Penzance, best known by its opening line:

"I am the very model of a modern Major-General." 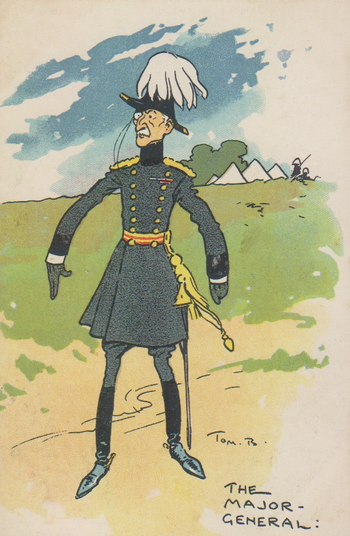 We need not go into the absurd plot of Pirates today. Suffice it to say that it involves pirates, an unfortunate young fellow apprenticed to their service until his eighteenth birthday, the difficulty posed by his having been born on the 29th of February and thereby having had only four birthdays in eighteen years, a collection of young lovelies who are wards in chancery to the aforementioned Major-General, a collection of unhappy policemen, and a joyous, nuptial ending.

Major-General Stanley himself is a figure of a kind W.S. Gilbert delighted in mocking: a man who has risen to a position of stature for which he has no practical qualifications whatever. What the Major-General does possess is a vast store of arcane and useless knowledge bearing on most every topic except those that might make him an effetive military man. He would likely have made a fine blogger, had the Victorian era offered that outlet.

Upon his arrival in Act I, Major-General Stanley demonstrates his breadth of study with this famous patter song. Here it is, as performed by John Reed, principal comedian with the D'Oyly Carte Opera Company in the 1950's and 1960's:

Here, George Rose performs it in the wildly successful 1980 New York Shakespeare Festival staging in Central Park, with Linda Ronstadt as Mabel and Kevin Kline in his star-making turn as the Pirate King:

Sir Arthur Sullivan's catchy tune has achieved a further measure of immortality thanks to its having been adapted by Tom Lehrer to provide the melody for his cataloging of the chemical elements, "The Elements." (Clever title, that.)

Lehrer's song drew renewed attention recently when the performing of it was revealed to be a favorite party trick of Harry Potter star Daniel Radcliffe. Allow him to demonstrate:

And so, with that tune now well-implanted in your ears, we may turn to the matter at hand. Friends, the 2012 April Fools' Prequel to Blawg Review #315:

Blawger-General:
This is the snappy patter-singing April Foolin' Blawg Review.
We're bringing back this legal blogging carnival to all of you
Who've missed it or forgotten it while it's been in absentia:
(A weekly dose of blawging is believed to slow dementia.)
There's many kinds of blawging, folks: it may be theoretical,
From time to time rhetorical, and sometimes alphabetical.
We hope you'll find this parody enlightening and risible....
Inspired by Major-General Stanley's rapid polysyllables.

Blawger-General:
The Law's much more than drafting-stuff-while-sitting-at-your-
desk-ery
And offers opportunities for wackiness, grotesquery,
For odd quixotic ventures, and for trumpery and trickery,
And litigants possessèd by the spirit of Terpsichore.
A matter rather serious we feel we need to mention: you
Should click the links below and take the time to pay attention to
The awful depredations of a so-called blogger/journalist
The Lord High Executioner might add to his infernal list.

Blawger-General:
With cigarettes and chocolates, we try to be responsible.
These clever cartoons educate the criminal and constable.
If you work at McDonald's, all your problems may be supersized.
(These blawgs are all original, there's nothing here
that's plagiarized.)
From blawgs you'll learn a thing or three about judicial etiquette
And dangerous misguided legislators in Connecticut.
Perhaps with an analogy we'll find that a solution'll
Present itself to when a health care mandate's Constitutional.

Chorus:
We do not understand it, all this complicated push 'n' pull!
To find it inter-esting you would have to be delusional!
We like a nice long walk, yes that's a proper daily
"constitutional."

Blawger-General:
You, too, could be an expert, so be sure to trim your cuticles
And brighten your appearance through the use of cosmeceuticals.
Now take the time to listen to a podcast full of Georgery
Or head out to a gallery where ev'ry work's a forgery.
Our time here it is fleeting and I fear I hear it flittering
Or fluttering or flattering or maybe even Twittering
This Prequel's the embodiment of ev'rything that's ex- cell- ent....

All:
And now that Blawg Review is back,
You'll wonder why it ever went!

Here are gathered stand-alone links to all of the blawgs embedded in the lyric above. Where multiple entries originate from the same source, I have kept them together, so the order of links below does not necessarily follow the order of links above.

D.A. Confidential -
"A word in your ear"

Technology & Marketing Law Blog [Eric Goldman] -
"What Do Soymilk and Nutella Have to Do With an Online Harassment Case?--Taylor v. Texas"

California Appellate Report-
"Brantley v. NBC Universal (9th Cir. - March 30, 2012)"
["It basically depends on if you know you're Don Quixote or if, instead, you're actually Don Quixote."]

SCOTUSBlog -
"The RNC shoots itself in the mouth"

Popehat [Ken-at-Popehat] -
"'Investigative Journalist' Crystal Cox's Latest Target: An Enemy's Three-Year-Old Daughter";
"For Plagiarists, The Internet Is A Double-Edged Sword";
"In Which I Dare Connecticut To Come Get Me. COME AT ME, BRO."

The Trial Warrior Blog [Antonin Pribetic] -
"Supreme Court of Canada: Canadian lawyers must turn the other cheek when bench slapped"

Concurring Opinions [Nathan Cortez] -
"Why Can’t We Analogize the Mandate?"

A Georgia Lawyer -
"A New One: 'Cosmeceuticals'"

The Art Law Blog [Donn Zaretsky] -
"Remember when I asked how long it would be before a gallery signed him up?"

Tomorrow [April 2, 2012] BLAWG REVIEW #315 will be hosted at my law and insurance blog, Declarations and Exclusions. Please drop in and sample the wares on offer.

Blawg Review has information about next week's host, future hosts, how you too can become a host, and instructions on how to get your own blawg posts considered in upcoming editions.