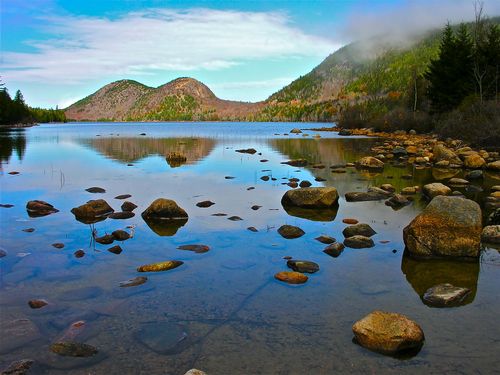 One of the advantages of living in a time of fast, easy, high quality recording, reproduction and distribution is this:

You can and leave this blog right now, go to the site of the Minnesota Orchestra, and download, at no charge, a recording of the Orchestra's March 31 performance of Acadia, composed by Judd Greenstein and conducted by Sarah Hicks.

Even if you don't come back, I know I will have done you a service. When you do come back, it will be my pleasure to tell you why...

Acadia is the product of a "microcommission" process in which hundreds of donations of all sizes were pooled to fund the composition and premiere as part of Minnesota Orchestra's "Inside the Classics" series. The premiere took place on March 30 (the recording is of the second performance) on a program in which it was the only piece played: the first part of the evening was given over to a discussion of the work and its workings, followed by performance of the work itself.

The title, Acadia, refers in part to Acadia National Park in Maine, and to that region where New England ends and shades into maritime Canada. Judd Greenstein has written that the roots of the work lie in a long weekend camping and hiking trip that he made to the Park with a friend, which proved in some important way to be "a pivotal time — literally, in the sense of a pivot — in my life. If I were to break my life into two sections, the first part would end in that Acadian weekend...."

Not a symphony per se, but symphonic in scope, Acadia lasts roughly 35 minutes and is organized in four movements, played without interruption. One way to hear it, as suggested by the composer's description of the change of direction that inspired it, is in very loosely dialectical terms of thesis, antithesis, and seeming resolution through synthesis—followed by a coda of sorts, expanding back out into the larger world. A parallel, in a very different style, might be John Coltrane's A Love Supreme.

The first and shortest section, "Moving," begins with an avian burble and thrum in the strings and winds from which the low brass emerge to state for the first time a rising four-note motif that grounds the entire piece, a marker in the landscape from which the metaphorical traveler can strike out and to which the traveler can at need return. In the second segment, labeled "Adagio," additional motifs appear—a new horn figure descends before circling back in on itself, a dance-like line advances crabwise—and tension builds in with bursts of horns and urgent percussion. The central arguments of the piece are joined in the third and longest segment, "Fast," in which, over a distant bed of metallic percussion that ticks and clangs like a Nibelung pocket watch, musical ideas draw in from every direction, combining or glancing off of one another, yielding unanticipated connection and the sense of new purpose. That purpose is built upon in the concluding section, "First Tempo," in which earlier strains return renewed and emboldened, the opening motif achieving a connection with its more circular cousin in what proves to be a false ending; a brief passage of meditation leads to the true conclusion in slow chords and a swell of bell and tympani.

Judd Greenstein has a compositional voice that is his own, and those familiar with his compositions for smaller groups such NOW Ensemble will hear it plainly in Acadia. It scales up exceedingly well from chamber size to full orchestra. The composer has often acknowledged Ravel as a major interest and influence, and that strand can be spotted running through Acadia. I also hear echoes of Leonard Bernstein—the rhythmic and modal approach to the dance-motif I mention, for example, would not be out of place in Mass—and the unexpected presence of Carl Nielsen, particularly when the hurly-burly suddenly falls away at a critical central moment of the third movement.

Acadia is always serious but never ponderous. Its forward momentum is constant but never frenetic. Its rhythmic and tonal palette is shifty and mercurial but never flippant or confused. It asks for, and never fails to reward, the listener's attention.

Beyond the excellent recording that Minnesota Orchestra is generously sharing with the world, Acadia deserves to be taken up and widely played by other orchestras, and to become a permanent addition to whatever equivalent we have to a contemporary canon. It is, in the true and original sense, sublime.

Bravo! Bravo! And you are now linked over at PD. Coast to coast praise for Acadia!