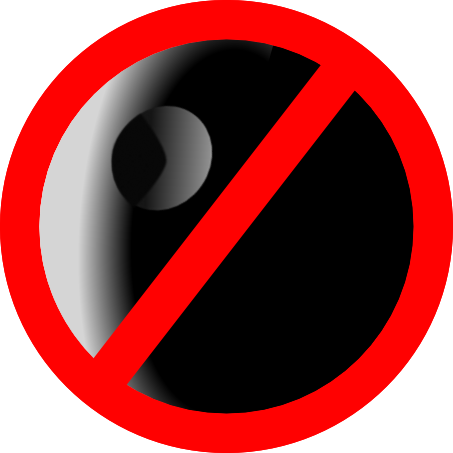 We take it as a given that the Death Star, in the Star Wars films, is evil in itself.

It may be wielded by men who are themselves innately evil—the Emperor—or by men who have fallen under evil's sway—Vader—but it makes no difference: the Death Star is not an object open to redemption.

It is an evil device, and it is not made more or less evil by the degree of evil present in the individual humans behind it.

There is no suggestion, really, that a "kinder, gentler" Death Star is a possibility.

The very existence of a Death Star is an evil, and it would remain so even under the presumptively enlightened rule of a successful Rebel Alliance. What choice would the triumphant Alliance have but to dismantle the thing as quickly as possible?

Are we in agreement thus far?

Where, then, does the evil in the Death Star lie?

Is it in the sheer vastness of its destructive power? The ability to reduce a planet such as Alderaan to powder?

Does the Death Star become less evil if it empowders only half a planet, or only very small planets?

Does the Death Star become less evil if it can level no more than a mid-sized continent?

The Thieves' Quarter of a city?

Apartment 22C, where that irritating (and possibly even evil) Mr. ExemBexumBinksenmurtttt lives?

Just him, only him?

And perhaps, unintentionally but unavoidably, the shoe shine guy to whom Mr. ExemBexumBinksenmurtttt's custom happens to be given at just the moment that the Death Star's uncannily precise albeit uncannily destructive power is unleashed—

by its presumptively benevolent masters,
from the comfort of their state of the art terminals,
on orders produced by a rigorous vetting process
engaging multiple layers of unidentified but plainly trustworthy functionaries
who are doing what is best,
as you would understand if only you knew what they cannot tell you,
at the end of a long day just in time to head home
to the kids and a stiff martini
and maybe Game 3 of the championship series

—to rain death without warning, remorse, or appeal, from the sky?

Is it less evil then?