Something in the Air Besides the Atmosphere
[Hilary Hahn and Hauschka : Silfra] could have gone wrong down any number of regrettable paths, most of them leading to the dreary nether zone populated by the chittering shades of purposeless "Classical Crossover" recordings. But it did not. Rather, by dint of superior skill or rigorous commitment or perhaps just good fortune, Silfra emerges as a unique and rewarding creation, a lapidary melding of sound and idea that deserves extended and repeated attention.

The story has it that in 2008 violinist Hilary Hahn was introduced to the Düsseldorf-based composer/prepared-pianist Volker Bertelmann, who records and performs as Hauschka, by folk musician Tom Brosseau. Brosseau had collaborated with Hahn, and he was a label mate of Hauschka's on Fat Cat Records. A few weeks later, Hahn joined in a 5-minute improvised performance with Hauschka at the end of a Brosseau show in San Francisco. By the end of those five minutes a slow growing creative seed had been planted.

, but there was no public indication that the two were at work on anything larger until March of this year, when Hahn's label, Deutsche Grammophon, announced the forthcoming release of Silfra. In fact, at about the time that Salon des Amateurs was being released, Hahn and Hauschka were in Reykjavik's Greenhouse Studios, where they recorded Silfra over ten days in May 2011, after two years of planning and long-distance rehearsal.

While Hilary Hahn will be the best known participant in this project for most listeners, I am far more familiar with Hauschka's previous work—and for that matter more familiar with the work of co-producer Valgeir Sigurðsson—than I am with Ms. Hahn, who is known to me only by reputation. The music of Silfra was for the most part created on the spot through the two musicians improvising an initial track together, then jointly or individually improvising further in response to it. The use of a variously prepared piano for Hauschka's parts added a further layer of the unexpected to each performance.

Much of Hauschka's work here is of a piece with the range of styles and tactics he has displayed in his own releases. That said, this is arguably the best version yet of those styles and tactics. "Bounce Bounce"—the 'single' of sorts, since it comes with a lovely hand-animated submaritime video—is in many ways a quintessential Hauschka number, violin and piano each setting their own insistent percussive counterrhythms as they slew across one another. Similarly, the stately dance rhythms and frayed and faded overcoat moodiness of "Kraków" would slip easily in to, say, Ferndorf

. Stepping away from his prior work, however, Hauschka also explores a more abstracted, atmospheric approach on several Silfra tracks, laying a ground over which the violin can rummage for a path.

Hilary Hahn meanwhile, freed from the set expectations and more regimented milieu of the symphony hall and the Classical repertoire, has taken the opportunity to press and stress her instrument to see just how much she can command from it—and given her acknowledged technical prowess, she is able to command a great deal. Her explorations and discoveries in these pieces have less to do with unexpected notes or chords than with exploring of the range of tone and color and feel that her violin can produce. Silfra is in part an extended meditation on how the violin can sound, without venturing too far over the line toward distortion, and how it can be recorded. This is particularly the case in the album's long central piece, "Godot," a 12+ minute single take during much of which the piano takes on the role of contemporary percussion ensemble while the violin enters and recedes with snatches, drones, twitches and wails, until the two parts subside at the last to a resigned trudge of quiet chords beneath a fragmentary, plaintive melody.

Will Robin earlier this week posted an insightful piece on Silfra on his blog, Seated Ovation, in which he speculates persuasively on the extent to which Valgeir Sigurðsson, as engineer and co-producer, is almost a third performer in bringing Silfra to its final form. Sigurðsson today strikes me as the heir to Brian Eno's seminal work as a producer/musician in the late 1970s and early 1980s, with a clear willingness to embrace happenstance as opportunity, and to treat the recording studio as an additional instrument of sorts. In the case of Silfra, the fortuitous combination of Sigurðsson, Hahn and Hauschka yields music that is well-wrought at its center while shading intriguingly at its edges toward an unresolved horizon.

First, DG may call it an Electronic Press Kit, but I call it a Coming Attractions trailer. Pretty good whate'er its name, with glimpses of the Hahn/Hauschka/Sigurðsson triumvirate at work:

Second, Hilary Hahn vids and chats up Volker Bertelmann as he Prepares his Piano: 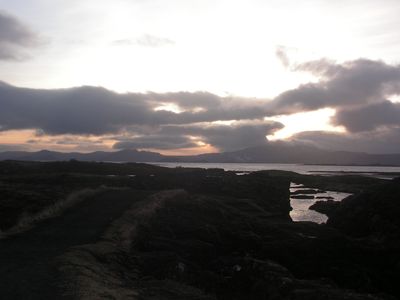 Silfra is scheduled for release May 22. This post is based on a requested review copy of the CD.

Photo: Silfra Fissure near Lake Þingvallavatn, Þingvellir National Park, Iceland, via Wikimedia Commons. The album title refers to this rift or fissure outside of Reykjavik, filled with glacial melt water of near perfect clarity and marking the point where the North American and European tectonic plates meet.

Hey George, great review, and I agree with Will's statements as well.
I'm writing my own review of the record as well (Thanks NPR), so be on the lookout for that! :)

Hell of a review, all the more excitable the record, cheers.

I do find this an interesting project, no question, and enjoyed both yours and Robin's takes on it. Puts me in mind of a post by Andrew Lee at I Care If You Listen, about performers as co-composers. I do like the concept (after all, I was brought up on jazz), and I certainly can understand the desire of classical performers to break out of the traditional box. On the other hand, I'll have to confess that I have a fondness for hearing an individual composer's vision. This is not to say there can't be room for both. I'm in a wait and see mode, I think: it'll be interesting to see what develops.