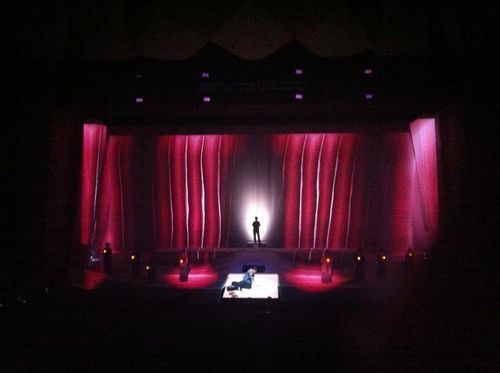 I am not generally one for sports metaphors, but if an opera company could be compared to a major league slugger, Long Beach Opera has been on a successful hitting streak since at least the start of its 2009 season. Not a home run every time, but a surprisingly high number of them, and always at least a double or a triple. To put it another way: One of these nights, LBO is finally going to disappoint me again, but Sunday night was not that night as the company sent Osvaldo Golijov's Ainadamar lofting toward the wall.

The subject at hand in Ainadamar is the death of the great Spanish poet and playwright Federico García Lorca, "Ainadamar" being the centuries old Arabic name ["fountain of tears"] for the Fuente Grande ("large fountain") in the town of Alcafar some miles outside of the city of Granada. It is generally accepted that García Lorca died there, executed by Nationalist militia elements loyal to Francisco Franco at the outset of the Spanish Civil War in August, 1936. The poet's remains have never been found, although the search has continued as recently as the past decade. 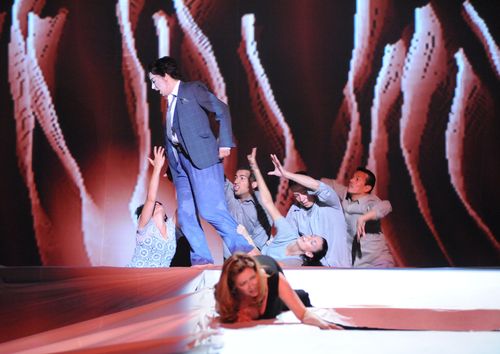 Golijov and librettist David Henry Hwang frame one death with another: the opera is a memory piece, unfolding in the final hours of the actress Margarita Xirgu in Montevideo in 1969. Xirgu had been a favorite of García Lorca's, playing principal roles in the original productions of most of his plays during his lifetime. She had urged him to seek safety by joining her in [pre-Revolutionary] Havana, but he remained in Spain. (Only two weeks ago, the Guardian purported to reveal the identity of the lover for whom the poet fatally lingered.) Following his murder, and during a time when his works were banned in his homeland, Xirgu became the keeper of the García Lorca flame in the Americas. In Ainadamar, she speaks of the poet a last time to one of her students, Nuria, while the events she describes play out around them. Ainadamar is postured more or less explicitly as a secular Passion, with García Lorca as sacrifice and redeemer of Spanish art and the Spanish soul.

The three central roles in Ainadamar, including that of García Lorca, are written for women, and Long Beach Opera is fortunate to have an ongoing relationship with three exceptional singing actors to fill those roles. Suzan Hanson, who sings Margarita Xirgu, has associations with LBO since 1995. Ani Maldjian (Nuria) joined the company in 2008, while Peabody Southwell (García Lorca) first appeared in 2009—as the Fox to Ms. Maldjian's Cunning Little Vixen in the production that for me marks the start of that string of hits to which we earlier alluded. All three singers appeared in last season's Medea, but their roles there were largely separate. Here, they combine to ravishing effect, as Golijov has provided not one but two extended trio passages of great richness. Between the three of them, Ainadamar is something of a survey course in What Sopranos Do. The student Nuria is the least developed character, but her high ornamental music is perfectly suited to Ani Maldjian. Suzan Hanson brings gravitas, passion and a refined exaltation to the dying Margarita. Peabody Southwell as the poet is riveting, a combination of Cocteau's Orpheus with the young and unstoppable Chaplin, ambiguous, desired, unattainable and, in death, a transfigured intermediary with the sacred. This is, incidentally, the second time this season that Ms. Southwell has been brutally killed by Spanish-speaking Fascists: she suffered a similar fate in Piazzola's Maria de Buenos Aires. 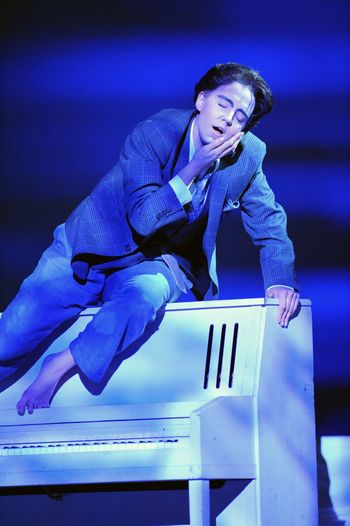 Long Beach Artistic Director Andreas Mitisek has long been trying to mount a production of Ainadamar. It was announced for the 2007-2008 season, but canceled due to fiscal constraints. This season, the opera was to have been staged in the now empty Long Beach Tribune building, but that plan was scuppered by a construction project even as rehearsals were beginning. Forced to relocate and completely reconfigure the production, the performances were transferred to the Terrace Theater at the Long Beach Performing Arts Center.

As revised, the large proscenium stage of the Terrace is draped in white fabric through most of the performance, the better to display the partially improvised "real time" video projections of Frieder Weiss. At the center, a small playing area contains a chair where Margarita Xirgu speaks of the poet one last time. The 8-woman chorus rises and falls, Rhinemaidenlike, from the pit. (The large orchestra, conducted by Stephen Osgood, is secreted at the rear of the stage, unseen until time for curtain calls.) García Lorca's final days play out around the remaining stage space.

Weiss's projections dominated (for better or worse) last season's LBO staging of Akhnaten. In Ainadamar, they are deployed with a more ambient organic subtlety, lending atmosphere and supporting the drama without constantly gesturing for our attention. Fine as the projections are, the most striking image comes when they subside: in the closing minutes, as Xirgu leaves the material world behind, the dead poet pulls down the the fabric at the rear of the playing area to reveal a Paradisal vista of gently glowing chandeliers. 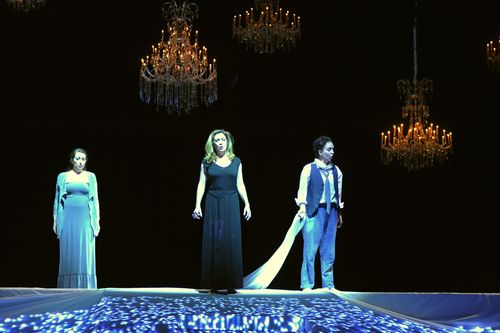 So, then: another high yield, stimulating at-bat for Long Beach Opera. One inning performance remains - this coming Saturday, May 26 at 8:00 p.m. The Terrace is a big house, so tickets are likely still available.

Amazing how those opera singers rise up to live again after brutal killings, isn't it? Good thing, though, given opera plots. Dumb comment aside, this looks to have been another adventurous and well-mounted production over on the Left Coast. Lucky you to have witnessed it and lived to tell the tale.

Susan Scheids comment made me laugh... truly amazing how many deaths and resurrections occur in the space of a couple of hours...