Home Archives Profile Subscribe
Mr. Bischoff's Music Box of Wonders
[Jherek Bischoff, Composed]
"Bottle of Claret for you if I had realised…"

Things Not Seen
[The Man Who Mistook His Wife for a Hat,
Long Beach Opera] 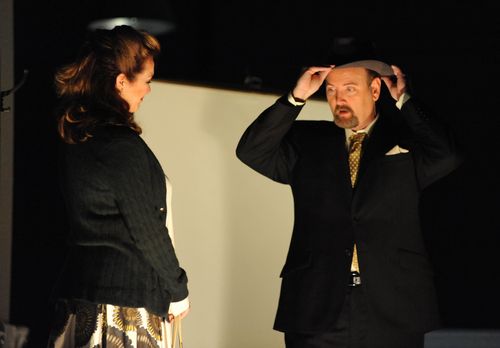 In 1985, neurologist Dr. Oliver Sacks published The Man Who Mistook His Wife For A Hat And Other Clinical Tales

, essays describing and meditating upon some of the more unusual cases he had encountered over years of inquiring into the enigmas of the mind. The book was a surprising and long-lived success. Composer Michael Nyman immediately obtained rights to the title piece, intending to adapt it as an opera. The resulting work, with a libretto adapted by Nyman and Christopher Rawlence, premiered in 1986.

As performed by Long Beach Opera as the final production of its 2012 season, The Man Who Mistook... is an intricate miniature puzzle box secreting at its heart—further puzzles. It is a piece that appeals, albeit quietly, to the old Aristotelian standbys, pity and fear, and leaves the viewer to wonder at the degree to which The World may exist only in our perceptions of it and in our unspoken agreements on what those perceptions signify.

The libretto sticks closely to Dr. Sacks's original essay, in which he describes his investigation and diagnosis of the case of "Dr. P," an internationally successful singer and respected musical instructor whose behavior has grown progressively more eccentric. It emerges that Dr. P's perception of the exterior world has come unmoored from the visual: he can perceive shapes, forms, even intricate patterns, but no longer processes clearly the broader context of what his eyes see. At the same time, his overall mental faculties remain acute, and he is particularly attuned to information he receives through sound or rhythm: he will not recognize a familiar person who stands still, but the sound of a voice or even the perception of the particular way that person moves will trigger completely "normal" responses. In the end, Dr. Sacks ["Dr. S" in the opera] learns that Dr. and Mrs. P have adapted to his condition by constructing a way of life structured around predictability, order, and the association of recurring events with music ("eating songs, dressing songs"). The only advice Dr. S offers is that Dr. P should make "more music" of his entire life, for without music he fundamentally ceases to be.* 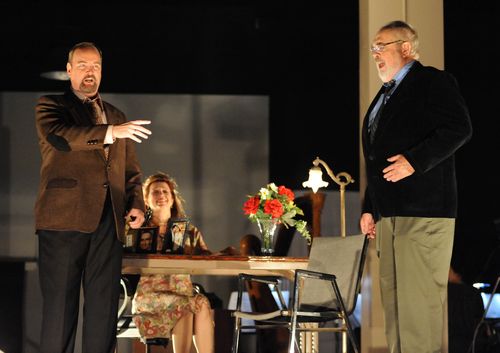 The Man Who Mistook... is compact and distilled in most every way: it runs little more than an hour, involves only three characters (Dr. S, Dr. P and Mrs. P), and is scored for a string quintet, harp and piano. The score is rooted in [so-called] minimalism, relying principally on swirling recursive chord figures in the strings, but also evokes and paraphrases art songs of Robert Schumann, pieces often performed by Dr. P. (At one point, Drs. P and S join together in singing an excerpt from one of the most particularly sorrowful songs from Schumann's Dichterliebe.) The combination of minimalist rigor and Romantic colorations proves powerful, a simulacrum of sorts of the patient's interior lives.

Long Beach Opera has always emphasized engagement with the drama as much as the music in the operas it chooses to stage, and on that score the three LBO-veteran principals here are more or less perfectly cast. Suzan Hanson's Mrs. P ranges through worry, protectiveness, denial, and the quiet assertiveness of a woman willing to change the external world itself if need be, the better to match it to her husband's. As Dr. S, tenor John Duykers combines low-key demeanor with a focused curiosity and fundamental sympathy as he seeks the nature of Dr. P's condition.

At the center of the production's success is baritone Robin Buck as Dr. P, the object of all our inquiries. Buck's Dr. P is a well of uncertainty, from which are drawn unexpected moments of beauty and confidence, as in the Dichterliebe excerpt or when P describes the bucolic riverside scene that he perceives in what is actually a photo of a parched desert. The fine vocal turn is supported by an equally nuanced, fully realized physical performance, centering particularly around the eyes.

Benjamin Makino, who deftly navigated the shoals of 2011's The Difficulty of Crossing a Field, conducts the seven member ensemble with a steady, not pushy, propulsion that eases smoothly in and out of the more overtly expressive sequences. The staging, by director David Schweizer, is straightforward and semi-naturalistic, as Dr. S meets the Ps first in his office and then in their home before pronouncing his diagnostic opinion. The piece offers little in the way of external action, and Schweizer successfully avoids letting it fall in to inertia.

The Man Who Mistook... is an intimate, precision instrument with which we are reminded that oftentimes our knowledge of ourselves and others is simply the sum of its gaps.

The Man Who Mistook His Wife for a Hat is being staged in the EXPO Building, the former furniture store previously used for LBO's 2011 production of Medea. Two performances remain, next Sunday, June 24, at 2:00 and 7:00. [Tickets.]

The blogger attended this performance as a subscriber, at his own expense.

* In his original essay, Dr. Sacks did not identify a specific medical cause for Dr. P's "visual agnosia." Pathologic examination following Dr. P's death apparently determined the root of his condition to have been an unusual variant of Alzheimer's Disease that affected only the visual centers of the brain, leaving the other faculties unmolested.

Interesting that Nyman was so taken with this he immediately bought the rights. I wonder whether, when he bought the rights, thinking opera, he had any idea the resultant piece would be on such a small scale.