Here at the Western World
[wild Up - "WEST" - Hammer Museum] 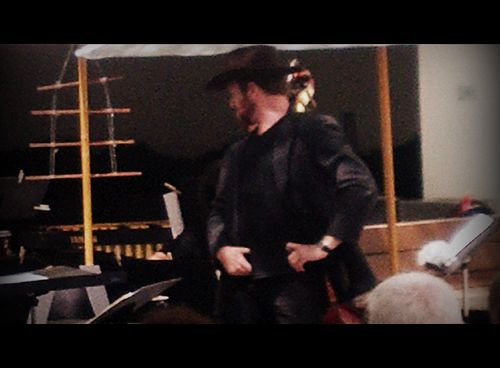 Los Angeles contemporary chamber orchestra wild Up has fans. Not "regular attendees" or people who simply "enjoy" their performances. Fans. Full-on enthusiasts, craving the mixture of homegrown original commissions, creative arrangements con reimaginings, and fire-breathing straight-up performance of challenging pieces from the repertoire that are the wild Up stock in trade.

Through December, wild Up is attached to the Hammer Museum in Westwood as the institution's first "orchestra in residence." On Saturday, the ensemble took to the museum's courtyard for "WEST", the first full-scale concert of its residency. The fans, this blogger among them, were in evidence.

The mythical, Italianate west of Ennio Morricone's film music bracketed the afternoon, beginning with an arrangement by Isaac Schankler of Morricone's theme for Sergio Corbucci's Il Mercenario (sometimes known in English as A Professional Gun). A bravura opener, the arrangement featured a throbbing trumpet solo, a battery of percussion including clanging brake drums, and conductor Christopher Rountree (seen in letterboxed widescreen action above) displaying his formidable skills as a whistler.

In his 3 Meditations on California Girls, Andrew Tholl had his way with three songs of that name by Katy Perry, the Beach Boys, and the Magnetic Fields, each movement manipulating a discrete, recognizable slice of the original. The most succesful section was probably the first, which plucked out a sliver of Perry's song—the four-note descending "Cal-i-forr-nyuh" melody that connects the chorus to the next verse—and derived from it a slow canon less eminiscent of melting popsicles than of the "Air on the G String" or a Beethoven slow movement, imbuing it with an unexpected gravitas. Inserted between the movements of 3 Medi-Cal Girls were two other pieces: a trio arrangement of Eric Dolphy's "Something Sweet, Something Tender," its honks and bleats at home in the stew of sirens and low-flying aircraft that filtered down in to the courtyard, and the slippery rollick of Silvestre Revueltas' Ocho por Radio (8 Times Radio), a reminder that The West does not stop at the Mexican border. The second segment of the program began with a ritual humming chant, climaxing in a highbrow variant on the Harlem Globetrotters "bucket of confetti" joke, all in tribute to La Monte Young. That done, wild Up settled in to a trio of vastly different works, each performed with riveting conviction.

Above Chiangmai is one of the more haunting vignettes on Harold Budd and Brian Eno's Ambient 2: Plateaux of Mirror

—still in this blogger's view one of the most purely beautiful recordings ever made. wild Up performed it in an arrangement by Chris Kallmyer, who achieved the extraordinary feat of capturing free-drifting essence of a piece built on piano and the processed sounds of a piano, without a piano. In its place, Kallmyer turned to such topsy-turned arrangements as electric guitar played, ever so gently, with a tympani mallet, and the wispy keening of chimes played with a bow. Aircraft, sirens and buses for a moment subsided into resonant stillness.

And then: Arnold Schoenberg's Chamber Symphony No. 1, Op. 9 (1906), the beast—maestro Rountree's term—from which all contemporary chamber orchestras are sprung, in which the composer tosses late Romanticism in to the stock pot, reduces and concentrates it, and serves up it with a side of its own bleached bones. Apart from the generally known fact that Schoenberg spent the latter part of his life complsing and teaching in Los Angeles, this piece has a specific L.A. connection: thirty years after he wrote it, Schoenberg returned to it, arranged it for full orchestra, and personally conducted its premiere by the Los Angeles Philharmonic. The Chamber Symphony is twenty-odd minutes of ferocious and constantly shifting musical challenge, and the wildUpistes took it on without fear, earning themselves another of several ovations.

While listed last on the program, the Schoenberg left room for one more: a second Isaac Schankler Morricone arrangement, this the most famous of them all: a fully elaborated version of the theme from The Good, the Bad and the Ugly. It was most assuredly the first of those three things.

wild Up continues in residence at the Hammer until December. All concerts are free with museum admission. 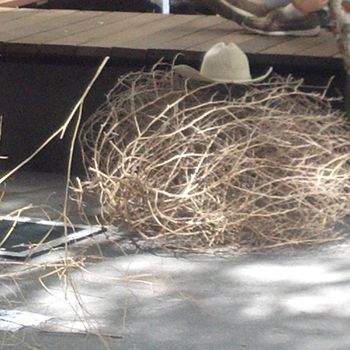 After working closely with Morricone's music in making his arrangements, Isaac Schankler wrote about it, and about its unsuspected ties to the early 20th-century avant-garde, for New Music Box here.

wild Up's next full-scale performance at the Hammer will be September 1. For its summer-ending BACH-BQ, the merry band promise to have its way with J. S. Bach's Brandenberg concertos.

"Bottle of Claret for you if I had realised…"

Apparently my self-absorption knows some bounds: it did not occur to me until just now that today, July 2, marks the Ninth Anniversary of the inception of this blog. Having sprung this realization upon myself all unexpected, I have not shown the foresight nececesary to craft a traditional poste nostalgique. Perhaps if I am still here for Anniversary Number Ten next year, I will overcompensate.

Here, then, an appropriate musical interlude: Matt Marks' arrangement of the Beatles' "Revolution 9" as performed by Alarm Will Sound.