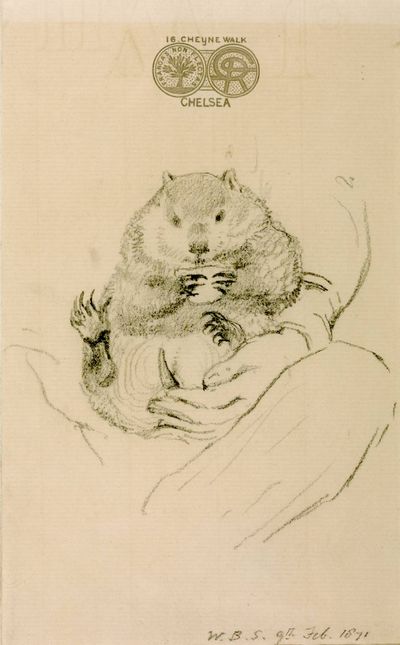 I AM THE WOMBAT OF D. G. ROSSETTI

In the Southern Hemisphere
They say that the creatures are terribly queer:
Some of them poisonous,
Some of them vicious.
Furred, but with duck’s bills!
Or scaly, like fishes!
But I, sir —
You see me, sir —
Harmless and dreamy, sir —
Make my acquaintance: I’m pleased to be here.

I am the wombat of D.G. Rossetti,
Imported to London from over the seas.
When Maestro Rossetti was wanting a pet he
Sent off a request to the antipodes.

There a bold sun-burnished strapping Australian
Beat through the bush to see what he could see.
Searching through forests eccentric and alien,
He found a burrow and there he found me.

Many months later I came to the jetty,
Was met by my master, Christina, and Jane.
Now I am the wombat of D.G. Rossetti:
I live in Cheyne Walk and I walk on a chain.

Kangaroos relish their fisticuff combat
Whilst I on the other hand flee from a fight.
In London I am the preeminent wombat,
The only one owned by a Pre-Raphaelite.

I have been called both a joy and a madness,
Delightful to all who my company keep.
When some day I die of homesickness and sadness,
My master will fall to his knees and he’ll weep.

Fighting his tears he’ll erect a memorial,
Hon’ring the wombat what wuvved him so well,
While my marsupial soul incorporeal
Sighs from on high like some blest Damozel.

He taught me Italian and fed me spaghetti:
All chubby in Chelsea, I couldn’t stay long.
I was the wombat of D.G. Rossetti:
Though mortal in life I’m immortal in song.

Yes I was the wombat of D.G. Rossetti —
Though mortal in life I’m immortal in song!

This waddling lyric is the result of a bit of free association on Twitter last week between soprano Jennifer Behnke, composer Garrett Shatzer, and myself. I am afraid 'twas I who inserted wombats in to an otherwise perfectly serious train of thought about poetry. At length, I decided to take a run at lyrics for a wombat song, and here we are.

I hear a tune for this in my head, a Victorian music hall waltz of sorts, but your own imagination may lead you in other directions.

Illustrations: "Rossetti's Wombat Seated in his Master's Lap," pencil drawing by William Bell Scott, on Rossetti's letterhead, from the holdings of the Tate. A sketch of the wombat by William Michael Rossetti, provenance unknown.

"Mrs. Morris and the Wombat," pen drawing by Dante Gabriel Rossetti, original in the holdings of the British Museum, image via The Rossetti Archive. 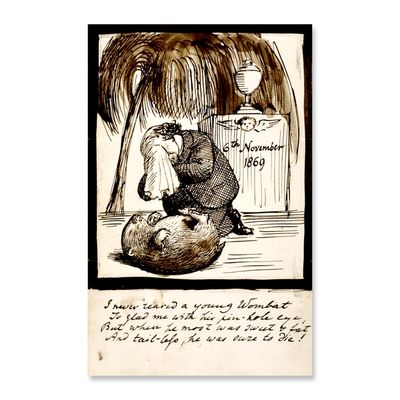 "Rossetti lamenting the death of his wombat", pen drawing by Dante Gabriel Rossetti, from the holdings of the British Museum.

Well, this is fairly (actually completely) hilarious. Glad you flagged the Twitter conversation, as I've not been over there too much of late. I loved this: "Wow! A wombat. I didn't see that one coming. :-)." And what came after that point in the twittersation, well, beyond price!