At the eminent What About Clients? blawg, Dan Hull and Holden Oliver have gone and done it, reposting Henry Fuseli's vision of Nick Bottom and Titania reine des fées shown below or, as they say in the trade, infra.

"I consider it a challenge before, etc., etc., and I don't intend to lose," he said, Mercurially.

Hence, this revisitation of my own cobwebbed poetic tribute to Queen T and Nicky B: 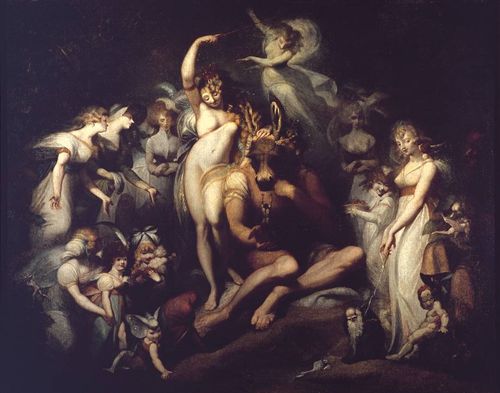 When Bottom bore the donkey’s head and brayed,
Titania wreathed his upstart ears with flowers
‘Til — disenchanted, open-eyed, dismayed —
She cast him from the comforts of her bowers.

Botanical elixirs were the tools
With which the weaver and his fellow rude
Mechanicals, with other mortal fools,
Were fuddled, led astray and misconstrued.

Old Athens’ misty woods and fogbound lovers,
Her naiads, pixies, fairies, sprites and elves
Are gone; but surely Puck still grins and hovers
As modern men make asses of themselves.

No spell but self delusion clouds their sight,
And leaves them pathless in the summer night. 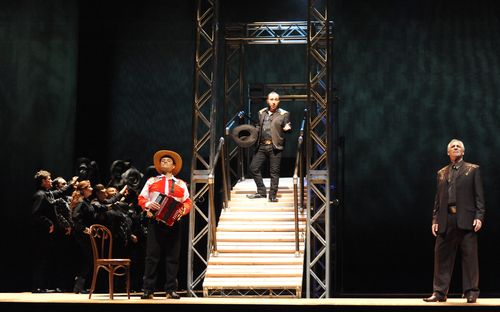 The general notion of Opera does not associate it with current events and social ferments, but topical engagement has a long history in the opera house. The class struggle embedded in Beaumarchais' Marriage of Figaro was still a sore spot for many aristocrats when Da Ponte and Mozart operatized it. Verdi was politically active in the unification of Italy, and the assassination depicted in Un ballo in maschera was as recent to his audience as the events of John Adams' Dr. Atomic are to us. Adams' Nixon in China, dismissed by some at the time of its premiere as mere "CNN opera," opened the door to an ongoing string of new opera examining political and cultural events and figures.

Camelia la Tejana: Only the Truth is one of these, and is receiving its first U.S. professional production now via Long Beach Opera. Composed by Gabriela Ortiz, Camelia's libretto is described as being "compiled" by Rubén Ortiz Torres [the composer's brother and a noted visual artist in his own right] "from various sources", emulating the method favored in recent collaborations between John Adams and Peter Sellars. The piece explores not so much current events as the landscape in which they are played out and processed, the intersection of art, media, belief, truth and untruth. 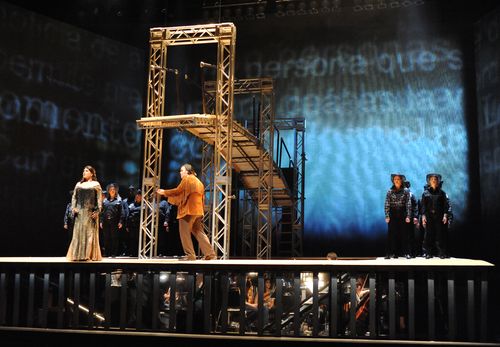 For those who—not unlike this blogger—are unfamiliar with norteño music: the woman known as Camelia la Tejana ["Camelia the Texan"] features in the song "Contrabando y Traición" ("Contraband and Betrayal"), which in 1974 made superstars of Los Tigres del Norte. The song tells the story of Camelia and her lover, Emilio Varela, smuggling marijuana from Tijuana to Los Angeles concealed in their vehicle's tires. When the deal is completed, Emilio announces that he is leaving to join another woman in San Francisco; this news is not received with equanimity. "Seven shots rang out" and Camelia and the drug money were not heard from again. That is, they were not heard from again until the song, with its tale of a woman standing against male domination, proved so immensely popular that it spawned two additional songs, several films, and a fervent belief the Camelia must be, or must at least be based upon, a real woman.

The operatic Camelia springs from an actual incident some years after the figure of Camelia had taken root. In Ciudad Juarez, one Eleazar Pacheco Moreno killed himself in a fit of drunken pique by laying his neck across a railway line. His locodecapitation was reported by the lurid tabloid ¡Alarma! in a story suggesting that the mysterious Camelia la Tejana was real, was still alive, and was somehow connected to the tragedy. (¡Alarma!'s slogan, "Únicamente la verdad", provides the opera's subtitle.) The opera is a collage of investigation, speculation, and fabrication, as a somewhat more legitimate journalist investigates Camelia's possible reality.

The Camelia of the song hovers over the proceedings, manifesting at intervals above it all. Two different women each claim to be her: one tells of childhood rape, a life on the run, and eventual redemption as an evangelist, the other demands "absolute discretion" but tells little, denying that she killed anyone (and by the way the man she didn't kill wasn't named Emilio) and asserting that her only run-ins with the law have been "administrative discrepancies," minor fines involving, ahem, "imported goods." Both women deny that there is a word of truth in the song, while implying that they are the truth behind it. A U.S. scholar comments in English. The songwriter of "Contrabando y Traición" tells how he made the whole thing up. Jorge Hernandez, lead signer of Los Tigres, is pointedly ambiguous in his beliefs concerning a figure who has loomed so large in his group's success. A blogger weighs in conspiratorially—with the sort of profanity that is rigorously disdained by this blog. Nothing is ultimately resolved: you believe what you want to believe ... and the legend will outlive us all. 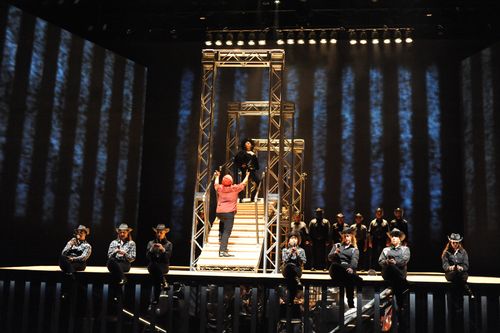 The Long Beach production, directed by Mario Espinosa, spins the fractured facets of Camelia''s mirror ball on a high platform surrounding the orchestra, traversed by a structure recalling the international bridges connecting the U.S. and Mexico across the Rio Grande. A stream of evocative video imagery—train tracks, border wire, the zeroes and ones of the digital world—plays out on the surrounding walls.

Musically, Camelia is a mash of contemporary composition technique—some minimalism here, a lot of postminimalism there, tonality eschewed, tonality embraced—spiced with norteño tuba and accordion and enveloped in electronic soundscaping, eventually subsiding to the legendary Camelia singing a melancholy a capella arrangement of her song. It is all well done, but (other than the corrido itself) hardly hummable, if that's the sort of thing you insist upon.

The hard working chorus does much of the narrative heavy lifting, while members of the Nannette Brodie dance company play out yet another, high body count version of Camelia's story throughout. Teresa Rios is dancing/pantomime Camelia, last seen running and running and running toward apotheosis. Singing Camelia, in all of her manifestations—legendary Camelia, evangelical Camelia/Agustina Ramirez, and Woman of Mystery Camelia—is Enivia Mendoza. Nova Safo charms in his brief appearance as Jorge Hernandez, "El Tigre," the very model of a self-effacing superstar who knows he is one. John Atkins brings appropriate self-importance to the role of the U.C. professor. Adam Meza fills several roles, including the disreputable blogger, with vigor, while John Matthew Myers is earnest as can be as the inquiring reporter for la Jornada. The flying severed head of Eleazar Pacheco Moreno is uncredited. 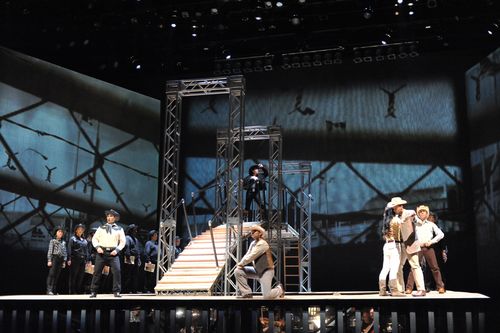 Camelia la Tejana is an opera more to be admired than loved. It is undeniably smart and well made, if occasionally as murky as the clashing "truths" that are its subject. An imperfect but ultimately intriguing piece of contemporary music drama, worth a trip by the adventurous to the Terrace Theater where its final performance will run on Saturday, March 30.