What Kind of Thing Makes a Noise Like That?
[Big Farm: Big Farm] 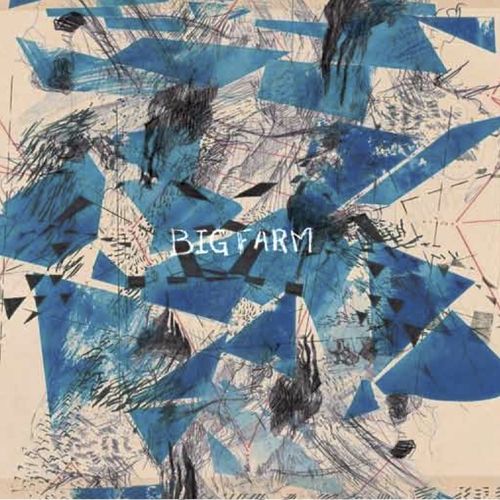 Put on your sturdy boots and let us walk the rows, turn the soil and delve deep into the fertile loam that is the highly diggable Big Farm

Big Farm is both album title and band name, the band consisting of Steven Mackey (guitar), Rinde Eckert (vocals and accordion—stay with me now), Jason Treuting (drums and percussion), and Mark Haanstra (bass). In other words, a quintessential rock ensemble. More to the point, an ensemble that closely parallels the two great quartet versions of King Crimson. The sound worlds of Larks Tongues

period (Fripp, Bruford, Adrian Belew, Tony Levin) provide a good if imprecise reference point in thinking about Big Farm which, yes, unapologetically embraces many of the attributes of the oft-maligned (and oft-unfairly maligned) genre of "Progressive Rock." (Other sidelong touchstones might be Frank Zappa, albeit stripped of the juvenile potty humor he embraced, or perhaps Gentle Giant, a band deserving of reassessment and of a better defense than that offered by Rick Moody a few years back.)

In contrast to the original generation of Prog Rock musicians, who were fundamentally rockers looking to import elements of classical, jazz, and avant-garde musics into a rock idiom, the members of Big Farm all bring maximal New Music/cultural credibility to their band project. Steven Mackey played guitar in bands in Northern California in an earlier life, but embraced more formalized composition training and now, as his day job, heads the Music department at Princeton. He has collaborated regularly with Rinde Eckert, who sings, acts, composes, writes, and has earned (among other honors) an Obie award and a Pulitzer nomination in his own right. Two Mackey-Eckert projects—Dreamhouse

and Slide (aka, on record, Lonely Motel)—have been nominated for or won Grammy awards in recent years. Jason Treuting is a founder and core member of modern percussion ensemble Sō Percussion. Mark Haanstra is a much admired, jazz-based electric bass player headquartered in the Netherlands. All of Big Farm's songs are credited to the members jointly, though investigative work can trace at least a few of them to individual composers.

Big Farm begins, in "Like an Animal," as life itself does: lost in the dark, on the edge of panic, wondering at every stray sound, searching for the way out to someplace else. Things lost and damaged—love, dreams, identities, lunch—are present or missing in profusion in Big Farm songs. Time passes. Time "has mustard on her hands" in "Break Time." Time comes between us and those irrecoverable "Salad Days." Time creates the illusion that it is not passing while we are "Lost in the Splendor" of belief in love. And in "She Steps," the charming woman with the purse and the dog and the thoughts of Provence is, all unbeknownst, mere moments from death at the hands of speeding drunk.

The elves and spaceships of old school Prog are nowhere in evidence. Oh, there are ghosts—even an entire song called "Ghosts," drawn from Mackey and Eckert's Slide—but they are made less of ectoplasm than of angst. The protagonist of Jason Treuting's "Margaret Ballinger" is something of a ghost in her own life, a contemporary Eleanor Rigby, sinking into her bath at the end of a day with "nothing left to lose," possibly not planning to rise from it again. "My Ship"—not the Weill-Gershwin tune, more like "Dazed and Confused" with lyrics by Burroughs or Bukowski—introduces a correspondent from "the land of spoons and needles" who hits us up for food or a ride and shares a lame joke or two and wanders off in a haze. Big Farm ends not in death but in a stasis of maturity as Eckert enters into countertenor range, sweet and bruised as a Britten choirboy, to share what "John Knows": that you can't quite trust the face you see in the mirror.

And, other than some quiet times with Margaret or John or a fixedly contemplated piece of rice paper, Big Farm rocks. Steven Mackey's guitar is everywhere, flinging power chords, crying the blues, deploying prickly harmonics, prowling and striking. Jason Treuting never met a polyrhythm he didn't like, apparently, and is ably joined on the bottom by Mark Haanstra's fluid bass. Rinde Eckert, meanwhile, floats and dives and lurks through the hubbub, as much actor as singer, shifting on a dime from sneer to croon to falsetto to patter/rap to bellow and back again. It is riveting stuff, embracing the full range of modern unease.

For me, the big story on Big Farm is how much pure pleasure I have been deriving from it. I have had the benefit of a review copy since early spring, and it has rarely strayed far from whatever device I am listening with at any given time. The performances, the writing, the recording, the sequencing, the pacing, the eccentrically meshing gears of rock and art song: it is all seemingly effortless and seamlessly satisfying. The first half of 2013 has seen a string of very fine new music releases, more of which I hope to get round to writing about here, but even in that strong company Big Farm stands out. At midyear, it is an almost prohibitive favorite to top this fool's "favorite albums" list come December.

Highly recommended to anyone with ears and a soul below 'em and a brain betwixt 'em.

Big Farm releases on May 28, via New Amsterdam Records. Until the release date, the entire album is available to stream exclusively at I Care If You Listen.