All Mozart on the Western Front:
Kenneth Branagh's Magic Flute Receives a US Release 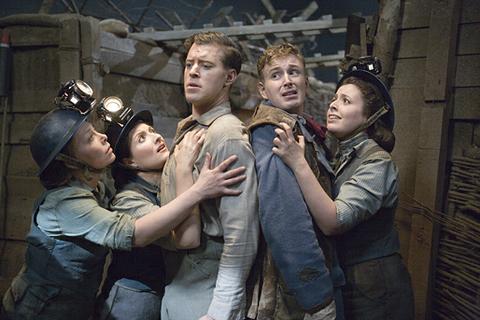 Seven years after first becoming available in the rest of the world, Kenneth Branagh's film adaptation of Mozart and Schikaneder's The Magic Flute

has at last received a US release, with a selection of theatrical showings over the weekend (the theatrical trailer is below) and a DVD release earlier this week. The film was originally released in Europe in 2006, to coincide with the sestercentennial [250th anniversary] of the composer's birth, but it did not receive US distribution at the time. Los Angeles Times classical music critic Mark Swed stumbled upon it in 2008 and bemoaned the absence of a legitimate Stateside version.

As well he might, because Branagh's Flute, with an English adaptation of the libretto by Stephen Fry, is a lively smile-inducing charmer, broadly and immediately appealing. Greatest opera film ever? Hardly: that would likely be Ingmar Bergman's Flute

(once you disqualify Bugs Bunny and the Marx Brothers). Does the world need another Flute? One can never have enough Flutes, really, and Branagh's offers plentiful justification for the work's enduring popularity.

Abandoning the quasi-Egypt of the original, Branagh has reset the tale in and around the trenches in the latter part of the First World War. This seems less for purposes of commentary on that war, or on War generally - beyond the message that Peace is much to be preferred - than for the purpose of having a distinctive and attractive production design. As in Branagh's Shakespeare films, everyone and everything looks great. Even when they are flooded and muddied during Tamino's and Pamina's testing by water, these are some of the prettiest trenches you have ever seen. (This must have been by choice: Branagh is no stranger to depicting the grit and misery of warfare, as in his Henry V.)

Here, the prince Tamino (Joseph Kaiser) is an army officer—seemingly British, but any one-to-one mapping of historical allies and enemies breaks down almost as quickly as the weather, which bounces from high summer to snowy Yuletide and back, seemingly in a single night. During the bravura overture—built around a marvelous long tracking shot through the trenches, up, over and out to the massed forces—Tamino leads his men across No Man's Land in a frontal assault on the opposing line. His fellows largely felled, he finds himself facing not a fearsome serpent, but a cloud of poison gas. The three Ladies of the Queen of the Night ( arrive as frontline nurses, all in white. The Queen herself (Lyubov Petrova) enters fearsomely atop a tank, backlit and wind-machined. Papageno the bird man (Benjamin Jay Davis) is a weary infantryman, his birds kept to detect gas attacks; he himself is encased in a gas mask when the Ladies seal his overeager mouth. The noble priest Sarastro (René Pape) now presides over a ruined chateau turned field hospital turned temple, gently bringing about the inevitable bonding of Tamino with the Queen and Sarastro's daughter Pamina (Amy Carson) and the more earthy union of Papageno with Papagena (Silvia Moi) while incidentally shedding a bit of Masonic enlightenment on all and sundry. 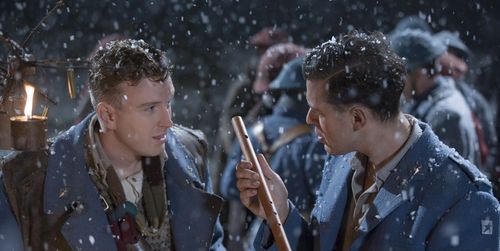 The orchestra is the Chamber Orchestra of Europe under the direction of James Conlon, whose principal day job is as musical director of Los Angeles Opera. LA Opera-goers know from experience that Conlon is a dab hand at Mozart, and the playing here is uniformly fine.

Flute has been and remains perhaps the most immediately lovable piece in the standard opera repertoire, and the qualities that make it so lovable—a fairy tale love story, plucky comic relief, and the fact that Mozart's score bears pleasure on all its surfaces while revealing ever more pleasures the deeper the listener digs down into it—are all on display. Where Bergman (as one would expect of Bergman) was interested in the Flute's more sublime and philosophical corners, Branagh is out to show us a good time in the company of a masterwork. Mission accomplished.

[This post was written on the basis of a review copy of the DVD provided by the distributor, Revolver Entertainment. As my curiosity about this film had nearly driven me to piracy in the past, I was well pleased to have a legitimate copy tumble my way.]

Very pleased to see this. I think one can have one too many--thinking of Julie Taymor's production--but the combo of Branagh and Fry, well, that's quite another matter.