Music, drama, art and technology conjoin and entwine in the world premiere production of Christopher Cerrone's opera, Invisible Cities, which opened at and in Los Angeles Union Station on Saturday evening, presented by operatic innovators The Industry. The production's successes are many, and such weaknesses as it has are intriguing in themselves. Whether or not it shows the way to a new mode of opera presentation, Invisible Cities is a richly fascinating expression of a multifold and rewarding new work. The original announced performances, through November 8, are reported to be sold out, but there is some possibility of additional dates being added. 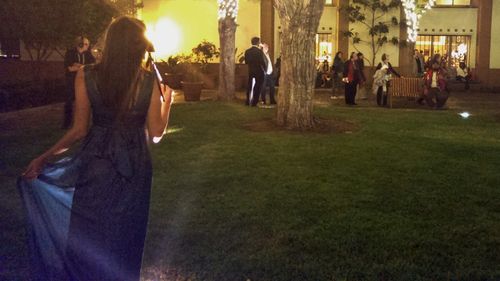 The work itself is a rich and marvelous thing, an opera of quick intelligence, resonant emotional depth, and lingering ambiguity. The libretto adapted by the composer from the novel by Italo Calvino, Invisible Cities emulates its source in having no conventional plot to speak of: it turns on a series of conversations between the emperor Kublai Khan and his Venetian merchant visitor and emissary, Marco Polo. The Khan's empire has grown so great that it is impossible for him to know it completely, beyond the certainty that it must fade. That the emperor might know more, Polo tells him of the many cities that Polo claims he has seen in his travels. The cities themselves are beyond knowing and, indeed, beyond belief: cities built on stilts and aerial walkways, cities in which every room is filled to its ceiling with sand, cities unheard of by the people who live there, abandoned cities, cities of the dead or the dying or the unremembered. Calvino spins out dozens of these cities; Cerrone's libretto focuses on three—Isidora, city of spirals and many women; Armilla, a lost city of water pipes inhabited by nymphs; and Adelma, whose citizens resemble those the traveler knows to be already dead—plus the equally unbelievable Venice, which Polo fears he may lose by speaking of it.

Polo and the emperor are themselves fictional inventions of Calvino and the librettist in this context, of course, and they cast doubt on whether they are really who they claim themselves to be even under those qualified conditions. Polo departs to return to Venice in the end, urging his host to continue to search for what is worth remembering and to hold to it. (In a move reminiscent of Britten's use of Yeats, Cerrone interpolates the famous lines from Eliot's "Little Gidding," that the end of exploration "will be to arrive where we started and know the place for the first time." 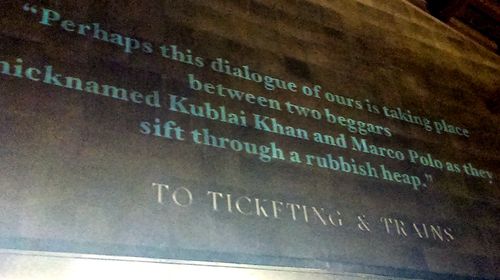 Kublai Khan (Cedric Berry) and Marco Polo (Ashley Faatoalia) are the only named characters. Two women, Woman 1 and Woman 2, sing as representatives of the cities, and a four-member mixed chorus enwraps and fills vocal space as required. In addition to the singers, the cast encompasses eight dancers from LA Dance Project, the company recently founded here by Benjamin Millepied (choreographed here by Danielle Agami).

The musical forces deployed consist of an 11-piece orchestra centered on prepared and unprepared pianos, harp and assorted percussion, supported by a small complement of strings and wind instruments. The music wends and spills over it banks in a wash of sad enchantment and chastened reflection. A sampling from the opera's seven scenes can be heard here. It is, to leap ahead and oversimplify, a beautiful and resonant piece that merits a continuing life after this premiere. 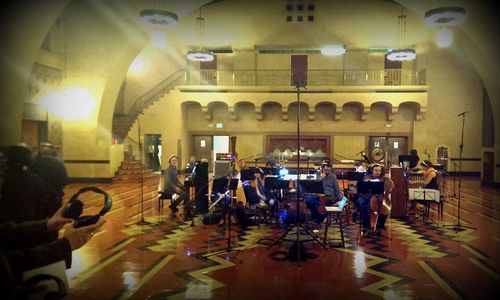 The musical satisfactions in its score should make Invisible Cities a recurring pleasure simply to listen to*, but how does one translate that into engaging live theater? The central challenge in staging Invisible Cities is that the absence of "plot-plot"—action and incident—might make it appear static and uneventful in a traditional proscenium setting. Director Yuval Sharon and The Industry have finessed that challenge in an inspired move: using wireless sound technology, they have untethered the singers from the players and from one another, and similarly untethered the audience from the performers, and set them all free (within bounds) to roam an open ended space, performing and experiencing the opera together without a need for actual physical proximity.

The space in question is Los Angeles Union Station, formerly the southwestern terminus for the Union Pacific, Southern Pacific and Santa Fe railroads, and still a busy regional rail and transit hub. Each audience member was provided a high-end wireless Sennheiser headset, and each heard the same opera at the same time. The orchestra and singers were fully mic'd and equipped with discreet earpieces of their own. Their performances were fed into a sophisticated mixing console to be transmitted back out to them and to the audience. The lot of us (other than the stay-at-home orchestra in the terminal's historic Fred Harvey restaurant space) wandered about, looking to find one another and to see what might be seen while the musical end of the performance played out in our heads. Throughout, the station continued its regular evening operations: passengers arriving, passengers departing, travelers and the displaced alike sitting, waiting, sleeping, watching as bits and pieces of an opera broke out around them. 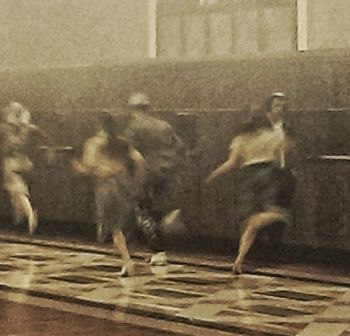 The audience was first convened in the restaurant to be greeted and to hear the overture—during a period when he had little hope of the opera being produced, Christopher Cerrone spun off the overture as an independent piece, which the Los Angeles Philharmonic performed as part of its "Brooklyn Festival" earlier this year—at the end of which we were set loose about the premises.

Three principal terminal spaces were used in the performance: the main concourse and waiting area, a pair of outdoor courtyards on either side, and the enormous original ticketing lobby of the station, which is typically used today only as a site for film shoots. Polo and Kublai Khan began in separate parts of the complex, eventually meeting face to face in the concluding scene. Each began in contemporary dress, the great Khan a seemingly humble figure in a wheelchair. How long he had sat there pre-performance, unnoticed, who can say. Unless you spotted his earpieces and mic, he would have looked like any other injured or disabled passer-through. Polo began, and remained, in baseball cap, flannel shirt and red ski vest, occasionally checking his phone or settling at a table to sip a glass of water.

The two Women were in motion through the evening, in an array of more costume-like robes and dresses. Masks were donned for singing of Venice. The chorus and dancers, variously bedecked as travelers from various points in the past century, appeared and disappeared, rising from the crowd or discovered mopping a floor or repacking a suitcase. The action played out in multiple locations simultaneously, so no attendee could see everything that was happening at any given moment. The emperor eventually rose and walked, disappearing for a time at the far end of the now befogged ticketing cavern. with the dancers and Women as subtle guides, the entire audience found its way to that room by independent routes, to find Kublai Khan emerging in full imperial regalia for his farewell to Polo. 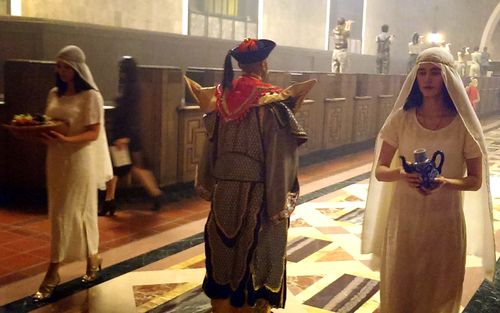 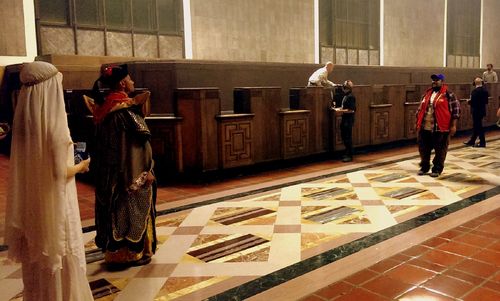 Although the technical end of the evening's project was carried off with impressive elan, it was not perfect: it may have been only my own headset, but I was beset by occasional random interference that, when it occurred, distracted from the immersive feel of the performance. The headset itself grew slightly tiresome in extended use, but removing it to let air into the porches of sweaty ears meant no longer hearing any singer not in the immediate vicinity nor the orchestra secreted in another building. Since the piece is definitely worth hearing in its entirety—and required extra attention on this first occasion simply by virtue of being new and previously unheard—even brief interruption was a minor irritant. All that said, the headset generally functioned exactly as promised, and the sound mix as transmitted was particularly well done, with the life and presence one would hope for from a particularly authentic live concert recording. (The singers' microphones even picked up a shading of sound from their immediate surroundings, lending an extra air of ambient verisimilitude to the sound in the headsets.)

I chose to stay on my feet through the 70-minute performance. Others elected to sit down from time to time on their way. The potential aggravation at "not seeing everything that is happening" passed quickly, overcome by the enveloping presence of the music and singing and by the sense of shared adventure or pilgrimage with my fellow travelers. Given that the performance was in such an open and public place, no one was discouraged from photography, and thousands of cell phone photos (such as those in this post) must have been taken, by audience and bystanders both. 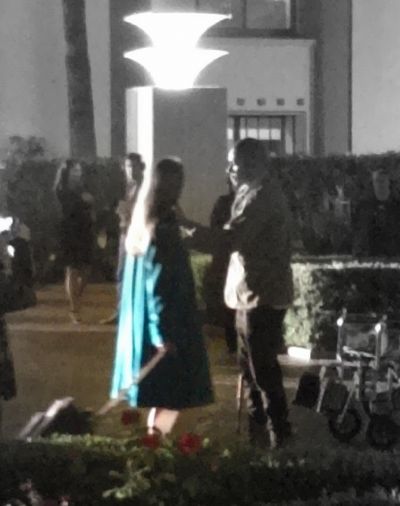 The verdict? On its own terms, this production has to be deemed a solid success. It is a fine piece of operatic writing, performed with grace and vigor by musicians and dancers alike, and the experience of landing in the middle of it was exhilarating. The technology is not perfect, but what is? Even with my quibbles, it delivered very nearly all that was asked of it. Did I mention that the opera itself is really really good? Yes, I suppose I did.

This is not—and, to be fair, was not being sold as— The Future of Opera. The bulk of the repertoire, including work already receiving workshop support from The Industry, would not adapt well to the headset approach. But in this singular case, a fatefully successful meeting of art and technology has indeed paid off. Well played, all. 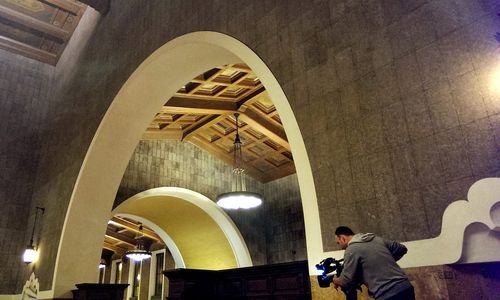 As of opening night, all future performances were reported sold out. There is talk of additional performances, and I would recommend interested readers keep track of the Invisible Cities website linked above for updates.

* The blogger attended this performance as a ticket holder, at his own expense. Additionally, Invisible Cities was partially funded by a Kickstarter campaign, to which the blogger was a contributor, at a level that promises a complete audio recording of the production. The blogger believes he chose wisely in this regard. 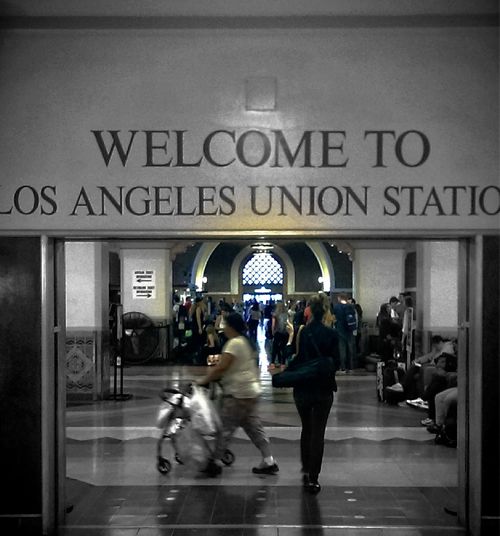 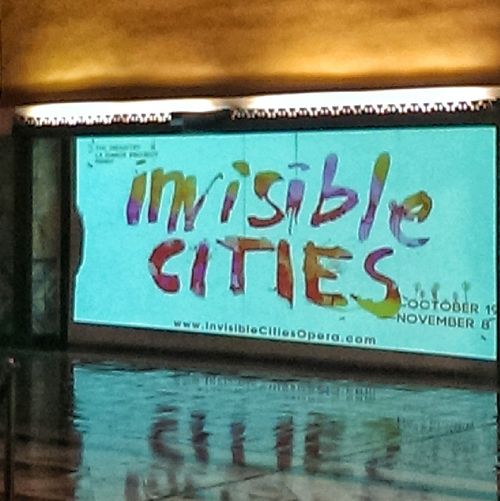 After reading this, if any tickets were available I would get one and make a special trip from San Francisco to see this. It sounded promising as a concept, but to read that it delivers so handsomely on execution is wonderful to read about.

I envy those who get to experience this and look forward to one day catching one of The Industry's productions in the flesh.