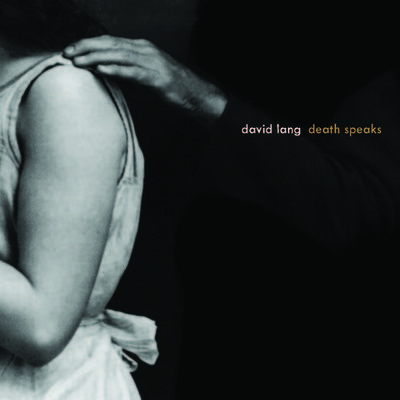 It may be [it is] hackneyed to say it, but there is yet a modicum of truth in the proposition that the creative act can be taken as a constant howl against human mortality. At the least, art provides a lens through which we mortals can contemplate that mortality, think about the ending of things, and perhaps enter into a truce of sorts, whether easy or uneasy, with Death.

Death has been a recurring presence in recent recordings of music by David Lang. His Pulitzer-winning the little match girl passion

ends in a death—two, really, as the match girl's suffering final hours are held in parallel with the Passion and Crucifixion—and explicitly contemplates a supernatural life beyond. The collection of Lang's piano music, this was written by hand

, included the eight Memory Pieces, each dedicated to preserving Lang's memory of a dead friend. All of these compositions looked at death and now, in death speaks

, Death looks back. And not only looks back, but pulls up a chair and settles in for a chat.

Lang's process in crafting death speaks was to pore over the German texts of songs set by Schubert and to cull out the numerous occasions on which Death is personified and addresses the singer or the listener. He then translated those passages roughly in to English and arranged the results in new order suitable for resetting to [un-Schubert-like] music.

Death, as it turns out, is fond of humankind. Death yearns for human company, feels sadness over human suffering and loss, and offers to make it all better. Being as it is Death that makes it, the offer is vested with equal parts succour and unease. Death here requites the longing famously anatomized by Keats in the "Ode to a Nightingale":

Darkling I listen; and, for many a time
I have been half in love with easeful Death,
Call’d him soft names in many a mused rhyme,
To take into the air my quiet breath;
Now more than ever seems it rich to die,
To cease upon the midnight with no pain,
While thou art pouring forth thy soul abroad
In such an ecstasy!

Originally conceived as a companion to little match girl, death speaks shares with it an essential stillness at the core. Where the sonic austerity of the largely a cappella match girl emulates the extreme cold of its tale, death speaks is, with a trio of guitar (Bryce Dessner), keyboard (Nico Muhly), and violin (Owen Pallett), a slightly warmer affair. Akin, though, to Milton's "darkness visible," the voice of Death sings here with a sort of radiant cold.

That voice is Shara Worden, and it is her extraordinary, nuanced and characterful performance that makes death speaks work so powerfully. Worden's Death has an awesome glamour, in the oldest sense of those terms; she ensorcels her hearer, enwrapping and binding total attention from her first word ("You") to her last ("stops"). Lang's arrangement of his texts is remarkable for the smoothness with which it draws everything into itself, but Shara Worden expands beyond those texts such that death speaks is ultimately, unspeakably moving. Highly, highly recommended.

Accompanying death speaks on the recording is "Depart," a wordless 18 minute piece for multitracked cello [Maya Beiser] and female vocal quartet, commissioned to be played in the Salle des Departs, a space in a French hospital in which the living can contemplate the passing of their loved ones. Vaporous and oddly gorgeous music, remniscent of the circulating, descending motifs in Brian Eno's "Sparrowfall" pieces.

Blogger's note: I began writing this post last May, when death speaks first released, but found myself unable to finish it in a presentable form. I returned to it in connection with my year end favorite music list, on which death speaks stands in first place. I still haven't finished full-ish posts on most of the other recordings on that list, but as today is the composer's birthday (b. January 8, 1957), it seems a proper occasion for putting at last it up.

Postscript: In June 2014, Long Beach Opera will be revisiting its production of Lang's The Difficulty of Crossing a Field. My enthusiasm for the original 2011 performance was vociferous. You should go, if you can.

Beautifully expressed--down to the well-placed "ensorcels." And indeed Worden does, as I remember it from the live performance. The CD is on its way to me . . .