Grim Grinning Ghosts Come Out to Vocalize
[Pacific Opera Project: The Turn of the Screw] 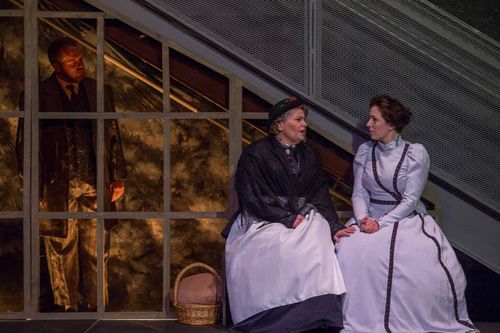 Down an industrial side street south of downtown Los Angeles, a few blocks from the heart of Skid Row, there is opera being made, and made well, this past weekend and next. The location is the theater inside the unexpectedly situated Inner-City Arts, and the occasion is Pacific Opera Project [POP] staging Benjamin Britten's adaptation of Henry James's The Turn of the Screw.

POP is that grand quixotic thing, the plucky/spunky opera company. Founded little more than two years ago, POP's first production was a supremely intimate version of Bernstein's Trouble in Tahiti with props and sets more or less literally crafted from cardboard cutouts. I saw it, and I liked it, as much because of its "poor theatre" qualities as despite them, but I did not know then that the company would hang in and grow as, it seems, it has. With Turn of the Screw, POP now has nine productions to its name, including all three Mozart-Da Ponte operas—and only one Puccini, which is all to the good.

Turn of the Screw is a change of pace for the company, which since Tahiti has stuck to the generally-hummable repertoire (and will continue to do so with a Carmen in March). The company's Artistic Director/prodction director Josh Shaw and Musical Director/conductor Stephen Karr have taken Turn of the Screw head on and done all that is needed to put up a production that, while it forges no new ground in its conceptual approach, is compelling from beginning to end and shows off to full advantage a piece that is certainly. between Britten's music and the near-perfect construction of Myfanwy Piper's libretto, one of the very finest music dramas of the 20th Century.

Straitened resources notwithstanding, POP's production is in no sense "backwater opera." Rather, it does credit to everyone involved in its creation. 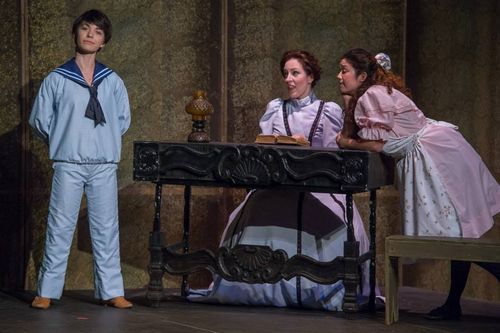 We have been fortunate in Los Angeles in recent decades to have two very good productions of Turn of the Screw via Los Angeles Opera. (Here are my thoughts on the better and most recent of them, in 2011.) Even those, however, had to fight not to lose impact in a house as large as the Dorothy Chandler Pavilion. One of the virtues of POP's production is to restore the opera to its proper "chamber" size, and to a scale where its effects and subtleties are more readily received by the audience. The results are consistently gripping.

The stage area is shallow, but also wide and tall, with a balcony that wraps around to the audience's right. Resourceful use of screens, scrims, shadows and windows adds depth and variety to the playing space. (Josh Shaw serves as designer as well as director, with lighting by Ryan Shull.) The forestage is occupied by blue fabric that, with the aid of fans and light, transforms as needed into the grim lake where the spirit of the late Miss Jessel first makes herself known.

The orchestra—Britten's full complement of thirteen—hidden in almost plain sight on the upper level, won through convincingly against a tricksy score at Saturday's opening performance. The percussion was occasionally out of balance and a touch clangy, and one or to string passages went foggy, but the reeds and harp particularly carried the evening. 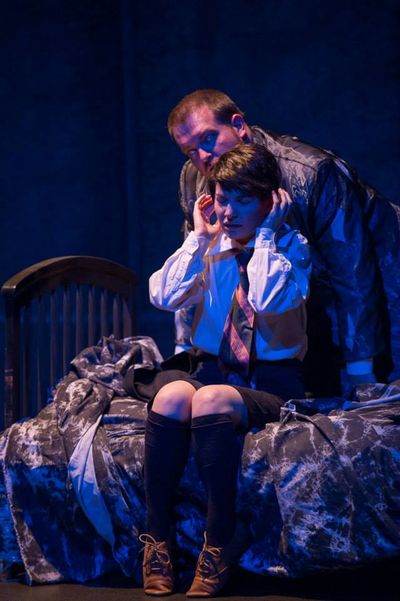 After their fashion, the tenor roles Britten wrote for companion Peter Pears make demands on the singer as idiosyncratic as the Wagnerian heldentenor parts, and not every tenor adapts to them creditably. In the Pearsian dual role of the Prologue and Peter Quint, Clay Hilley was more than creditable, wittily spooky and poignantly heartsick by turns as the ghostly valet, more misunderstood perhaps than actually wicked. As young Miles, the object of Quint's attention in the living world, soprano Ariel Downs strikes the right balance of charm, boyishness, and ambiguously implied decadence, particularly in the "Malo" song and the spine-tingle conclusion of Act I. (Ms. Downing is making a small specialty of playing young boys, having also done so in The Industry's "(First Take)" program last summer.)

Rebecca Sjöwall portrays the beset and possibly unhinging Governess with the necessary blend of earnestness, resolve and stark panic, particularly in the pinpoint shift from triumph to utter despair in the opera's final crisis. Mrs. Grose (Jennifer Wallace), the housekeeper whose opinions of the departed Quint set the Governess's concerns racing, is more fully characterized and less of a cipher here than is often the case, each turn of her well meaning confusion projected with clarity. Marina Harris is the appropriately moody Miss Jessel, no happier in death than she seems to have been in life, and Katy Tang completes the ensemble as the alternatively sparkly and sullen Flora.

With The Turn of the Screw, POP seals its place as a welcome addition to Los Angeles-area music community, reaffirming that "size isn't everything" and that it deserves to be judged as a peer alongside larger and longer established groups. The committed effort and inventiveness invested by all concerned in this production returns ample and lingering musical and dramatic satisfaction. Wider attention should be paid to POP and these performers in future.

The remaining performances of The Turn of the Screw are scheduled for the evenings of January 17 and 18, with a matinee to close out the run on January 19. Tickets [if they have not yet sold out] can be sought out here. 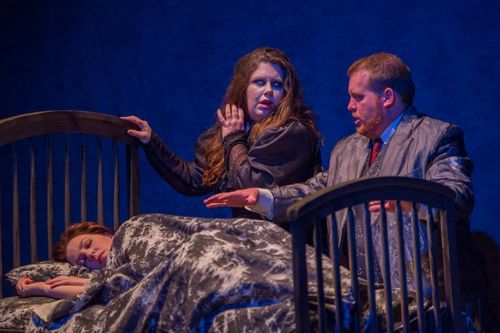 Disclosures: Jennifer Wallace (Mrs. Grose) is, as the reader may have guessed, the blogger's sister. Every effort has been bent to maintaining objectivity notwithstanding the compelling fact of consanguinity. The blogger attended this performance as a paying customer, at his own expense. The first person singular and the active voice will be reassumed by the blogger in due time.