Home Archives Profile Subscribe
Beset
The Map of the Clock

A View to Achille
[The Death of Klinghoffer, Long Beach Opera] 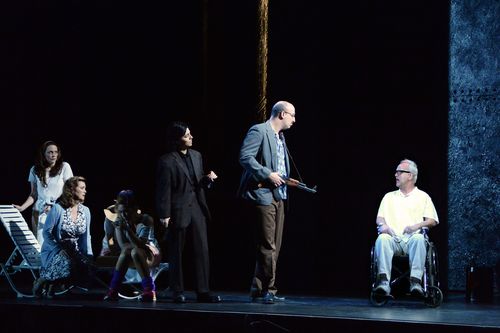 Controversy is a distorting lens. To the degree that a creative work becomes known as "controversial," it is that much more difficult to see and assess the actual work. That there was a riot (they say) at the premiere of Le Sacre du Printemps tells us little or nothing about the Sacre, or how we should value it. That a given artist's work was caught up in the U.S. "culture wars" of the 1980s reflects neither well nor poorly on the quality of the art: the controversy swept up art both good (Mapplethorpe) and less good (Serrano, in the view of this blogger), without distinguishing between or caring to address those qualities.

There is one more performance, this coming Saturday. 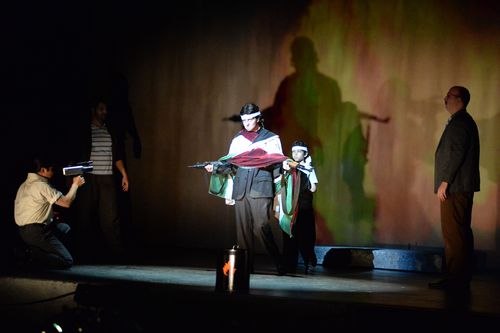 Part opera, part oratorio, The Death of Klinghoffer meditates upon the events of October, 1985, when four members of the Palestine Liberation Front hijacked the Italian cruise ship Achille Lauro in the Mediterranean, holding crew and passengers hostage for several days while attempting to negotiate for the release of Paletinian prisoners held by Israel. On the second day, the hijackers shot and killed 69-year old Leon Klinghoffer, a Jewish American retiree on a late-life vacation with his wife. His body and wheelchair were both thrown overboard. Those are pearls that were his eyes.

Alice Goodman's libretto touches on these events—with an added overlay focusing on the ship's Captain and his efforts by calm and by focus to resolve the situation without loss to crew or crowd—and wraps them in a series of grand choruses, the massed singers voicing the hopes and angers and faiths and rages of Israel and Palestine. Indeed almost twenty minutes are consumed, before the plot per se begins, with the paired "Chorus of Exiled Palestinians" and "Chorus of Exiled Jews." The choruses are underlain with some of the most elaborately fine and varied music of Adams's extensive career; the "Night Chorus" that ends Act One shares a clear lineage with the great John Donne setting "Batter My Heart" that is the highlight of the later Doctor Atomic.

It is Goodman's libretto that has been the flash point for "controversy" surrounding Klinghoffer, criticized as unbalanced in favor of the Palestinians and insufficiently critical of the hijackers' actions. The opera premiered a mere five years after the events it portrays, so that the wounds specific to the Achille Lauro incident were more raw than they are today. That the hijackers of 1985 utilized menace and violence as quid pro quo in pursuit of concrete demands (the release of prisoners) feels almost quaint or old-fashioned now, in an era in which death—whether by suicide bomb or transit station attack or the large-scale horror of September 11—seems more commonly wielded for its own sake.  In any case, Klinghoffer avoids taking particular sides on the political issues, electing instead to simply present them: reportage prevails over advocacy. The opera certainly does not endorse the hijacking itself or attempt to justify the murder of Leon Klinghoffer: even if the hijackers' cause is accepted as just, it is plain that their self-perceived righteousness and zeal has made monsters of them. There is an implicit pacifism lying beneath the entire drama, a rejection of violence as an acceptable method in support of any cause, noble or ignoble. The figure of the Captain, in fact, in his unsatisfying effort to extricate his ship from danger by logic and moral suasion, echoes a figure in an earlier pacifist work, another well-meaning commander who cannot stop death and injustice: Britten's Captain Vere in Billy Budd. 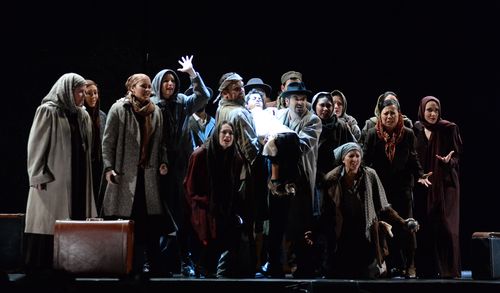 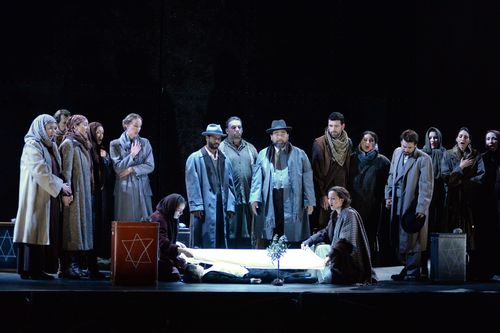 In an atypical move for a company that generally goes its own way, LBO has imported the production of Klinghoffer helmed by James Robinson in 2011 for Opera Theatre of St. Louis. This was the first new fully staged production in this country in nearly twenty years, since the last performance of the original Peter Sellars version of the piece. A group of imposing panels echoing the hull of the ship slide and turn as the principal elements of the set. A screen rises and falls bearing projections of sea, sand and, most memorably, the empty wheelchair of Leon Klinghoffer sinking into the depths, spinning slowly slowly as it goes. The wheelchair figures as well in a startling, too-brief effect in the seconds before the opera begins.

Klinghoffer has been preceded in Long Beach in earlier seasons by two other notable post-Minimal operas: Adams's Nixon in China and Philip Glass's Akhnaten.In all three, substantial musical and dramatic weight must be borne the Chorus. As in those prior productions, the Chorus in Klinghoffer Impresses out of proportion to its size, negotiating a complex musical rhetoric with variety and point.

As the earnest but ultimately ineffectual Captain, Lee Gregory exhibits dignity, fine posture, and gravitas, especially when obliged to convey to Marilyn Klinghoffer after the hijackers' departure the admission that her husband has been murdered. Three subsidiary passengers—a Swiss grandmother, a haughty Austrian surviving on the fruit basket in her cabin and dismissing the "idiots" around her, and a dancing girl who thinks one of the attackers was really a bit of a gentleman about it—are all sung by Danielle Marcelle Bond. These characters seem an odd stab at comic relief in a piece that is otherwise relentlessly dour and serious. Ms. Bond individualizes each of them, making the most of the awkward material she has been dealt. 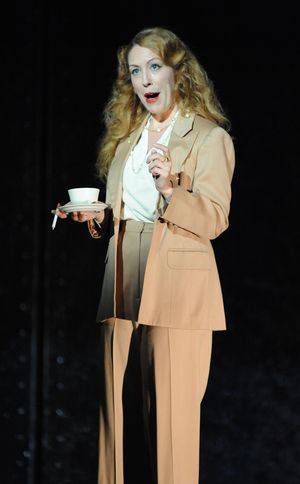 Of the four hijackers, two stand out. The leader of the group, Mamoud, is sung by Jason Switzer. Although the actual hijackers were men in their 20s, Mr Switzer's Mamoud is older, more thoughtful perhaps, committed to his cause but troubled and flustered when the plan is not so easily carried off as it might be. The role of Omar, written for mezzo soprano, falls to Peabody Southwell. Omar has one furious monologue, a slow burning declaration of ruthlessness that here evolves into the videotaping of a propaganda piece—modeled at least partly on contemporary "martyrdom videos"—Omar smoldering on the verge of explosion, wrapped in a Palestinian flag.

Robin Buck and Suzan Hanson bring to their interactions as the Klinghoffers the same sincere regard and fathomless affection that marked their performances as another longtime married couple in The Man Who Mistook His Wife for a Hat. Each of the Klinghoffers is granted two arias: Leon Klinghoffer pivots from a praise of their comfortable normalcy to a stern confrontation with his captors before being wheeled below where he will be killed, and is granted an apotheosis of sorts in the "Aria of the Falling Body"; Marilyn Klinghoffer sings of her closeness with Leon, their lives together, and the pains and fear with which she is afflicted, and is given the opera's final word, lashing out at the Captain for "welcoming" the men who killed her husband and at the world at large for having done too little to save him, ending in the wish that she should have been the one to have died. In Mr. Buck's hands, Leon Klinghoffer is a humane and decent man, and his offstage death all the more pointless and moving for it. Ms. Hanson's Marilyn is heartbreakingly exposed, her roar of grief and rage never to be answered and ultimately unanswerable. 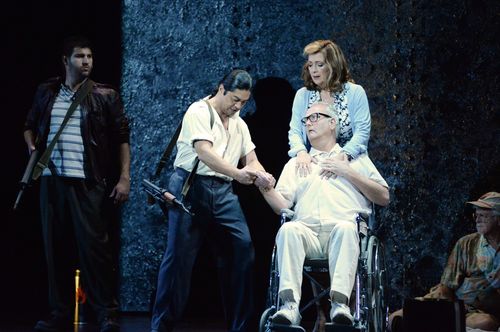 Tickets are available for the remaining performance, on Saturday, March 22, at 2:00 p.m., in the Terrace Theater, Long Beach. 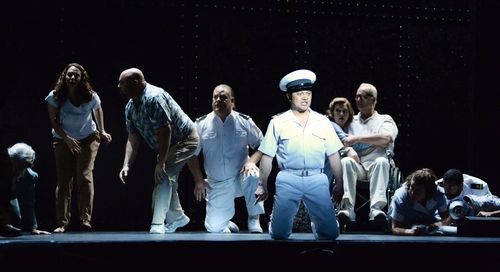