Home Archives Profile Subscribe
The Map of the Clock
High on a Hill in El Dorado
[Gabriel Kahane: The Ambassador]

Nothing Is As It Disappears 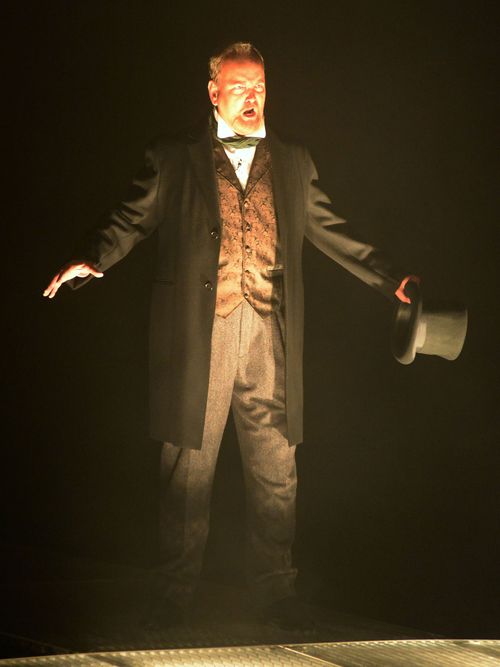 Long Beach Opera is not a company that regularly revives past productions, but it is currently making an exception with a return of David Lang's The Difficulty of Crossing a Field, which it originally staged in 2011. At that time, I foamed and raved more than somewhat in my enthusiasm for the piece and the performance. Revisiting it again this past weekend, I found it to be if anything even more impressive than it had been three years ago.

Below is a revised edition of what I wrote in 2011, with deletions, elisions, corrections, and additions as seem appropriate. There are only two more performances, for which tickets are (as it were) Difficult to obtain, but well worth the attempt. 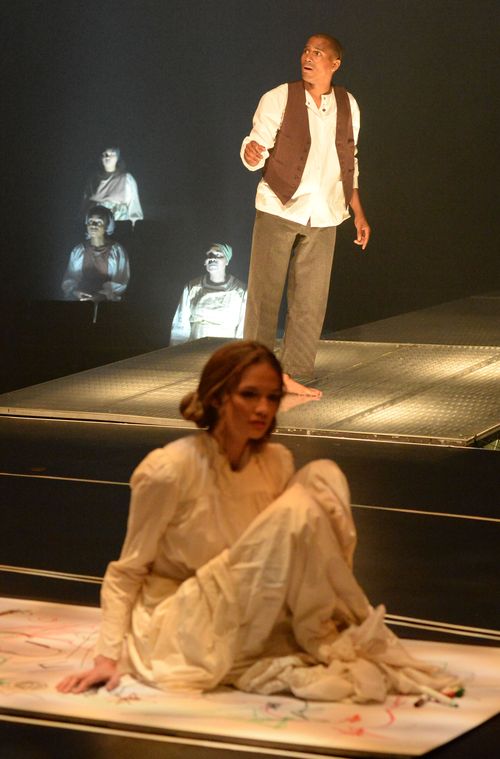 For those few who will have the opportunity to see it, Long Beach Opera’s southern California premiere staging of The Difficulty of Crossing a Field should stand, easily, as one of the most singularly compelling musical or dramatic productions to be offered in these parts this year. Or perhaps I should say that it will stand uneasily, because unease and uncertainty, the unresolvable conjoined with the unmentionable, lie at its heart.

Difficulty hangs on the slimmest of narrative threads, a 750-word story by Ambrose Bierce in which Mr. Williamson, a plantation owner in 1854 near Selma, Alabama, one day sets out to walk across one of his fields to deliver an instruction and, in plain view of witnesses, disappears. The witnesses are astonished; Williamson’s wife loses her wits, either on the spot or shortly after. There is an inquiry by the law.  Bierce gives the oddly redacted testimony of Williamson’s neighbor, Mr. Wren, and attorney readers in particular will appreciate Bierce’s way with the shaky reliability of eyewitnesses.  Bierce reports flatly in his final sentence that Williamson was declared dead, his property distributed according to law. What has happened is never explained: “It is not the purpose of this narrative,” Bierce writes midway, “to answer that question.”

The stage version originated as a commission from San Francisco’s American Conservatory Theater, and premiered in a small alternative space in San Francisco in 2002. The music is by David Lang, one third of New York's Bang on a Can and recent Pulitzer Prize winner for The Little Match Girl Passion

.  The text is by playwright Mac Wellman. Between them, Lang and Wellman collect the cryptic fragments of Mr. Williamson’s disappearance and spin them into something even more cryptic. In a pre-performance talk [in 2011], David Lang noted that Wellman’s libretto includes at least once every word in Bierce’s original.  Wellman’s most critical contribution is to give voice to those whose testimony is pointedly not sought out or considered to be of interest in Bierce’s story: Williamson’s young daughter (a babe in arms in the tale, a soprano here), the now-disturbed Mrs. Williamson and, above all, Mr. Wren’s house slave Boy Sam and Mr. Williamson’s own field slaves. Bierce, again:

David Lang scored the piece for string quartet, specifically the Kronos Quartet in the original production. (In Long Beach, the score receives a highly capable and sympathetic treatment at the hands of the Lyris Quartet, conducted [in 2011] by Benjamin Makino [and in this revival by Kristof Van Grysperre].) The music is rooted in contemporary minimalism, with discrete melodic shards repeating in shifting relation to one another. Like that of Philip Glass, Lang's minimalist method is remarkably fluid, and able to shift instantly from jittery nervousness to chanting mysticism to lyrical melanchol. It melds well with the parallel technique of Wellman's text, in which key phrases recur and recur, their seeming significance altered by the other phrases that move around them. "We are constructing a nation," the field slaves sing early on; moments later, the phrase has become more ominous: "We are constructing an erasure." 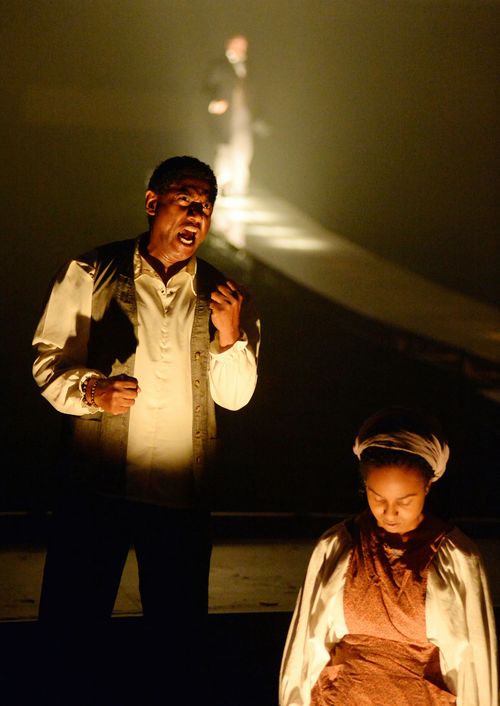 For once not wielding the conductor's baton, Long Beach Opera Artistic Director Andreas Mitisek has designed and directed a production that brings out all the ineffable mystery Difficulty carries about its person. * * * [T]he audience is seated on the stage [of Long Beach's Terrace Theater] and the performance takes place on the segmented elevator in the orchestra pit, and within the dim and cavernous space beyond.  A long ramp, illuminated from below, runs out into the house, and it is along that ramp that Mr. Williamson disappears. The investigating magistrate, bat-like shadows behind him, presides over his inquiry from the upper balcony. The rows of theater seats echo the rows of crops that are tended by the field slaves, who approach through mist out of the darkness to share their piece of the mystery. Mitisek has made a habit of staging opera in unusual spaces, or of using the available space in unexpected ways; this [was and remains perhaps] his neatest scenic conceit [ever]. 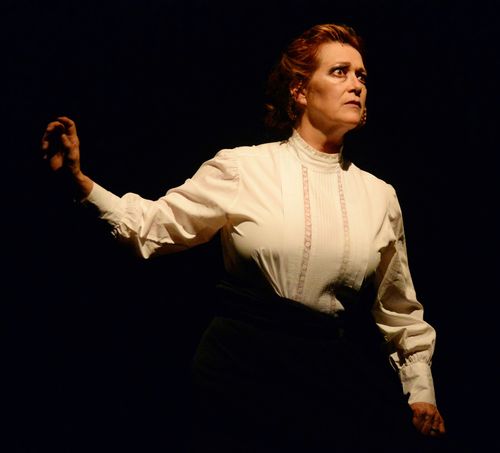 The cast is uniformly impressive. Suzan Hanson * * * is mad again as Mrs. Williamson. She is perched high atop a stool or ladder, rising and descending in the pit, her enormous skirts spreading out over the ground around her as she tries to grasp what has happened to all she once took for granted. Mrs. Williamson's music is the most "operatic" in the piece, and Hanson's rich and subtle soprano (and her rich and subtle dramatic chops) entrance as they disturb. As the young Williamson girl, Valerie Vinzant spends her time on the floor drawing and recalling the last thing her father said to her—"What is the point of talking crap like that?"—in response to her Cassandra-like suggestion that the horses know something important and must be understood. Lang has given the character music as lovely as anything in the piece, and Vinzant sings it rivetingly. 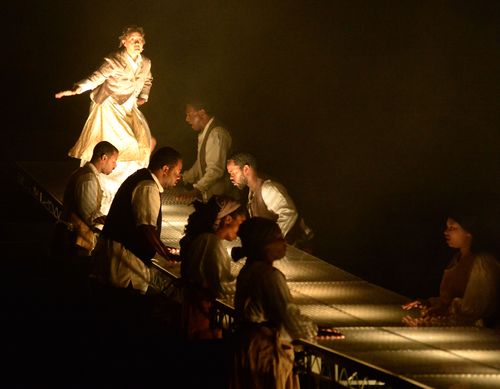 The field slaves are central to Difficulty and the [mostly new nine]-member ensemble gathered in Long Beach is a powerful one[, particularly Karole Foreman as the woman known as Virginia Creeper, the slaves' ritual centerpoint, and Michael Paul Smith as the unnamed field hand obliged to recite his masters' rules and regulations.] As [the house slave] Boy Sam, Eric B. Anthony impresses with an eery high tenor, unsure what he has seen and whether he should share it (as if the whites would even listen if he did).

Robin Buck * * * returns in the mostly-speaking roles of Mr. Wren and of Williamson's brother/overseer, through whom we learn that Williamson favored the unyieldingly harsh philosophies of John C. Calhoun in the "management" of his slave population. In separate scenes, each of Buck's characters provides testimony contradictory of the other, neither getting any grip on what may have occurred. 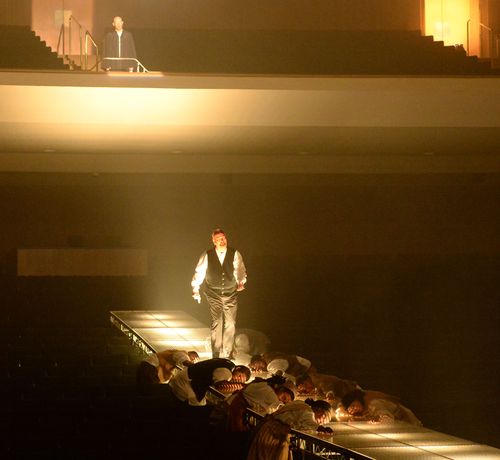 Mr. Williamson himself, and the investigating magistrate, both non-singing roles, are played by Long Beach stalwart Mark Bringelson. Stern, humorless and puritanical as the magistrate, grotesque in the manner of little men with undeserved power as Williamson, Bringelson is a compelling pivot round whom the other characters' plans and reactions turn. Moreover, he brings a surprising grace to his character's actual disappearance, giving away nothing while becoming nothing.

So what, we ask, has actually happened? Did Mr. Williamson light out for the territory? Was he swallowed by a particularly subtle and efficient sinkhole? Beamed up by aliens? Is he the Don Giovanni of Selma, Alabama, hauled away in a trice to pay for his sins? None can say. These are [among] the Mysteries of Selma, Alabama.

Photos by Keith Ian Polakoff, from the 2014 production; used by kind permission of Long Beach Opera.