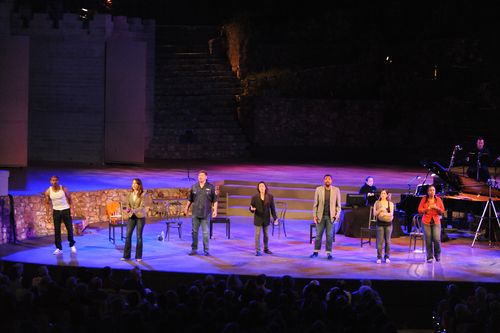 Timing is everything. On Saturday evening, Long Beach Opera staged the long-delayed Los Angeles premiere of John Adams' I was looking at the ceiling and then I saw the sky, and the concatenation of that piece's concerns with contemporaneous events lent to it a weight and complexity that, frankly, it likely does not warrant on its own merits.

Ceiling/Sky, as it is often known, was created by Adams in collaboration with poet-activist June Jordan under the auspices of director Peter Sellars, which whom the composer had worked closely in the creation and staging of his earlier operas, Nixon in China and The Death of Klinghoffer (both of which Long Beach Opera has performed in recent years). As with the operas, the piece takes a current event as its starting point. Premiering in Berkeley in 1995, Ceiling/Sky turns on the Northridge earthquake that thundered beneath the Los Angeles area the previous year.

Ceiling/Sky is not actually about the earthquake, which does not even occur until nearly two thirds of the way through the piece. When the seismic shift finally puts in its appearance, it serves as little more than a random opportunity for personal growth on the part of the story's seven characters, who by that point are as intertwined as they are ill defined. 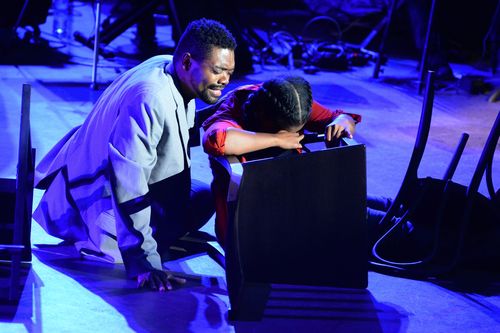 The dramatic frame of Ceiling/Sky is one that is by now familiar from a certain type of very serious and earnest film and television drama: a group of characters, each defined principally by ethnicity or gender or political affiliation and otherwise bearing little in the way of individual personality, are brought together through the altogether random intersection of their life paths. Here, a "young black man" named Dewain, with a history of run-ins with law enforcement, shoplifts two bottles of beer while enroute to see Consuelo, the undocumented Salvadoran refugee with whom he has fathered a seven-month old child. Dewain is arrested by Mike, an LAPD officer on patrol in the company of Tiffany, a television journalist who takes more than professional interest in his person. Facing a "third strike" that will send him to prison for most of his life, Dewain is represented by public defender Rick, the U.S.-born son of Vietnamese refugees. Consuelo has been receiving birth control advice from community activist Leila, who in turn is romantically enmeshed with David, a charismatic, if philandering, inner city preacher. There is then an earthquake. Lives are changed, deep realizations are realized—Mike the cop acknowledges and embraces his gay identity, for example, and Consuelo elects to return to political engagement in El Salvador. The story ends with the characters' life paths re-forking in their separate new found directions.

Twenty years on, the details have changed but the political and societal concerns at play in Ceiling/Sky remain sadly unresolved. The fraught potential of encounters between white law enforcement and young black men has been driven home again by the killing of Michael Brown in Ferguson, Missouri. Young Central Americans continue to cross the U.S. border fleeing criminal or government violence in their homelands. Even the earthquake itself became suddenly topical again when the town of Napa and surounding wine country were struck with a 6.0 shock within hours after Saturday's performance. Relevance and progressive politics, however, do not in themselves create credible theater. Ceiling/Sky ultimately fails as persuasive drama because its characters are barely more than stick figures bearing their identities as placards. Politically informed drama is hard to pull off, the weight of symbolism and rhetorical point tending to pull away from the compelling portrayal of actual humans. June Jordan did not navigate those hazards with nearly the success that was achieved by Alice Goodman in her (imperfect, but nevertheless more successful) libretti for Nixon and Klinghoffer.

John Adams' score, on the other hand, is peculiarly compelling. Adams calls the piece a "song play," which could be taken as a literal translation of the German singspiel, i.e., the mix of high and low music theater traditions that yielded up Magic Flute. The magic and spectacle of Mozart are not on display in Ceiling/Sky, but the coupling of music hall, dance hall, and concert hall traditions certainly is. The 20 songs that tell the story swing and shuffle, groove and grind, with neominimalist pulse and drone as their dates for the evening, a pleasingly heady and singspielische mix of street and nonstreet strains. The reliance on electronic keyboards is occasionally too period-specific, verging on the cheesy, but not to such an extent as to undercut the entirety of the score.

Long Beach Opera artistic director Andreas Mitisek conducted the ensemble with exemplary skill, and the ensemble responded with what seemed to be as compelling an account of the score as could be wished. The performances of musicians and singing actors were across the board entirely compelling: better, really, than the piece itself. In a world full of mediocre accounts of great works, it was refreshing to encounter a strong and committed account of a less-than-great one. 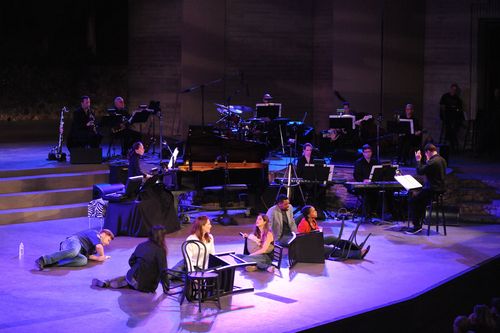 I was looking at the ceiling and then I saw the sky was a one-off performance, under the auspices of Los Angeles County's Ford Theatres. Which is to say, if you weren't there you won't be given another opportunity.