Home Archives Profile Subscribe
And Next, an Annex [with annual Favorite Music Lists]
Antoinette of the Spirits, or, The Beaumarchais Strategem
[The Ghosts of Versailles, Los Angeles Opera] 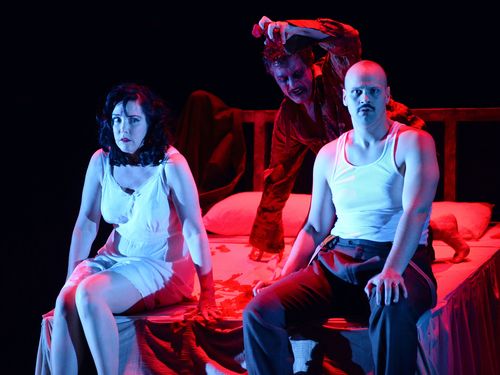 Émile Zola's Thérèse Raquin (1867) is lurid, unrepentantly tawdry, and a potboiler at its core, with all the lust, loathing, murder, desperation, and squalor that implies. It's trappings even include the visitations of an aggrieved and vengeful ghost. It would seem the sort of story destined from birth to find a place in the opera repertoire, and in 2001 composer Tobias Picker gave it one. Originally commissioned by Dallas Opera, and staged by San Diego Opera in 2008, on Saturday evening Picker's Thérèse Raquin opened the 2015 Long Beach Opera season.

Zola offered his story as a realistic chronicle of squalid conditions and miserable lives in the Paris of his own moment. Director Ken Cazan maintains the Parisian locale, but moves the action forward some eighty years, to 1945-46 as the city, with the rest of Europe, struggles back to life from war and occupation. As conceit go it is a good conceit, and the mid-century look of the production also quietly evokes an American literary parallel: the novels of James M. Cain in which, as in Zola, characters are ground down by their own mistakes or, as commonly, by societal and family conditions they did not make, cannot control, and seem barely to understand. 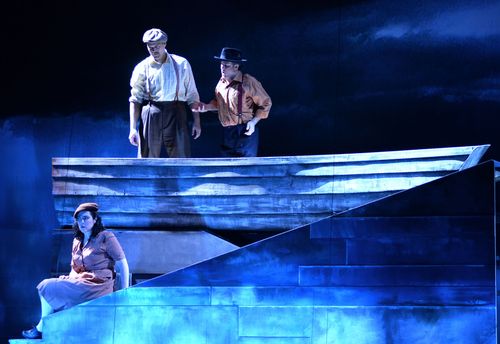 Zola's tale is pitiless: Thérèse was left at the age of three to be raised by her aunt, the widowed Madame Raquin, whose life is otherwise devoted to ruling over her sickly son, Thérèse's cousin, Camille. It is foreordained that the cousins should marry. They do, and continue to live in the Raquin flat, where Thursday dominoes with the neighbors are the only unvarying variance in a dismal routine. Thérèse falls in with Camille's raffish office mate, the aspiring "painter" Laurent. Camille, inevitably, is murdered by the lovers: drowned in a boating excursion on the Seine. Laurent and Thérèse, still living off of Madame Raquin's widow's pension, marry and fall swiftly into debilitating mutual loathing and regret. Camille's ghost—given here an unforeseen Act II entrance worthy of Freddie Krueger—perturbs them mightily. At length, just as they are inclining to kill one another, they instead kill themselves. Tres jolie, non?

Gene Scheer is the librettist, and he has provided a clean, efficient tour through the necessary events of the tale. The libretto is structurally sound as can be, but Scheer has chosen, inexplicably and with surprising frequency, to set much of the dialogue as loose-limbed rhymed couplets. While Picker typically avoids lapsing into sing-song to accommodate the rhymes (except when some of the supporting characters are actually supposed to be singing wedding-night doggerel), the too-obvious rhyme frequently threatens to undercut the seriousness of the characters' situation. 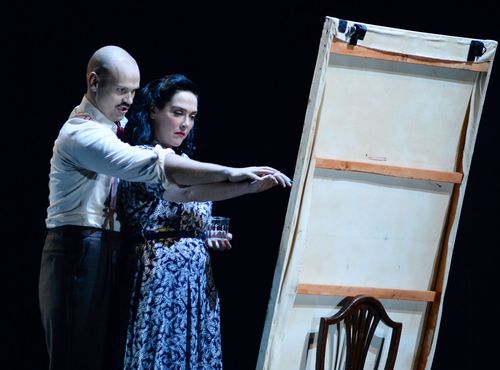 Picker's score is also a clean and efficient thing, amply allusive without lowering itself to pastiche. Act 1, in particular, revels in evocations of Debussy and Ravel—Laurent's seductive anecdote of being "persuaded" to include a comely young woman in one of his pictures is a veritable  après-midi d'un  flâneur. The second act, post-murder, grows more angular, highlighted by Camille's "ghost aria," which borrows effectively from the bottomless melancholy of Peter Quint in Britten's The Turn of the Screw. If it is not pioneering, the music is rarely less than an effective carrier of the drama.

The cast in this production, the majority in their first appearance with Long Beach Opera, are solid as can be. As a character, Thérèse poses the challenge of being far more acted upon than active; Mary Ann Stewart is amply sympathetic against the odds, grasping for a personal freedom she can barely imagine. As Camille, Matthew DiBattista effectively contrasts an ineffectual lumpishness against a bitter last fight against death and, finally, an urgent and physical grotesquerie from beyond the grave in the showpiece ghost aria. Ed Parks's Laurent is less clever than he imagines himself, casually unfeeling when he imagines he is being most sincere; not a bad man, but a man who makes very poor choices.

Suzan Hanson captures the misguided strictness of Madame Raquin, who never acknowledges her smothering effect on those around her. When her character falls silent, victim of a stroke induced by the discovery of Laurent and Thérèse's guilt (and a brutal confrontation with Laurent), she serves as silent foil to the guilty and to the oblivious as the drama snakes to its end. 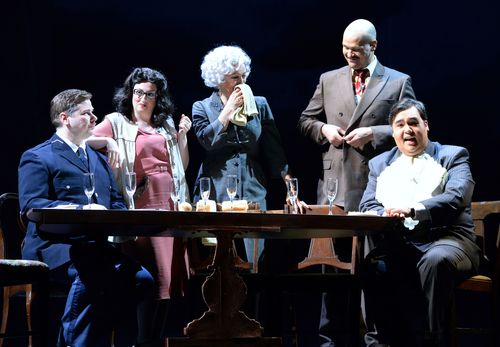 To their credit, Picker and Sheer have taken the supporting parts of the neighbors seriously, giving a fair portion of humanity to parts that could have been caricatures. Zeffin Quinn Hollis is the good natured gendarme Olivier, unable even to suspect the guilt of the killers, with Ani Maldjian as his touchingly rootless spouse. John Matthew Myers is the much-married, jovially clueless Monsieur Grivet.

All told Thérèse Raquin works well as an opera. If it's path through desperation and folly to death and confusion is not new, it is certainly well retold. As Bugs Bunny famously observed, "Whaddaya expect from an opera? A happy ending?" To which one can only reply in this case: Non, je ne regrette rien. 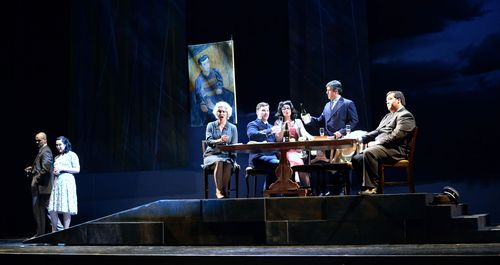