Antoinette of the Spirits, or, The Beaumarchais Strategem
[The Ghosts of Versailles, Los Angeles Opera]

A magpie's trove in a hall of mirrors, its shiny borrowings gleaned across space and time and worlds natural and supernatural: John Corigliano's The Ghosts of Versailles is now on offer as part of Los Angeles Opera's sprawling "Figaro Unbound" initiative, with two performances remaining. It is a rewarding thing to commune with these spirits.

New York's Metropolitan Opera commissioned Ghosts to be premiered in 1983, for the company's 100th Anniversary. In light of the occasion, it was to serve not only as an opera in its own right, but also as a gala opportunity to showcase a number of the Met's then-reigning and rising stars. The enormity of the resulting piece was such that the Met itself has yet to revisit it—a planned 2010 revival was scrapped when the U.S. economy went reeling downward—and such other productions as have been attempted (in Chicago and St. Louis) have been of reduced or chamber versions. The current production in Los Angeles is the first to take on the complete version since its premiere.

The institutional neglect of these Ghosts is unfortunate because Corigliano, with a meticulous tightrope-walk of a libretto by William M. Hoffman, devised a piece that can stand solidly as an opera, as a love letter to all opera, as a spectacle, and as emotionally resonant theater. Ghost story, opera buffa, love story, melodrama, pageant and more: Ghosts is a bumblebee, a creature that should not fly but does, an edifice that should collapse of its own weight and yet floats off to the Empyrean when all's said, as lightly as a Montgolfier balloon (the concluding image in this production).

The plot? It's complicated, even by 18th century opera standards: 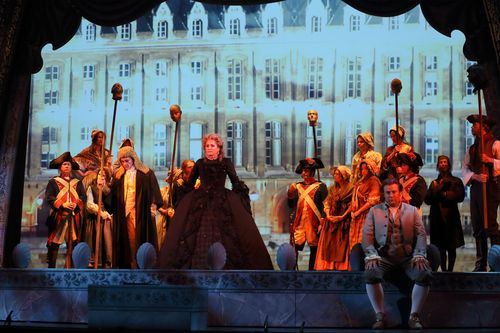 The audience in the material world is made privy to events in the spirit world, possibly going on at this moment. The ghosts of Louis XVI, Marie Antoinette, and others of the French court, executed by the Revolution, languish and are bored. With them is the ghost of the equally dead, but not beheaded, Beaumarchais, the author of the Figaro plays, the two most popular of which—The Barber of Seville and The Marriage of Figaro—served Rossini and Mozart as fodder for equally popular operas, which will themselves be returning to the L.A. Opera stage in short order.

For the love of the mournful Marie Antoinette, Beaumarchais grandly proposes an entertainment, a new recounting of further adventures of the beloved Figaro and company.  By this means, the poet announces, he will do more than merely amuse. He proposes in fact to Change the Course of History and to permit the Queen, whom he loves, to escape her rendezvous with the guillotine. The living audience watches the dead audience watching fictional characters tampering with actual history in an opera within the opera. 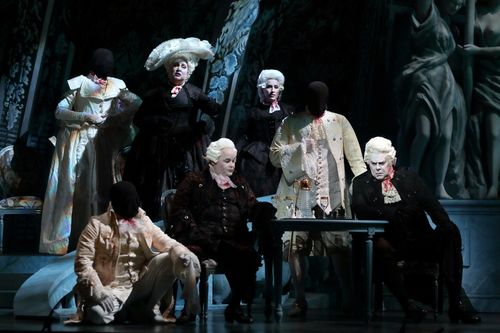 On the inner stage, it is some twenty years after Figaro's Marriage. Figaro, it seems, continues to serve Count Almaviva. The Count is engaged in a Pimpernel-like scheme in which a fabulous diamond necklace of the Queen's will be sold in secret to the English ambassador to Paris, during a reception at the Turkish embassy. The proceeds of the transaction will fund the Queen's rescue from imprisonment and her escape to the New World, specifically to Philadelphia. Meanwhile, Almaviva's trusted friend Begearss—in fact an unrepentant villain in the tradition of Iago—awaits his chance to betray the Count into the lethal hands of the Revolution. And, of course, there are marriages to be arranged or thwarted.

All goes as planned until Figaro, having snapped up the necklace during the  hubbub of the Turkish revels, rebels against his creator and refuses to use the jewels as intended to save the Queen. He will keep them for his own, to deal with his innumerable creditors. He has achieved Pirandellian self-awareness. He knows he is a beloved character—"Your Figaro!"—and that this is what his audience would expect of him and what he himself desires.

Outraged, Beaumarchais is obliged to invade his own fiction in an effort to reassert his authorial will. Ultimately, in an effort to persuade Figaro to return to course, Beaumarchais restages the trial of the Queen. Figaro relents, the dreadful Begearss receives his comeuppance, and all of the fictional characters are saved. The real/ghost Queen, however, elects not to change her own past. She finds that she is reconciled to history, and in the company of the loving Beaumarchais she achieves a sort of apotheosis.

Beaumarchais's proposition proves to be the same as Shakespeare's in the sonnets: that the love of a poet or artist may grant to the beloved, through art, a sort of immortality when life itself cannot. It is, perhaps, the only immortality there can be for such fleeting creatures as humans are. 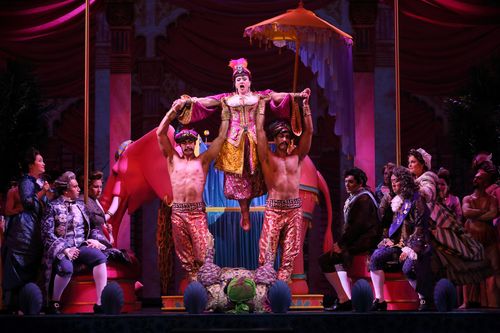 This new Los Angeles production is directed by Darko Tresnjak, whose previous work with Los Angeles Opera has been as part of the "Recovered Voices" project, including Alexander Zemlinsky's marvelous, heartbreaking The Dwarf.   To the larger world, he may be better known as the recent Tony Award winner for directing The Gentleman's Guide to Love and Murder. Tresnjak's management of stage traffic alone is an impressive thing, given the multiple stages, nesting plots and large-scale set pieces Ghosts requires. The sets are looming and luxuriant, the costumes sumptuous, the spectacle fully spectacular. Ghosts is a madly overstuffed thing, scintillant of surface but secreting resonant emotional depths. Its every corner packed with detail, it resembles in many ways Terry Gilliam's Baron Munchhausen, not least in its pitting of love and the spinning of upwardly yearning yarns against political calculation and callous destructiveness. (That, and they both feature heads floating about independent of their bodies. But I digress.) 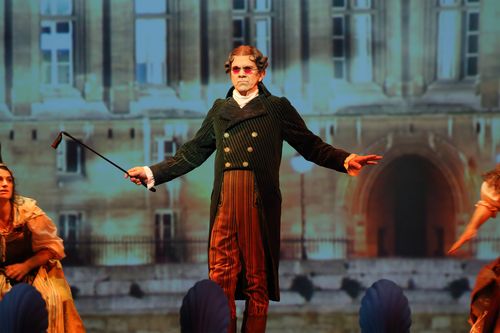 Among the singers, Robert Brubaker as the reprehensible Begearss is a highlight, earning a round of affectionate booing in his curtain call. In his company debut, Christopher Maltman brings dignity and scope to bear on behalf of Beaumarchais. Patricia Racette as Marie Antoinette, is noble and sad. The show-stopping cameo role of the Turkish singer Samira, written for Marilyn Horne, is taken up with infectious glee by Patti Lupone, her Broadway chops in full effect, ululating and schticking it up uproariously in the mad comic finale of Act I.

The Ghosts of Versailles is not what Wagner had in mind when he imagined the "total work of art" [gesamtkunstwerk], but in this production it arguably qualifies: music, poetry, theatrical wizardry, all brought to bear in a consuming whole. Its satisfactions are many, and they linger—hauntingly—long after the curtain falls and the auditorium is emptied of the living. 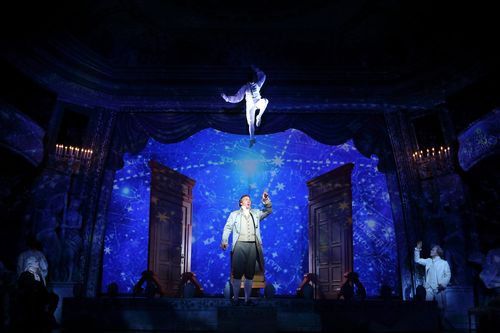 O! Citizens. The Lunatic Overstuffed Brilliance of @LAOpera's "Ghosts of Versailles" [Act I at least] Must Be Seen By You. A finest madness.

The hour late, the revels ended, approbations galore to everyone concerned with @LAOpera's "Ghosts of Versailles". You made it new anew.

Between @LongBeachOpera, @LAOpera, @industryopera, @LAPhil and more, Los Angeles is a total hotbed of *Opera by Living Composers* just now.

The Ghosts of Versailles continues at the Dorothy Chandler Pavilion, with performances February 26 and March 1.

The blogger attended this performance as a Los Angeles Opera subscriber.