Home Archives Profile Subscribe
Antoinette of the Spirits, or, The Beaumarchais Strategem
[The Ghosts of Versailles, Los Angeles Opera]
John Adams and the New Power Generation 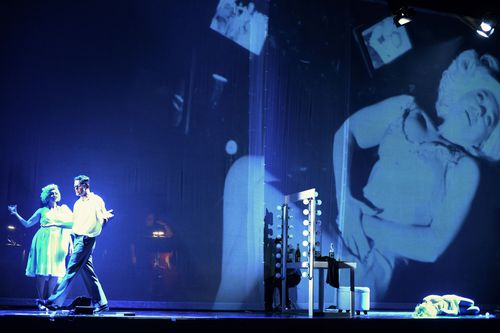 Marilyn Forever, composed by Gavin Bryars on a libretto by Marilyn Bowering, received its U.S. premiere last Saturday evening via Long Beach Opera. Whether the world in fact needed another artful meditation on the life and death of Marilyn Monroe is open to debate. It has in any case been given one. Marilyn Forever must be judged a success on its own terms, and the production that has been devised by LBO artistic director Andreas Mitisek shows it to greatest advantage, with richness and detail to burn.

Bowering has based her libretto on her 1987 poetry collection, Anyone Can See I Love You, so its methods are those of a free-form song cycle more so than of dramatic narrative. The poems frame a multiplane view of the figure of Marilyn Monroe as she contemplates or re-dreams her life at the time of her death. The well-known beats are revisited: her lonesome childhood as Norma Jean Mortenson, stardom and sex appeal, the marriages to Joe DiMaggio and (particularly) Arthur Miller, singing "Happy Birthday" to the President, her fatal embrace of drugs and alcohol, and so on. Through those reflections, Bowering searches for the woman within the archetype, and reintroduces us to her as one (to paraphrase The Smiths) who was human and who needed to be loved, just as anybody else does.

Bryars' score is for two small groups: an onstage trio of piano, saxophone and bass, and an eight-piece pit ensemble of low strings, winds and percussion. The composer himself played the bass part at Saturday's performance. The primary musical line slips with agility between the two groups of players, the trio deploying a 1950s-styled mix of jazz (saxophone solo included) and popular song styles and the pit orchestra swimming in broad and darksome minor harmonies, riverine and unresolved, melodic by allusion rather than by declaration. It is not difficult to imagine that only modest retooling would be needed to remove the singers—although Bryars has established himself as a gifted writer for human voices—and to reveal an evocative and intriguing instrumental piece. 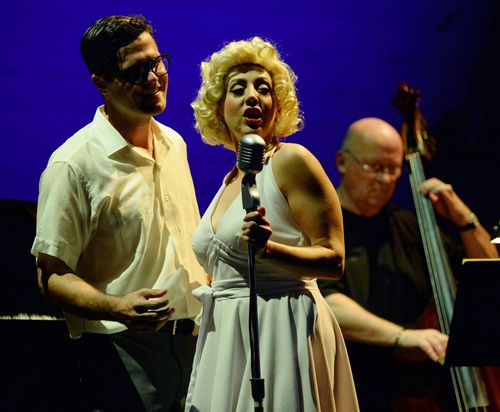 Marilyn Forever premiered in Victoria, British Columbia, in 2013, and has since been performed in Australia as part of a recent Bryars survey/tribute at the Adelaide Festival. The Long Beach production for this U.S. premiere is entirely new.

As written the opera calls for a cast of four: Marilyn Monroe herself and the "Rehearsal Director," who also serves to represent some of the men (and the role of men generally) in her life, plus a two-man chorus referred to as The Tritones. Director Mitisek's innovation is to divide the role of Marilyn between two singers, one for the brightly hued public star and one for the vexed and troubled private woman.

Mitisek splits the stage as well. A lighted makeup table serves as divider, the public life playing out largely stage right (in front of the jazz trio) while stage left alludes to the guest house bedroom in which Monroe's body was found. Public Marilyn begins the opera in her bedroom, before quickly passing over into the world. Private Marilyn emerges, rather unexpectedly, from beneath the rumpled bedclothes, and never leaves her room with its scattering of old photos and the company of a motley assortment of  flasks and bottles. At the opera's end, the two personae rejoin, seated on the bed, still alone but alone together.

Set walls and scrims serve as well as projection screens, bearing posed and candid photos of incidents from Monroe's life as well as live video from the stage. The video originates with several fixed positions, plus handheld cameras operated by the two Tritones. The video overlay is immersive and potent, especially when capturing small details from the stage and juxtaposing them to add point to a larger line or gesture. 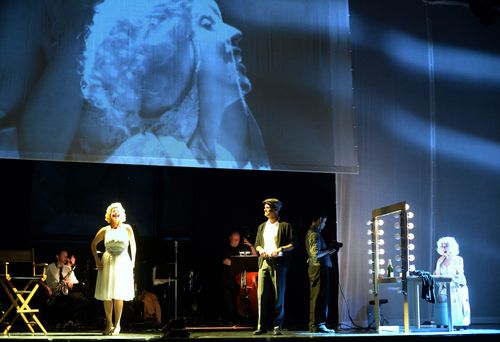 Jamie Chamberlin and Danielle Marcelle Bond are, between them, Marilyn Monroe. The division of the part between two singers works so well in this production that it came as a surprise to many in the audience that the role is not in fact written that way. Both performers initially learned the entire role, working out the final apportionment of lines and sequences through exploration in rehearsal. Chamberlin's public star sings in a high register, evoking an enriched and variegated version of Monroe's own singing voice. Portions, at least, of the vocal line assigned to Bond's private Marilyn seem to have been transposed slightly downward toward a darker mezzo range. Each of the singers fully commits to her assigned facets of the character, and each can be said to be First Marilyn Among Equals.

[Update: I have it on excellent authority - Facebook comments from the singers - that in fact nothing was transposed or altered in the score. The role of Marilyn is written such as to encompass both soprano and mezzo: the way in which the part was divided for dramatic purposes served, by happy coincidence, to play to the strengths of the two performers.]

Lee Gregory (the Captain in last season's Death of Klinghoffer) brings admirable clarity to distinguish among the half-dozen (or more) men he is called upon to symbolize, including the gruff but supportive Rehearsal Director, bespectacled and beloved Arthur Miller, and the occasional unsavory Hollywood casting couch type. The Tritones (Robert Norman, Adrian Rosales) ably provide such choral support as the score requires, and they are indispensable to the seamless workings of the video schema. 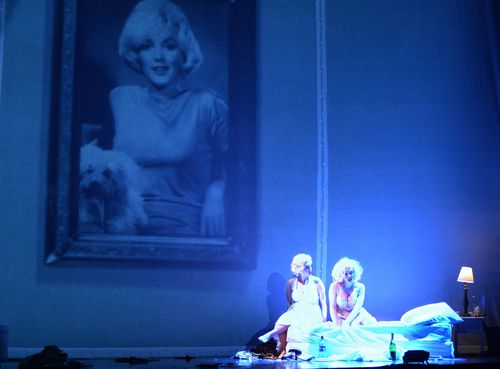 Opera often concerns itself with retelling old stories and Marilyn Forever—an unfortunate title, really, that makes a serious minded and affecting chamber opera sound like a feel-good jukebox musical—does not hold itself out as offering any new and shattering insight into its subject. That may be for the best: even before her death, and certainly in the fifty-three years since, Marilyn Monroe has been appropriated, claimed, and retooled by so many hands with so many agendas of their own that offering her up as no more than a human woman alone with herself is less a reduction than it is a show of respect. 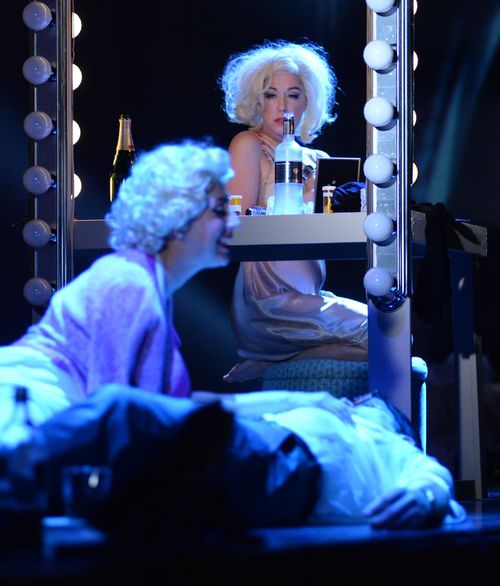 Marilyn Forever receives a final performance at the Warner Grand Theatre in San Pedro (albeit without the composer as a player) on Sunday, March 29, 2015, at 2:30 p.m. Tickets available here.

Cross-posted at Genre, I'm Only Dancing. 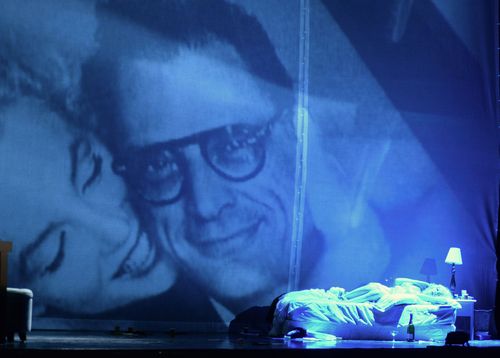 A bonus photo: the actual Marilyn, in a smoky nightclub situation in the company of Donald O'Connor and Cole Porter, at the Coconut Grove in the Ambassador Hotel, January 1953. 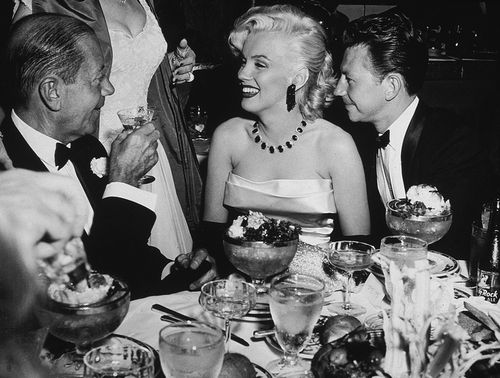