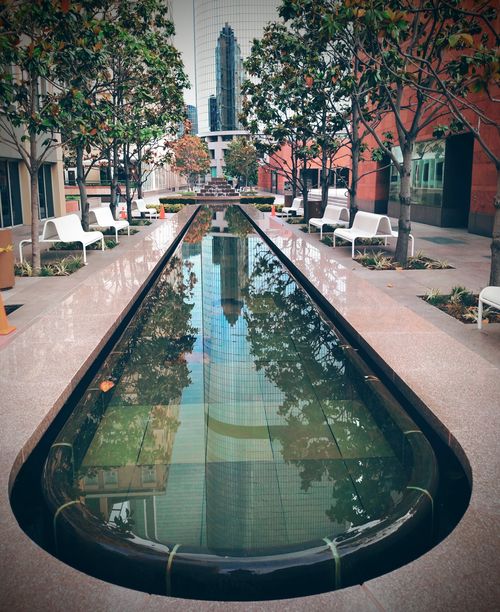 The Los Angeles Philharmonic's Next on Grand series continued Friday evening with three  ensembles—the Philharmonic under Gustavo Dudamel, Ensemble Signal led by Brad Lubman, and members of wildUp with conductor Christopher Rountree—performing, respectively, a world premiere from Steven Mackey, a revival of a turn of [this] century collaborative piece by Steve Reich and video artist Beryl Korot, and a previously unannounced al fresco percussion intervention.

Steven Mackey's "Mnemosyne's Pool" is a five part, 45-minute whats-it (something of symphony? a touch of tone poem?) for the full orchestra, and brims with cunning musical goodness. It is not literally about the Titan Mnemosyne—a goddess of memory, lover of Zeus, mother of the Muses—nor is it about a pool, but its processes toy about with the pliable, labile, multivalent twitch and flicker of memory, and much of its musical material can be heard as waterborne and maritime. The composer's detailed program notes notwithstanding, the intricacies of the structural innards of the piece were not instantly fathomable by the ear on first listen, but the larger arcs and complementary variety of the components delivered satisfactions aplenty.

In five sections, "Pool" begins with a tolling chime and funereal chords, even a whiff of dies irae, but soon spreads into the first of its more liquid segments, turbid and glinting under threatening skies. The second section was vaguely Russian or Baltic, spiky and sprightly in the vein of early Stravinsky (think Petrushka, perhaps filtered through a mesh of Carl Nielsen strings and winds). The third and fourth segments are played without break, the former harking to American urbanism, the latter transiting from stately elegy to spartan threnody. The fifth and final section returns to watery thoughts, breeze driven under a cloudless heaven, before terracing upward to an extended boom and burst of an ending. 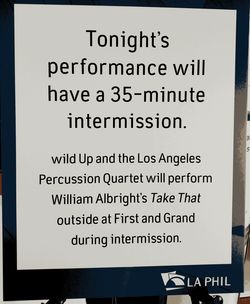 The physical arrangements for the two halves of the concert were radically different—the full orchestral setup for the Philharmonic needed to be broken down and carted off, to be replaced by Signal's string quartet at the front, double pianos and extensive percussion at the rear, separated by a U-shaped platform for five roving singers—compelling an extra-long intermission. Enter wildUp. With the Los Angeles Percussion Quartet, the ever-enterprising ensemble took to the broad empty space in front of Walt Disney Concert Hall (as well as positions across the street) to perform William Albright's 1972 "Take That" for Philharmonic attendees and passersby.

As written, "Take That" calls for four drummers managing sixteen drums. wildUp and company doubled the players and expanded the percussion battery to forty drums of all sizes, including a full dozen bass drums. With the musicians scattered over four stations around the plaza and intersection at 1st Street and Grand Avenue and a shortage of reflective surfaces, much of the sound escaped unheard up into the evening air. Still, a fine rolling and thundering was made before concertgoers returned to their places.

Steve Reich's "Three Tales" is a 2001 collaboration with video artist Beryl Korot, and falls into the category of Reich's works that are driven by the pitches and rhythms of human speech. When that technique works for Reich, as in "Different Trains," it produces profound and compelling music. When it does not work, however, the music loses its savor and interest under the dead weight of the words it tries to carry. "Three Tales," unfortunately, although performed rigorously and well by Ensemble Signal, ultimately outstayed its welcome by a fair margin, descending in its last two-thirds into a dulling and ponderous didacticism.

"Three Tales" draws on history and science, and meditates on humans, their technology, and how the two change or are changed by one another. The three events on offer are the 1937 explosion and crash of the German airship Hindenburg, the U.S. military's nuclear test detonations at Bikini Atoll in 1946, and the 1996 advent of Dolly the sheep, the world's first cloned adult mammal. The Hindenburg segment is actually successful for the most part, and Beryl Korot's video constructions are particularly well-tuned as they cross-reference the vastness of the made object and the comparative smallness of its makers.

The other two "tales" succumb to self-seriousness, particularly once passages from the creation narrative in the book of Genesis begin to be interpolated, flashing on screen in follow-the-bouncing-ball sing-along fashion. Dolly appears only briefly in her concluding segment, which is more interested in trotting out interviews with now-familiar Deep Thinkers such as Richard Dawkins and Marvin Minsky, and a disturbing baby robot named Kismet, to opine on the cybernetic, code-based nature of all earthly life. While the live singers and players were clear and well-balanced, the recorded voices of the interviewees tended to fly straight into the Disney Hall's notorious hostility to over-amplification. By that point, the video accompaniment had become little more than what Alfred Hitchcock famously disdained as "photographs of people talking." Better they should have left it at one tale. 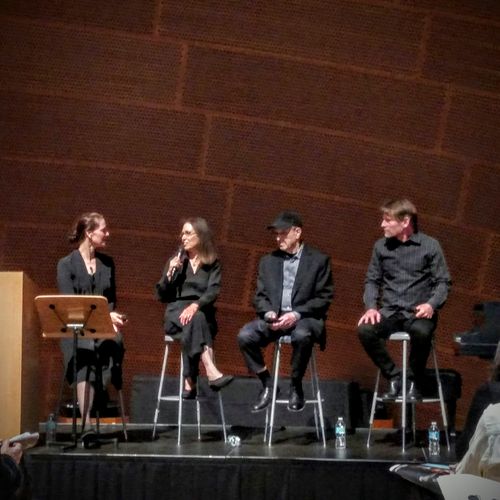 Ensemble Signal, by the way, recently released a new recording of Steve Reich's Music for Eighteen Musicians, a piece that stands as a permanent and unequivocal success. The Signal version is at least as worthy of a listener's time as Reich's own original recording of the piece. Recommended, both.

Next on Grand continues tonight and Sunday afternoon; "Mnemosyne's Pool" repeats on the Sunday program, on which Ensemble Signal will return to perform David Lang, Michael Gordon and Julia Wolfe's 2005 "Shelter".

Cross-posted from Genre, I'm Only Dancing.