The Naked and the Dead
[David Lang: anatomy theater] 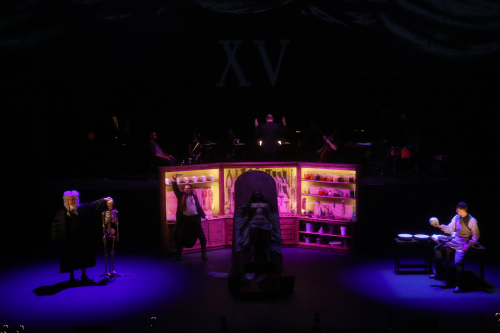 I asked myself if it were credible that [Evil as] a cosmic force of the sort postulated by Averaud could really exist; or, granting its existence, could be evoked by any man through the absurd intermediation of a musical device.

I'll lug the guts into the neighbour room.

Press and publicity for the world premiere of David Lang's new anatomy theater—being a Lang piece, it arrives with neither a definite article nor capitalization—have emphasized its most lurid qualities: A live hanging! A singing-stark-naked-mezzo corpse eviscerated before your eyes! Vitals, and vital bodily fluids, galore! The Guardian asks: is it "the goriest opera ever?" Perhaps it is. But at the opening performance Thursday evening the grisly entrails, the leering grotequeries, the uncomfortable voyeurism, and the general awfulness of the characters were largely beside the point. Despite being as nasty as promised in its particulars, the larger experience of anatomy theater is unexpectedly humane and cathartic. The gore is a McGuffin.

Working with a libretto co-written with artist Mark Dion, Lang's opera follows the final hours, living and dead, of Sarah Osborne (Peabody Southwell) in 18th century London. The performance begins outside of the auditorium, with the public spectacle (replete with sausages and beer) of Osborne's hanging for the murder of her abusive husband and her two small children. Before the noose is applied, she delivers her confession to the crowd, narrating a life of sexual abuse, street living, prostitution, drunkenness and misery. The execution accomplished, the executioner removes his hood to reveal himself as one Joshua Crouch (Marc Kudisch), proprietor of the nearby establishment at which the murderess's corpse ("still warm!" he promises with a smirk) will be publicly dissected. The spectators are ushered to their seats and the demonstration begins. 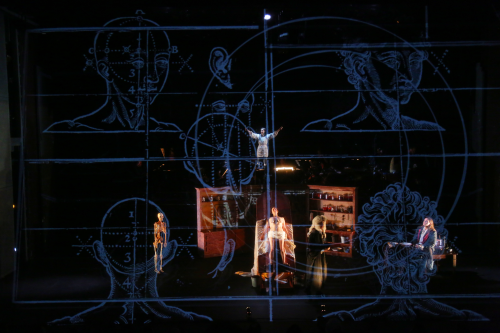 Crouch continues as the acidly smiling host of the proceedings, making little secret of the contempt he holds for the "young gentlemen" who have entered his theater or his pleasure at parting them from their money. So many supposed physicians, scientists, artists, he marvels, here to closely observe an attractive young woman (a smack of the lips) laid open as open can be. And adding to the specialness and high purpose of the occasion, a celebrity anatomist will be in charge: the renowned Baron Peel (Robert Osborne), on whose behalf the actual dismantlement of the body will be performed by his assistant, Mr. Strang (Timur).

Baron Peel is more moralist than scientist: he knows what he expects, nay! is certain, to find even before he sets to looking for it. He will demonstrate to us all that the evil nature of Sarah Osborne, and the judgment of the Almighty upon her, are reflected tangibly in the condition of her internal organs. He cannot be sure where exactly evil lies, but its physical presence will be revealed, for the expansion of Knowledge and the greater glory of God, or at least of Baron Peel as God's minister on earth.

anatomy theater is concerned with that question of evil, its nature, and where and how it may be revealed, removed, or understood. It has on its mind as well the question of power: Baron Peel holds power over everyone in the room by virtue of his place as a peer, high on a rigorously unbending apparatus of class. All of the other characters have power over Sarah Osborne because she has no present ability to argue otherwise, and because she never really did: the power, recurringly misused, of men over women is a given in Sarah Osborne's world, and her having acted brutally to protest and thwart it is the very thing that has brought her to her death. While these men seek to find corruption in the body of Sarah Osborne, they demonstrate by the very casualness, even jollity, with which they disdain her life and humanity that their power is itself corrupt.

With the aid of uncomfortably persuasive practical stage effects, the body of Sarah Osborne is cut open and the organs removed one by one. The initial incision produces a seemingly endless skein of intestines, cast aside immediately as of no scientific interest. The process continues as first the stomach, then the spleen, then the heart, and finally the uterus is extracted and carefully measured and described to the Baron by Mr. Strang. To the Baron's growing annoyance, each organ proves to be healthy and without apparent flaw. None shows any sign that it has housed any ill, let alone been the home to heinous evil. At the last, the Baron assures his audience that the search has not been fruitless, for we have conclusively established "where evil is not" in this woman. Perhaps it is in the soul that one might find it. He bids good night, and Crouch ushers the audience out with an invitation to meet him at the rear door should any wish to purchase any of the remaining portions of the body for (heh heh) further study at home.

If, apart from squeamishness or repulsion at the visceral effects, a viewer is left feeling icky and uncomfortable, it may well be the result of participating in a voyeuristic exercise, as the principal voyeur. Crouch repeatedly reminds the viewer that he (all would have been "he" in keeping with the period setting) has paid handsomely to enter and to look and look and look, inside and out, at this entirely defenseless human woman. Peabody Southwell, as Sarah, lies upon the table, motionless and entirely naked for most of the proceedings. Each member of the audience is in some way complicit in that reduction.

For all that, the end result of anatomy theater is not reductive. It is, rather, almost hopeful, reminding its discomfited witnesses that ugliness and cruelty are ever present, but that they are not all there is to human life. Beauty, decency, and aspiration to being better and kinder can be found and are worth seeking after. In the particular case of anatomy theater, skill and beauty in the creation of the piece and skill and beauty in its performance serve as the carrier waves for that more comforting view.

The singing and character work of the four onstage performers is exemplary. Sarah Osborne is provided two singular arias, one on each side of her death. In the prologue outside the theater, she gives her confession before execution, telling the story of her life and the conditions that led her to suffocate her husband and infants. Peabody Southwell presents it with mesmerizing directness, nuance, and intimacy, such that the body next seen on the dissection table is not that of a stranger. Midway through that dissection, Sarah Osborne sings again, her song consisting largely of the repeated phrase "My heart." That organ is on the side table with Mr. Strang, who has just reported its unblemished quality and been instructed to seek further after evil, in the womb. Fast approaching literal disembodiment, Sarah Osborne evokes the heart's intangible qualities, the capacity and wish for love, and the natural good she stored there through a pain-filled life. While evil may lie somewhere close by, its antithesis is also near in that moment. 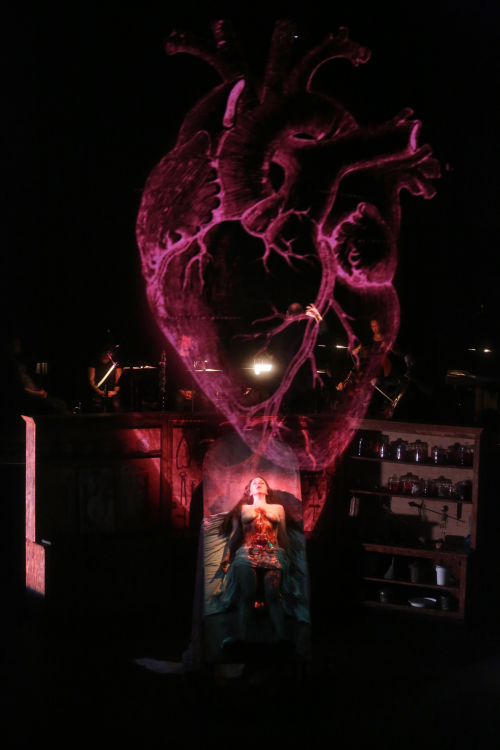 Each of the singing actors surrounding Peabody Southwell is as strong in his way as she. Marc Kudisch's Crouch is part carnival barker, part entrepreneur, part back-alley porn peddlar, with a dollop of 50's horror-comic undertaker for spice. Crouch is a horrible person, he despises humankind, but a fellow has to make a living, so he provides ample entertainment in his flamboyant person. anatomy theater incorporates a fair amount of bleak and perverse humor, most of it emanating from the dreadful Mr. Crouch. As Baron Peel, Robert Osborne is called upon to be straight and narrow at all times, the embodiment of self-important seriousness and authority. Osborne gives Peel's declamations a from-the-pulpit quality that suits him well. Mr. Strang, meanwhile, is the closest the piece comes to a male character with any redeeming qualities. He provides the physical labor to take Sarah Osborne apart, without seeming to take any unwholesome pleasure in it, and reports his findings as to each organ earnestly, affirming strongly that he can discover nothing wrong with nor any sign of evil in any of them. Timur presents him as something of a skilled and intelligent innocent, not ultimately convinced of Baron Peel's "evil is here" premise. (Timur deserves extra credit, as well, as he seems to be charged with actually triggering and applying the sanguinary effects that so vividly disembowel the late Sarah Osborne.)

Where goodness truly lies in anatomy theater is in David Lang's score. For the most part, even in the martial tattoo accompanying the confession and execution, Lang has made use of the tools he has developed in recent years in works such as the Pulitzer-winning little match girl passion and death speaks—the latter much admired by this blogger. Texts are set over semi-repeating cells of melodic material, the melodies never seeming to move outside a limited range in any given sequence, but gaining momentum and motion by accretion atop and beside one another. The result is what could be described as a highly textured flatness, as when in an abstract or minimalist painting a seemingly unvaried color surface is revealed to have been worked with exacting precision at its finest level, discoverable only upon closest inspection. As a musical method, it proves highly effective at creating an underlying ethereal ache or melancholic and untethered yearning, moving without seeming to move. Around and about, Lang has distributed sections in a style that somehow combines opera seria with the smoky acidity of Weill setting Brecht. (The period nature of the piece and the presence of an accordion in martial tattoo accompanying it gives the execution, apart from Sarah's confession, a hint of the famous near-hanging of MacHeath in The Beggar's and/or Threepenny Opera.) The score is performed with rigor and vigor and, yes, ample heart by members of the wild Up collective, conducted with his usual energy and commitment by Christopher Rountree.

anatomy theater is premiering as part of Los Angeles Opera's "Off Grand" initiative in conjunction with Beth Morrison Projects. Performances are in the lobby and theater at REDCAT, beneath Walt Disney Concert Hall. The final performance of the run is Monday, June 20. Procuring tickets may be in the realm of the possible but at this point is, more likely than not, not. Perhaps another time.

The beer being served at the execution was a delicious Milk Thistle Stout created by Solarc Brewing, the fine craft beer maker co-founded by Archie Carey, bassoonist with wild Up. There is no bassoon in anatomy theater nor, so far as I know, in the beer.

The blogger attended the opening performance of anatomy theater as a paying customer. He was offered and accepted free beer and sausage prior to the performance, but that was on offer to all.

I would rather have seen this -- even without beer and sausitches -- than the English National Opera *Tristan and Isolde* I saw last night. I'll take concept opera over no-concept opera every time.