Invisible Synchronicities
[The Industry Records presents
The Edge of Forever] 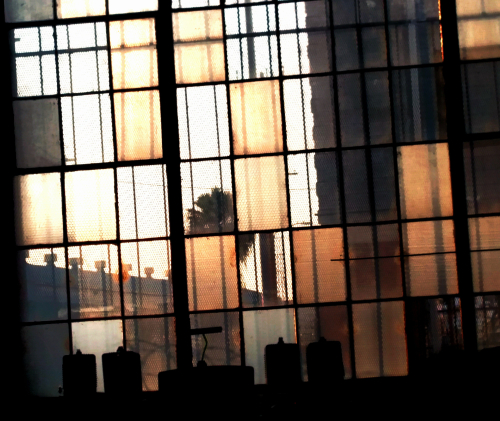 Enterprising Los Angeles new-opera company The Industry specializes in productions in expansive and unexpected places: in and around a working rail terminal for Christopher Cerrone's Invisible Cities, a fleet of moving limousines around the city for Hopscotch. The Industry also operates a recording imprint, and on Friday evening hosted an event on the occasion of its second release, The Edge of Forever, composed by Lewis Pesacov on a libretto by Elizabeth Cline (also The Industry's Executive Director).

The Edge of Forever is a sort of ultimate pièce d'occasion, intended to be performed only once, on a precise date and at a precise time, portraying events that are themselves occurring at that precise moment, though they have been foreordained to happen for millennia. The date in question was (in local Los Angeles reckoning) the 21st day of December, 2012, the final day of the 5,126 "long count" as reckoned by the Mayan calendar, on which occasion either the world was to end, or else a new and renewed world was to begin. The single performance occurred in the Mayan-revival spaces of the Philosophical Research Society, in the Los Feliz district. The recording documents that performance. Three of the opera's five scenes are represented by a live recording from the event, while the first and last scenes are later studio recreations including multitracked vocal parts.

As performed and recorded, The Edge of Forever is incomplete, representing only the final act of a three-act opera. The first two acts take place, or took place (in local Los Angeles reckoning) on the 13th day of March in the year 830. On that date, the first day of the tenth of thirteen cycles comprising the long count, the ancient Mayan astronomer Laakan was granted insight by the gods: he must descend into the cenote, or ceremonial cavern, there to wait out the years until the end of the thirteenth and final cycle, when he will achieve unity with the beloved one, Etznab, at the moment of the world's renewal. The performance of the third act in 2012 thus took place following the longest intermission in operatic history: 1182 years. 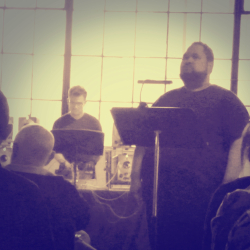 That final act, as it comes to us now, begins as did the first so long ago, with a procession of scribes, all four sung on the recording by Abby Fischer with an exuberant and often birdlike tintinnabulist ululation. Laakon (tenor Ashley Faatoalia, Marco Polo in Invisible Cities) emerges from meditation and sacred slumber, describes what a long and often despairing wait it has been, praises and embraces the wisdom of what the gods foretold and ordained, and achieves an apotheosis of sorts with the long promised (albeit unheard and unseen) beloved. After such a prolonged caesura, the act itself lasts roughly 38 minutes.

Ritual and enlightenment, not plot action, are the order of the day. Musically, the extant parts of the work build over rich drones and an array of bells, chimes, and other long-resonating percussion. Laakon's exaltation in the final scene aspires most satisfactorily, and without any obvious Wagnerian allusions, to achieve a Tristan-like sense of endless rising.

The non-singing musicians of The Edge of Forever, in 2012 and on the recording, are members of wild Up, conducted by Christopher Rountree. To open the release event, Rountree and a subset of those players performed another Lewis Pesacov piece: an instruction-based work also for bells and chimes and suchlike long-sustaining vibration producers, the performers singing wordless harmonics triggered by the sound of one other's instruments, the whole eventually subsiding to breath and a long sustained meditative silence. From The Edge of Forever itself, the release audience heard the recorded version of the first scene, in a highly effective surround mix, and a similarly effective live performance of the final scene.

The Industry recording is being released principally on vinyl, with texts and inserts and packaging harking to the former era of deluxe opera albums. (In his comments at the release, Lewis Pesacov had fond reminiscences of growing up perusing his parents' old opera boxed sets.) The Edge of Forever is also available for download in multiple digital formats via Bandcamp. The June 24, 2016, release event was held at warehouse-turned-arts-space, 356 Mission, and was free to all. The blogger earlier received an advance promotional copy of The Edge of Forever on CD [rare and collectible, perhaps, given that the actual release is only vinyl and digital] through the good offices of The Industry's publicists at DOTDOTDOTMUSIC. Photos, other than the album cover, are by the blogger, from the release event.