Tempted by the Fruit of an Author
[Four Larks: The Temptation of St. Anthony] 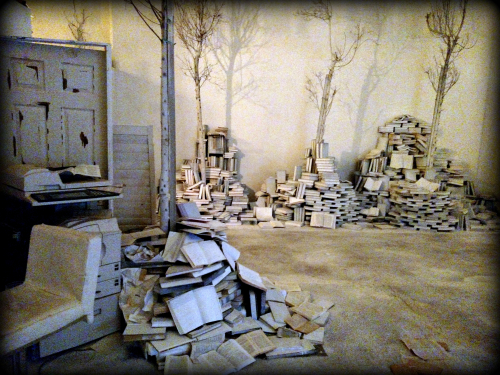 O God, I could be bounded in a nutshell, and count myself a king of infinite space—were it not that I have bad dreams.

Infinite space in a nutshell is a cogent metaphor for what the creative performative collective Four Larks offers in The Temptation of St. Anthony, scheduled to run through October 2 at [a secret location revealed to ticket holders] in downtown Los Angeles. The Temptation is as all-consuming in its concerns, and as vivid and innovative in its theatrical gestures, as Einstein on the Beach, but compresses it all into a mere 75 minutes, with a dozen performers, a set and properties scavenged and cobbled together from heaven knows where, and in a space that would not fill an Einsteinian caboose. It is a mighty microcosmos.

The intense compaction of The Temptation of St. Anthony is perhaps a tribute to its origins in Gustave Flaubert's novella. Flaubert spent nearly half his life writing the book, each successive version etched and edited to remove everything he determined to be inessential. His first draft ran well over 500 pages. Some two-thirds of that disappeared in the second draft, and so on until the page count of the final version barely topped 100. It is nearly devoid of external plot, but tells of St. Anthony of Egypt (c. 251-356) who, after many years of living the life of a holy hermit in the desert (atop a cliff, where "an aged and twisted palm tree leans over the abyss") is beset one night by doubt-driven visions designed to draw him from his holy path: the Seven Deadly Sins appear, and a series of rulers (Nebuchadnezzar, the Queen of Sheba), heretics, mages, scientists, pagan gods and philosophers descend upon him. At daybreak, he emerges tested and recommitted to his faith, resuming his pious life. The incident was long a favorite of painters, as it provided an opportunity to depict lewdness and grotesquerie under the guise of spiritual teaching. Flaubert's depiction is far more austere and inward looking. (For lewdness and grotesquerie in Flaubert, the reader is advised to consider his epic depiction of same in Salammbô.) 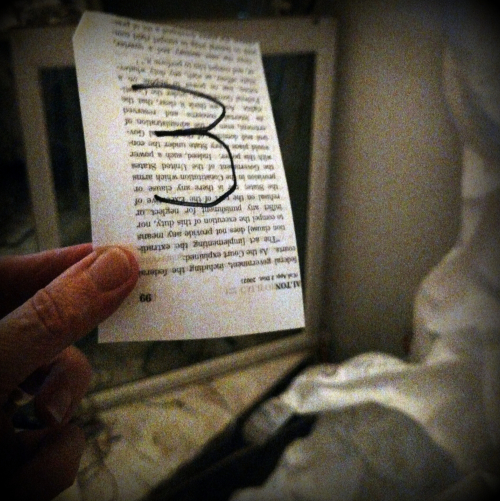 Four Larks describes itself as an artist operated collective, founded and guided by Artistic Director Mat Diafos Sweeney (also the adaptor/writer/composer of The Temptation, with lyrics by Jesse Rasmussen) and Creative Producer (and principal Temptation designer) Sebastian Peters-Lazaro. "Junkyard opera" is the portmanteau description for the Larks' body of work. The Temptation is described as "a euphotic rite of music, dance and visual theatre." It is less an opera or play than it is a pageant or, most accurately perhaps, a contemporary masque. Instead of in a palace or chateau, however, The Temptation plays out inside a seemingly shuttered one time wholesale floral facility a few blocks from the Grand Central Market in downtown Los Angeles.

As a courtly masque might include elaborate constructions depicting the provinces of gods or a nymphean retreat, Four Larks has devised a mystic cave environment of its own, filling its chosen space far, wide, high, and low, with books, abandoned and outmoded communications devices, artistic detritus, faux ruins, and a myriad of uncategorizable objects of all sorts, all colored a desert-blasted off white. On arrival, members of the audience can explore the eccentric desolation, perhaps with a refreshment in hand. At performance time, they are ushered into the comparably be-cluttered performance room. At the front of the floor level stage area, The Hermit (Max Baumgarten) is already present. His thick and sand dappled Bible beside him, he is focused intently on a battered manual typewriter, hard at work on what proves to be the text of The Temptation of St. Anthony. 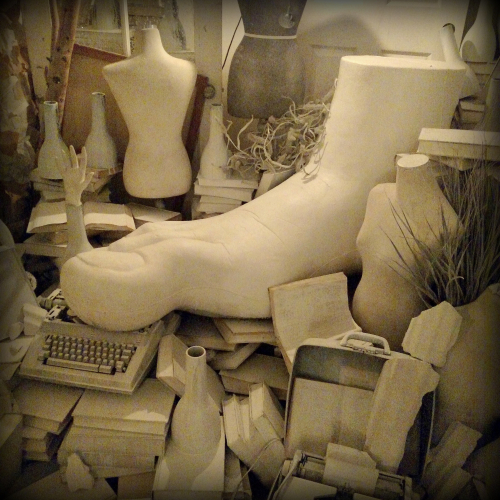 In form, Flaubert's Temptation resembles a drama more than it does any traditional 19th Century novel. Considered as a play, The Temptation can be tied to the symbolic and nocturnal experimentalism of Strindberg's A Dream Play or Ibsen's Peer Gynt (which Four Larks took on during a period its founders spent in Melbourne, Australia). As a working premise, the conflation of the writer, the work he is writing, and the events within the work he is writing handily throws open the door to the free flowing, ambiguous shape shifting free for all that ensues.

The Temptation begins with an authorial voiceover, speaking the introductory description of the hermit and his hermitage as it is typed, but the creator is soon absorbed by the creation as the visions and manifestations come thick and fast. For much of its later stretches, The Temptation's chief speaker is not The Hermit but the dreamt version of his one time follower Hilarion (Caitlin Conlin), whose evening attire and sprightly wickedness of manner may recall the Master of Ceremonies from Cabaret. Figures historical and symbolic emerge and disappear with the rapidity of shuffled cards. Ideas and arguments fly about at breakneck speed. The Hermit is caromed about in a mazy concatenation of movement, music, light, speech, sound and surprise, emerging (as perhaps he had not expected) back at the place he began, his typewriter the still point in an uncertainly resettled world. He is left, as is his audience, to reflect upon—or more likely simply to muse and to marvel over—whatever it was that has just happened to him. As one does, when what has happened is something of a wonderment. The Temptation of St. Anthony is a wonderment like no other in recent memory, and not to be missed or resisted. 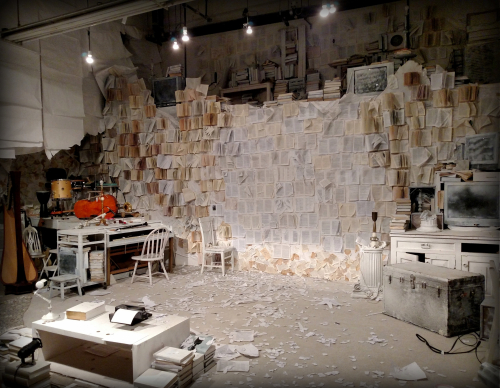 The Temptation of St. Anthony is currently scheduled through October 2, 2016. Capacity is modest and some performances are sold out. Such tickets as may be had may be sought here.

The blogger attended the September 8 performance of The Temptation of St. Anthony as a paying customer.

Photos above (l'espace) by the blogger. Photos below (les artistes) by Michael Amica, used by kind permission of Four Larks. 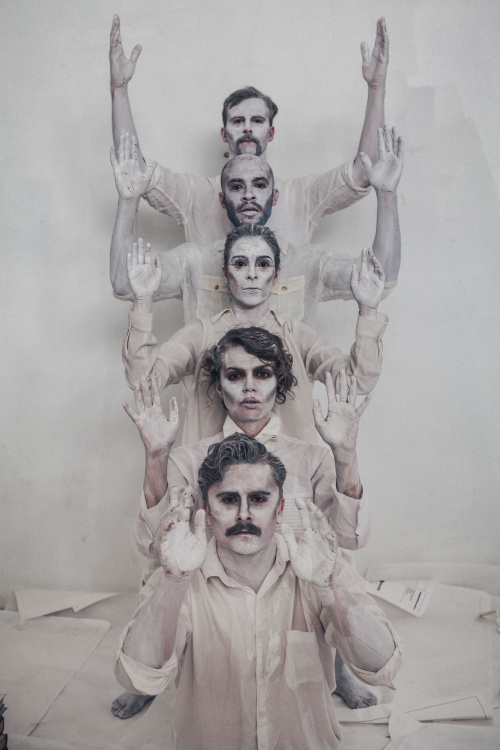 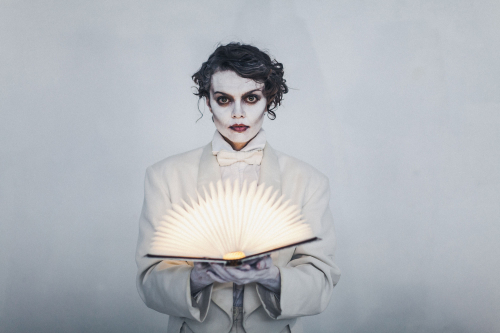 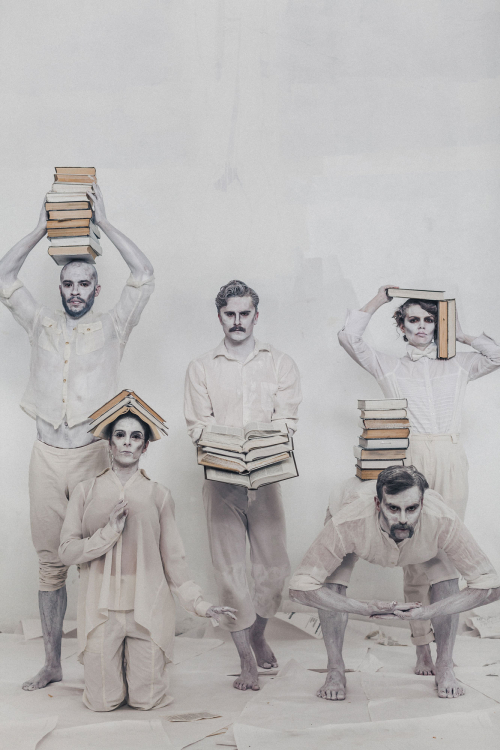