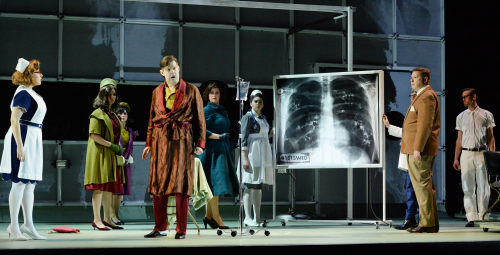 "Walt Disney", as a name, has never gone away, although it was 50 years this past December 15 since Walter Elias Disney the man expired. It is likely difficult for anyone much younger than 60 to understand what a constant and continuing presence Disney the man had in U.S.life and culture straight up to the moment of his death. Philip Glass's twenty-fifth opera, The Perfect American, which on Sunday received its belated U.S. premiere via Long Beach Opera, explores and (as it were) reanimates the man in the most appropriate way: by spinning him through a mirror-fragmented jumble of stories.

Adapted, by librettist Rudy Wurlitzer, from a novel by Peter Stephan Jungk (Der König von Amerika), The Perfect American takes place during the final months of Disney's life, imagining him hospitalized and lighting out for the territory of dreams and occasional nightmares, recalling versions of his past, confronting his history, his strengths and weaknesses, what he was and became and might be in the future. Citizen Kane-like, it freights its protagonist's earliest years - here, Disney's childhood in Marceline, Missouri, in the company of his indispensable brother, Roy - ceiling-high with significance and meaning. 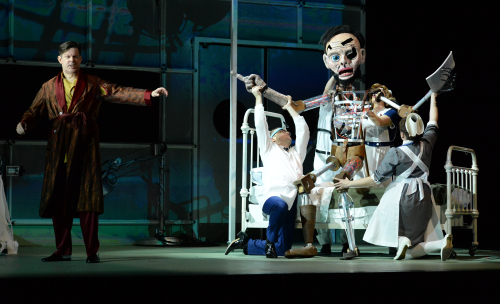 Dramatically, it works more often than not, producing a nuanced and faceted Portrait of the Artist as a Messy and Perhaps Unknowable Human Being. Reports from the world premiere in Madrid in 2013 focused in on the critiques, particularly the conclusion of Act 1 in which Disney voices an array of [sadly standard for their day] racist views, and is set upon by his own Audioanimatronic simulacrum of Abraham Lincoln. The racist attitudes are there, certainly, as are Disney's willingness to battle union labor and to bare knuckle it against anyone who stood in the way of his sometimes self-important creative vision. But if these flaws are not forgiven - and they are not - they play off against what their human carrier accomplished: not a business empire built on shabby real estate deals or moving other people's money around, but an empire built on finding, feeding and fulfilling the dreams of others. Disney is seen here (though the comparison is never made overtly) as a figure akin to Wagner, whose creative work is not ultimately poisoned by his sometimes deplorable personal qualities.

At Long Beach, director Kevin Newbury and his design team have confined the entirety of the literal action to Walt's hospital room and the theater of the patient's mind. When Walt casts back on his fondness for trains, hospital beds become trains. When he faces a vision of an owl that he killed in a panic as a child - the only time, he insists, that he ever killed anything - it appears as a child patient's stuffed toy and as a costume constructed from medical paraphernalia. Silhouettes of Marceline, Missouri, and of a classic Disney castle are constructed of bottles, clipboards, and the like, a surgical lamp casting their shadows on suspended bedsheets. 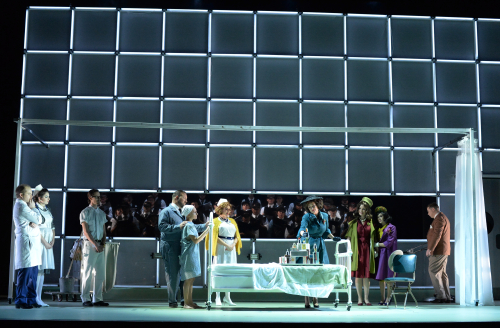 Philip Glass is easily and unreasonably stereotyped as nothing but a peddler of arpeggios, based on his earliest work. There was more to him then, and there is much more to him now. Glass has developed a genuine "late style" that incorporates all those swirly arpeggios and repetitions in company with a restrained  but potent approach to melody (melody!) and an array of punctuation tricks in the percussion section. It is a richly whipped brew, riding long and dextrous rhythmic lines. It is also, perhaps surprisingly, a solid ground over which to sing, allowing the audience to actually hear and decipher the words and the singers to deliver them with dramatic point. The chorus, out of keeping with the usual Glass approach, is positively folksy: they sing "happy birthday," they quack and hoot, and they sing comforting bromides about dreams coming true much as the choruses do in the classic Disney pastorals. 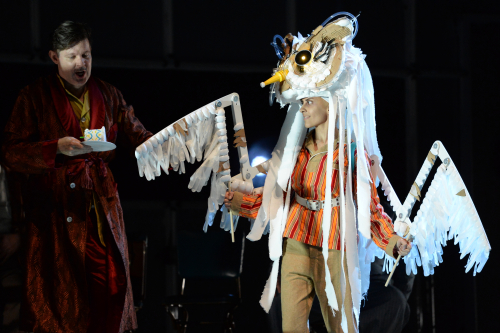 Disney's Lincoln automaton, resident at Disneyland for over 50 years, was originally created for the 1964 New York World's Fair, where it was the centerpiece of the pavilion of the State of Illinois. (The best thing in the Disney studio's otherwise misfiring Tomorrowland was its loving recreation of elements of the Fair.) Disney and his "Imagineers" provided animatronic creations to a total of four pavilions in 1964: Lincoln for Illinois, the "Carousel of Progress" for General Electric, dinosaurs and cavemen for Ford and, most inescapably, "It's a Small World" for Pepsi. Pepsi's Moppets of the World make no appearance in The Perfect American, but Walt compares himself favorably to Henry Ford and Thomas Edison and Lincoln, as noted, looms large.

References to elements of Philip Glass's own past work are everywhere as well. Walt's love of trains, in particular, readily triggers memories of the trains in Einstein on the Beach; his yen to build things suggests Akhnaten; the collective, often mechanical effort on the part of animators, and the push against it, echo the tension between natural and mechanized worlds in Koyaanisqatsi; an owl appears prominently in Glass's portion of Robert Wilson's the CIVIL warS, as does Lincoln,whose concern for equality and racial justice Glass returns to in the recently revised Appomattox (which one can hope will find its way to southern California someday soon). The Perfect American seems at times as interesting a survey of the composer's creative history as it is a survey of Disney's. 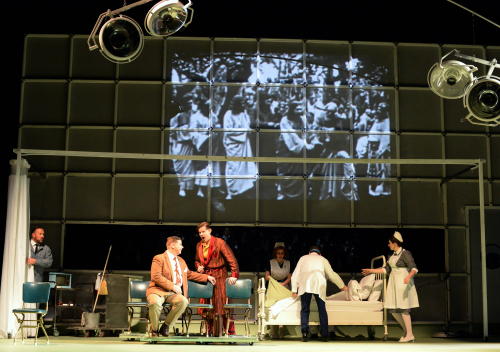 The character of Walt Disney is on stage from start to penultimate scene (and after that, receives in this production a charmingly homespun apotheosis, waving us goodnight in a manner recognizable to anyone who grew up on The Wonderful World of Color). Justin Ryan as Walt hits all the necessary notes, musically and dramatically, only occasionally veering toward overselling the part. He is persuasive as a driven and powerful man who would rather return, if he could, to a simpler world of his boyhood. As stalwart brother Roy, Zeffan Quinn Hollis is duly stalwart; at Sunday's premiere, he doubled up as the duly righteous voice of robo-Lincoln. Suzan Hanson as Lillian Disney brought to the part some of the grounded dignity she previously displayed as Marilyn Klinghoffer, particularly in the late scene when Walt's death from lung cancer is revealed as inevitable. Jamie Chamberlin, previously one of LBO's twin Marilyn Monroes, charmed as the fictitious Walt's personal nurse Hazel George, whom he addresses as "Snow White".*

Being as it is not the Big Opera Company in town, Long Beach Opera is only able to mount two performances of The Perfect American. The remaining date is Saturday, March 18, and tickets are certainly to be had. (These performances are in the cavernous Terrace Theater, so the number of potentially available seats is not small.) Let your conscience be your guide. It is whispering that you should go.

*Correction: The original version of this post referred to Hazel George as a fiction. Assorted fact checkers, including the singer, have pointed out that Hazel George was very real and that she was a remarkable, if hidden, figure in Disney's creative life.

It sounds a proper tonic to Tom Hanks hagiographic Walt in Saving Mr. Banks. If it finds it's way north, I will seek it out.