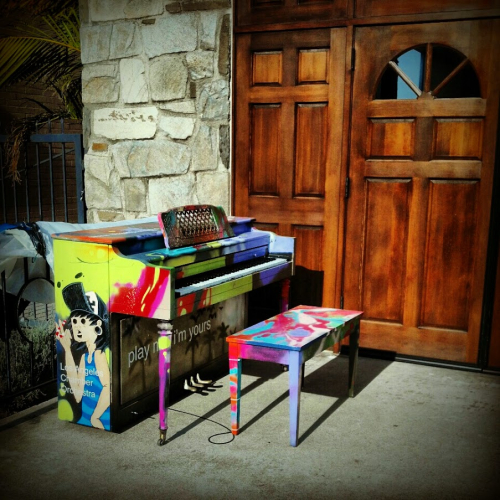 Time is out of joint, per usual, but some things stay firmly fixed: yet again I must give way before my compulsion to present to you the only remaining recurrent feature of this dusty and neglected blog, "Listening Listfully", this Fool's annual catalogue of favorite album/EP-length recordings of the past year. A little of what you fancy does you good, or so it should.

This year's List has roughly 90 entries. The first 60 of those are roughly ranked: the rankings grow ever more imprecise as you go down the tally, but I am satisfied with the larger shape of the thing. The final group of 30 or so is alphabetical. I have long styled this blog as an "index of enthusiasms." That remains true of the List. These are personal favorites, as always, rather than "bests"—although I maintain that everything here is here because it is genuinely among the best things of the past year.

I remarked upon a number of these recordings on Twitter over the year. Where appropriate, I have embedded copies of some of those tweets. When the tweets went out with Bandcamp player links embedded in them, I have omitted a standalone player in the interests of space.  When there is no tweet to rely on (and sometimes even when there is) I have appended some brief commentary on the first 20 selections. Where that commentary is especially brief, or where it is foregone altogether, it is likely a result of the desire to Get This Done so that it might post while it is yet still 2019 (at least in California). I gave up at Number 20.

The same flawed, entirely subjective, and internally contradictory thing as it ever was, here begins the fourteenth edition of The List:

When all's said, Because Patterns emerged as my clear first choice, for a cluster of reasons. Chiefly, it is the "New Music" recording I played most frequently through the year, which I did because I dug it.

I attended the premiere of the title piece in October, 2015, when it was part of an evening of microtonal and just intonation piano/keyboard music put together and performed by Vicki Ray and Aron Kallay, without whom the pianistic life of Los Angeles would be a poorer thing, in a madly terrific show at Boston Court Theater in Pasadena. The original version of "Because Patterns" was a duo for prepared pianos, and thoroughly delightful as such. If you listen closely, you will find flotsam allusive bits of that original still bobbing and bubbling and implicating through the heavily twitched, glitched, and processed version that appears on this release. The twitches and glitches, and the insertion of equally obscured bits of another piece ("Deep State", for bassist/composer Scott Worthington), are thoroughly appealing in themselves, and yield a commentary on a commentary on a commentary in a mirror through a fog. It is a deep and attractive mirror (and fog) indeed.

This is certainly one of the most 'Southern California' recordings to land at Number One on this List. Isaac Schankler teaches at Cal Poly Pomona these days, and has been the driver behind the People Inside Electronics performance series. The performers here are all current Southern Californians: Ray-Kallay, Worthington, pianist Nadia Shpachenko ["Future Feelings"], and violinist Sakura Tsai ["Mobile I"], all of whom are palimpsested to differing degrees by the composer's inquisitive, organic electronics.

It keeps me coming back.

Lastly: when I went looking for appropriate Twitter commentary, I found this foreshadowing thread between Isaac Schankler [@piesaac] and meself. [Click through to the whole thread for maximal effect.]

Also, we can't exist without patterns. We desperately need patterns just to survive.

I have not done an audit, but my sense is that this year's List includes my highest proportion yet of jazz and jazz-ish releases. Caroline Davis's Alula leads that parade. I fell for it instantly, and my regard has not faltered. The composer, on alto saxophone, leads her trio (Matt Mitchell on synths, Greg Saunier on drums/percussion) through an arcing series of tunes inspired by a bird's wing. The transition, at the center, from the cacophonous "Lift" to the elegaic and beautiful "Coverts" is near perfect.

Anthems, meanwhile, arrived on the scene (via jazz specialist Sunnyside Records) as a surprise lagniappe later in the year, a quartet session co-written and c0-led with keyboardist Rob Clearfield. It made sense to me to double it up as a shared entry with its high-flying predecessor.

Alula is a New Amsterdam Records release, and a useful reminder that while that label is most associated with New Music (and the now-obsolesced "alt-classical"), it has long supported a smaller, but choice, group of jazz artists, such as Darcy James Argue's Secret Society. (My 2018 Number One pick - John Hollenbeck's All Can Work - was also from New Am.)

I have been enthusing over New Amsterdam and its artists for a decade now, but this was a particularly good year for them: you will find fourteen of their releases scattered through this year's List. I will take this moment to give an unsolicited endorsement to the NewAm subscription program, which I joined last February. As the number of MewAm recordings here suggests, I am amply satisfied with that choice.

40 tight minutes of lyrical, crunchy, of the moment jazz: flipping from feather light to heavy as the bottom of a well. I've listened through three times in rapid succession this morning, and I'm going right back in there. @caroenildavis @newamrecords https://t.co/rFpuuJesXs

Looks like 'someone' is fated to garner two (2) spots well up on my year-end favorite music list....
Rich, nutritious new music from @caroenildavis, working the languid/lyrical side of her particular waterfront, en quartet with pianist Rob Clearfield. https://t.co/g99y3gV0q9

It occurs to me, as I write these comments, that the first half dozen or so recordings this year share a directness of emotional expression that (apparently) resonates strongly with me. (Isaac Shankler's pieces are a bit circumspect about it, but it is not far beneath the ironic distance of their surfaces.)  In this group, the prime example is Michael Vincent Waller's Moments. As with his prior collection Trajectories - which was my #1 choice 2017 - Moments is largely made up of solo piano pieces, played by R. Andrew Lee. And, as with Trajectories, I find it very difficult to write about. Everything I think of to say translates roughly to: "Listen to this. Listen to this! This is so, so, so, so beautiful."

So we'll leave it at that for now.

4.    Christopher Cerrone/wildUp – The Pieces That Fall to Earth

Release Day Is Surely Come, so I need to weigh in one more time on @WildUp's @chriscerrone vocal music collection, "The Pieces That Fall to Earth".
It is rich and nutritious soul stuff, whatever your view of the soul.https://t.co/daGIuBAwLk

Not the only truly great piece this brief Century has produced, but absolutely one of them.https://t.co/LFTQbURHoQ

It's a superb piece, and what I may like best about it is that, after 30 minutes of the orchestra slathering elaborate impasto across all surfaces of the hall, it blithely and politely shows itself out with an elegant 3-minute duet for microtuned pianos.

I assure you:
you will be wanting this.
Maybe not today,
maybe not tomorrow,
but soon …
and for the rest of your life.

Afro-futurist jazz of amplitude & heart with a Fourth World gratin on a bed of Big Easy. Taproot excellence running from the profound base of yr spine to the secret wrinkles of yr inner head.

Enough politics.
Can we talk about what a killer record this is?https://t.co/1xE6AcWnlF

Friends. I am thoroughly and abidingly fond of this popular music album of charming and clever songs from earlier in this year. I would hope that you might be [fond of it] as well.@youtellmetoo https://t.co/eZWYHgDC8F

Practically perfect in every way.
If the Dead and the Dan, circa 1980, became one singularly elegant, smartly restrained and tasteful band … then entered the studio in 2018.
Kudos to mastermind T.J. Masters, to every player, and to @schlarb.https://t.co/StYLXLfj9Y

A superbly smart and sexy R&B record, among many other virtues. Ear-eating it like contraband popcorn, week after week.

More jazz: the Trombone Eminence of the West Coast Get Down, with as solid an outing as any groovy cat could wish.

Today's fresh adventure in The New UK Jazz is "You Can't Steal My Joy", just out from @EzraCollective . Certified free of Endgame or GoT spoliers.https://t.co/tBJeqjK9KK

Do not question: just listen.

A Cosmic Tonne of new music releasing tomorrow.
Do not sleep on this in the crowd:
Nathan Schram @schramnate 'Oak & the Ghost'.
Vonnegut-adjacent chamber music full of grit and pluck and vigor and drive and divers pleasaunte glories. Recommended heartily.https://t.co/FNC6IRX05Y

Gavin Gamboa throws new recordings out there on the Bandcamp, every month, pay what you will. It's unpredictable in form, in genre, and in the variance of your mileage and mine. These two items are placeholders for a general recommendation to remember him, and if you remember then follow.....

Beyond here lies ... more excellent music, but no further commentary

Numbers 61 through 90, in essentially alphabetical order

Djabe, with Steve Hackett – Back to Sardinia

Binker Golding – Abstractions of Reality Past and Incredible Feathers

Siggi Quartet – South of the Circle

Vanishing Twin – The Age of Immunology