Metal from the Shtetl:
"You Want Fries With That Big Maccabee?" 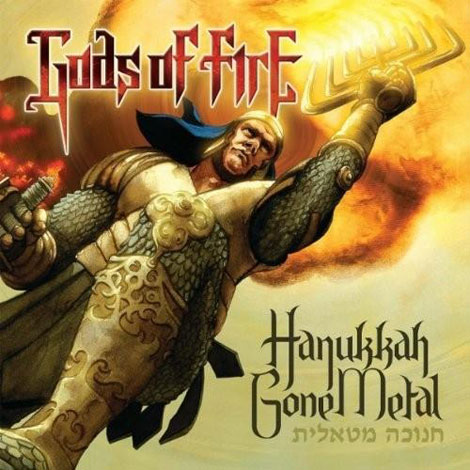 I have been able to say, truthfully, for most of my life that nearly all of my best friends are Jewish.  Thus it is with sincerity and enthusiasm that I wish to all a Happy Hanukkah in advance of that festival's commencement at sunset.

For the occasion, some choice seasonal musical oddities.

The Jewish contribution to heavy metal music is underappreciated, but crucial.  The very term "heavy metal" is generally reputed to have been first applied as a musical descriptor by Sandy Pearlman, writing in Crawdaddy magazine (about The Byrds, oddly enough).  Pearlman went on to groom and oversee the career of the seminal (largely Jewish) metal band, Blue Öyster Cult.

, which is exactly that: wild-eyed metal craziness with a Hanukkah theme.  What can it hurt?  It's even endorsed, more or less, by the Jerusalem Post.  Here, a video presentation of the title tune:
More at Brooklyn Vegan.

Meanwhile, Boston's dj BC has compiled a selection of Menorah Mashups,"Crazy Chanukah Mixes and Mashes", including this intermixturization, by FAROFF, of House of Pain's "Jump Around' with a slew of klezmer:

My own particular favorite, however, is this tasty stew of Gwen Stefani and Hava Nagilah:

By way of a counterweight to all this frivolous levity (or Levite frivolity?) one might turn to The Atlantic's Jeffrey Goldberg, who complains of "the Adam Sandlerization of Judaism in America" in the course of narrating the amazing true story of how he brought about the creation of a new and entirely serious Hanukkah song at the hand of that noted Jewish Mormon songsmith, United States Senator Orrin Hatch (R - Utah).

Goldberg makes the point that embracing Judah Maccabee, as the Senator has done, as a symbol of universal freedom of belief fudges the historical record just a smidge:

But, for such a pivotal figure, Judah Maccabee is one of the more misunderstood leaders in Jewish history.  He was not, for one thing, a paragon of tolerance.  One of contradictions of Hanukkah--an unexplored contradiction in our culture's anodyne understanding of the holiday--is that the Maccabee brothers were fighting not for the principle of religious freedom but only for their own particular religion's freedom. Their understanding of liberty did not extend even--or especially--to the Hellenized Jews of Israel's coastal plains. The Maccabees were rough Jews from the hill country of Judea.  They would be amused, if they were capable of amusement, to learn that their revolt would one day be remembered as a struggle for a universal civil right.

But what is the good of an historical figure, after all, if he or she cannot be remade in our own image?

So light the lights, spin the dreidel, wake in the night wracked with gelt, and all in all have a Happy Hanukkah if you're having any Hanukkah at all.

Having recently hosted weblogogic visitations by the Greek deities Dionysus and Apollo, I am pleased to learn that they and their fellow Olympians may soon be called out of retirement.  The Guardian reports:

It has taken almost 2,000 years, but those who worship the 12 gods of ancient Greece have finally triumphed.  An Athens court has ordered that the adulation of Zeus, Hera, Hermes, Athena and co is to be unbanned, paving the way for a comeback of pagans on Mount Olympus.

The followers, who say they 'defend the genuine traditions, religion and ethos' of the ancients by adhering to a pre-Christian polytheistic culture, are poised to take their battle to the temples of Greece. 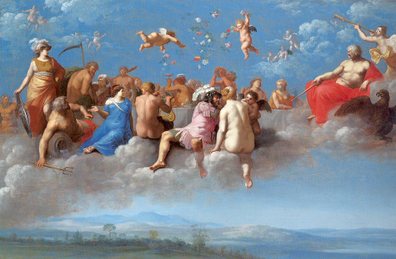 In terms of civil liberties the Greek court's ruling is actually somewhat of a big deal, as Greece has hitherto not been particularly open to the free exercise of religion.  Per the Guardian story: "About 98% of Greeks are Orthodox Christian, and all other religions except Judaism and Islam had been banned."

The Orthodox authorities are none too pleased by the Court's decision, accusing the Olympophiles of "idolatry" and tarring them as "miserable resuscitators of a degenerate dead religion."

The Oracle at Delphi could not be reached for comment.

The Herbalist Speaks of Liberty

[S]ince politics are everywhere, I wonder how being a libertarian squares with being a devout Catholic. Sincere inquiries from an apostate.

Martin Grace has responded here, and may have more to say later. I have no qualifications to address this question myself, and I wouldn't even bring the matter up if I hadn't stumbled last night upon an Example From Literature that may be relevant.

Yesterday, I posted a quotation from Giuseppe Tomasi di Lampedusa's novel, The Leopard, which is my evenings' reading this week. The book follows a Sicilian prince, Don Fabrizio of the House of Salina, during the early 1860s, as Garibaldi and company bring about the ouster of the Bourbon monarchy and the unification of Italy, with the accompanying rise of the bourgeoisie and decline of the old nobility. Among those attached to the Prince is the Jesuit Father Pirrone. In the latter part of the book, Father Pirrone takes a few days away from Palermo to visit the tiny hamlet of San Cono, where he was born. San Cono, we are told, is today "thanks to the bus . . . almost a satellite star in the solar system of Palermo, but a century ago belonged as it were to a planetary system of its own, being four or five cart-hours from the Palermo sun."

In the evening in San Cono, Father Pirrone sits in his room talking with a group that includes a local herbalist. The conversation turns to the changes being brought about by the post-unification regime. Father Pirrone advises that they all must "face up to the reality of this atheist and rapacious Italian state now in formation, to these laws of expropriation, to conscription which would spread from Piedmont all the way down here, like cholera. 'You'll see,' was his not very original conclusion, 'you'll see they won't even leave us eyes to weep with.'"

These words were followed by the traditional chorus of rustic complaints. The Schiró brothers and the herbalist already felt the new fiscal grip; the former had had extra contributions and additions here and there, the latter an overwhelming shock: he had been called to the Town Hall and told that if he didn't pay twenty lire every year he wouldn't be allowed to sell his potions. 'But I go and gather the grasses, these holy herbs God made, with my own hands in the mountains, rain or shine, on certain days and nights of the year. I dry them in the sun, which belongs to everybody, and I grind them myself, with my own grandfather's mortar. What have you people at the Town Hall to do with it? Why should I pay you twenty lire? Just for nothing like that?'

Thus literature teaches us that even a good, simple 19th century Sicilian Catholic prefers his God-given liberty to the petty depredations of the state. Next question, please.