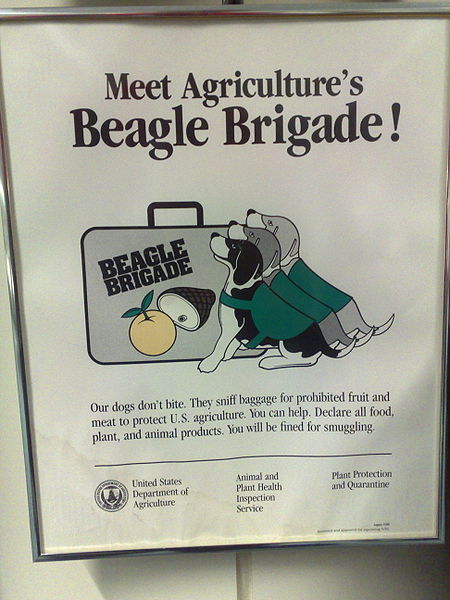 I am flying today to Orlando, Florida, for a weekend of risk-and-insurance jollity with my fellow CPCUs.  If you should find yourself loitering about the Marriott World Center hotel on Sunday morning, you might try sneaking in to the annual Mock Trial, in which I will be fighting the good fight on behalf of my fictional client in a spirited Appellate Cage Match of vasty deepness.

The sign above was photographed in the Orlando International Airport in 2008.  I do not know if it is still there.  Much is communicated by this sign, though but little is revealed.

It is comforting to know that Security Theater, like the vaudeville of old, still has a place for a good dog act.

The promise that I might be permitted to help sniff luggage is intriguing.

The promise that I will be fined for smuggling if I declare my food, plant, and animal products is dismaying.

The question of whether the beagles, as animals, must declare their own products is unanswered, as is how best to declare them in polite company.

That said, a little traveling music:

The Handsome Family - All the Time in Airports

When I need to make a court appearance in downtown Los Angeles, I generally hop on Los Angeles' Metro Rail light rail system. There is a station convenient to my office, and another downtown convenient to the county courthouse, and the roundtrip fare is much less than the cost of parking.

As with most any other public facility, Metro Rail stations come equipped with helpful signs to alert passengers to the Do's and Don't's of Good Transit Citizenry.

Here is an example, posted on a pillar in the station near my office: 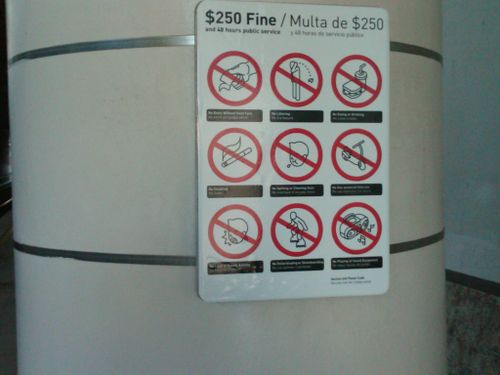 So many rules, so much good advice, and all conveyed in the three official languages of California Public Spaces: English, Spanish, and Pan-Global Semiotic.

You don't have to be a Harvard Symbologist, or literate in English or Spanish, to appreciate the elegance and clarity with which this sign conveys its Helpful Hints on good Metro Rail behavior.  Just one look, that's all it took, to interpret these universal signifiers:

"We Warned You It Was Sticky" 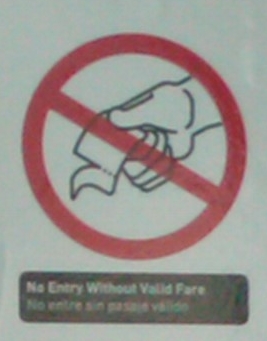 "Forward and Lateral Passing Only" 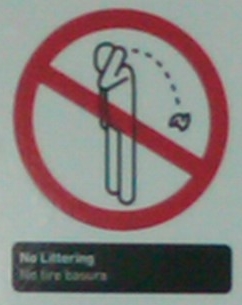 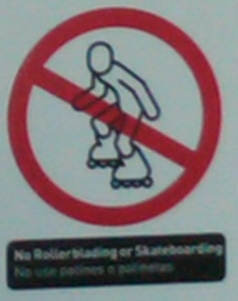 [Posted on the advice of the Brussels Transit Authority.] 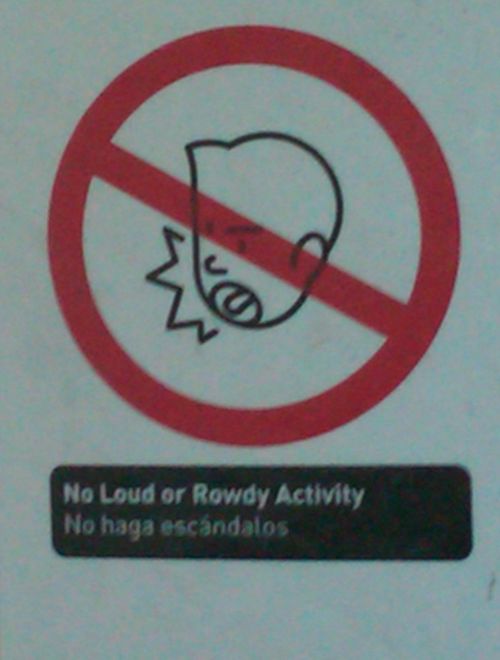 Every Picture Tells a Story, Doughnut

One last vacation-related post, a week after the fact.

As we traveled through the Four Corners region, we had semi-brushes with stories that were topping the news in places that we visited.  Here are two photos that I took -- in an old-fashioned chemical way -- that vaguely relate to them. 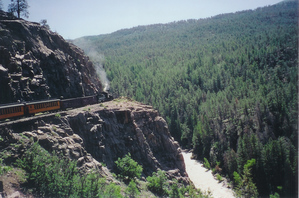 First, a photo of the Durango & Silverton Narrow Gauge Railroad as it rounds the famed horseshoe curve heading north along the High Line above the gorge of the Animas River.  Because the spot permits those on the correct side of the train their best shot of the locomotive on the entire trip, you can imagine how many hundreds of thousands of photos there must be that closely resemble mine.

[Film buffs may be interested to learn that the High Line begins just north of the Rockwood Cut, which was transformed with papier mache into a tunnel for purposes of Mike Todd's Around the World in 80 Days and which also served as the spot at which the title outlaws jump atop the passing train in Butch Cassidy & the Sundance Kid.  Butch and Sundance's famous leap from the cliff was shot a mile or two south (near Baker's Bridge), although the wonder of film editing permitted their landing in the water to be shot someplace else entirely.]

The news story that goes with this photo is a sad one.  Several miles north of this spot, and for most of the rest of the way to Silverton, the track drops down from the cliff and runs immediately alongside the Animas.  Just before noon last Friday, June 17, an hour or so after the above photo was taken and some sixteen miles or so further along the tracks, our train passed by a group of 3 rafts heading downriver.  The lead raft held only a guide, the other rafts carried four or five passengers each, including additional guides.  Everyone smiled and waved.  I am reasonably certain that the group we saw was this one, which ran into severe trouble about an hour later:

A local rafting guide known for his robust sense of humor and a tourist from Texas were identified by authorities Saturday as the men who died on a commercial rafting trip on the upper Animas River.

Bogenrief had been a commercial rafting guide with Durango-based Mild to Wild Rafting for at least five years. Local rafting guides said he was renowned for his disarming jokes and his fondness for the challenging upper Animas River.

High water this year has led to treacherous conditions on rivers. There have been other reported deaths in Colorado this season, Knowlton said.

The two men died Friday after a raft guided by Bogenrief flipped in the second drop of Ten Mile Rapids, a long stretch of turbulent whitewater north of Needleton in San Juan County.

There were five people in the boat, said Kenneth Blazzard, a tourist from St. George, Utah, who witnessed the accident from another Mild to Wild raft.

Bogenrief briefly turned the raft upright before falling out, Blazzard said. No one made it back into the raft, he said. Three survivors made it to the banks of the river, while Bogenrief and Licona were quickly sent downriver by the racing rapids.

The southbound train that stopped to pick up the party later in the afternoon was not ours.  We did not know anything about the incident until we saw the local paper the following morning, as we were getting ready to head south to the area of our next photo, which relates to an interesting but not so tragic story. 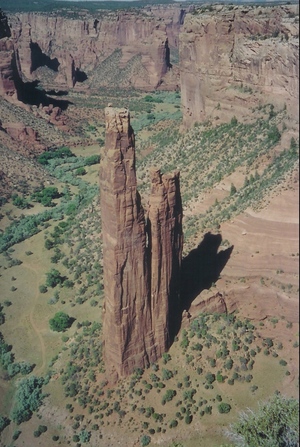 Here we have a picture of Spider Rock, which stands at the bottom of Canyon de Chelly, Arizona.  Canyon de Chelly is unusual among the units of the National Park Service in that it is operated in cooperation with the Navajo Nation.  The Monument exists entirely within the Navajo reservation, and the Navajo themselves have lived and farmed on the floor of the canyon for several centuries.  Because of that occupancy and because of the Navajo's sacred associations with the landscape -- Spider Rock, for example, is associated with Spider Woman, the supernatural being from whom the Navajo first learned the art of weaving -- access to the canyon floor is restricted: with the exception of one trail to the White House Ruin, visitors are not permitted to enter the canyon below the rim except in the company of an approved Navajo guide.

Given the range of interests in play, the 80-year old arrangement between the federal and tribal governments occasionally shows some strain, as evidenced by this story from the Navajo Times -- on the front page when we were passing through a week ago -- concerning a protest by Canyon residents directed against claimed Park Service policies and plans in and around the Canyon:

A group of Canyon de Chelly residents are tired of living in a time warp.

'We are not allowed to have modern homes because it's a monument,' Gorman said. 'But to me, it's like being deprived of life. I'd like to live there comfortably.  But we're only allowed to live in a hogan with a dirt roof.'

She said the reason for the park service policy barring modern homes is for the benefit of tourists.

'It's like we're being on display for tourists,' Gorman said.

The story is somewhat vague concerning both sides' positions, and the Park Service seems not to have had a really authoritative spokesperson available to discuss the protest or the residents' concerns.

I assume the residents' "modernization" plans would not include a high rise casino with Spider Rock in the atrium lobby.

My Mind's Still on Vacation (but my Weblog's Workin' Overtime)

Hello, all.  This Fool has now returned from one of the Best Family Vacations Ever.  Because that Vacation was computer-free, the return has entailed sifting through and reading or deleting a couple of hundred accumulated e-mail messages, sifting through and (mostly) not reading several hundred weblog posts accumulated in the RSS feed, identifying all the new court decisions that came down while my back was turned that will need to be digested and discussed at the Other Weblog and, of course, the necessity of preparing my report to the class on What I Did on the aforementioned Vacation.

Here is an inventory of places that we visited:

One of the things I enjoy about resorts is the concierges. They are like reference librarians for the frivolous and self-indulgent.